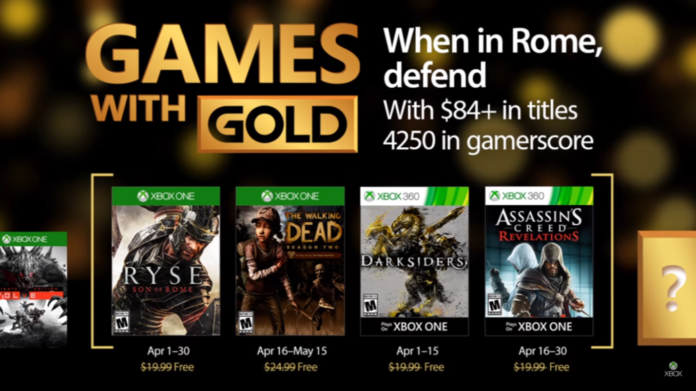 Following the apparent leak of April’s Games with Gold titles earlier today, Major Nelson has confirmed that the titles in the leak were indeed accurate. Making the announcement on his blog earlier, we see four excellent titles hack and slash their way to Xbox consoles in April. Check them out below:

In his post, Major Nelson, revealed that Ryse: Son of Rome and Telltale’s The Walking Dead: Season Two will be heading to the Xbox One.

On Xbox 360, there is the excellent, Zelda-esque Darksides as well as Assassin’s Creed: Revelations. Don’t forget that means there are four titles on the Xbox One (two Xbox One titles and two via backwards compatibility from the Xbox 360) and two titles for Xbox 360 players.

You can find more information on the titles that will be available during the month of April 2017 for Xbox Live Gold members below:

Ryse: Son of Rome ($19.99) will be available through the whole month of April, from March 1st until April 30th.

Below are the titles you can download on both Xbox One and Xbox 360:

Assassin’s Creed: Revelations ($19.99) will be available from April 16th through to April 30th.

If you’re a gold subscriber, throughout the month of April, that is a possible total saving of $84.96 worth of new games if you decide to install each title. I personally think that this is one of the best offerings Games with Gold has had so far. Although I will not be downloading any this month as I have seen them all through to completion. That being said, it is great for anyone looking for some new games to pick up. They’re all excellent fun.

You still have to ability to claim your free titles for the Xbox One via the website. You can do this even if you don’t own the console. Secure your free licenses for the games so that when you upgrade in the future they’ll be waiting for you. Continued access to those titles will be available providing you keep a gold subscription.