I really feel for Lightning McQueen in Cars 3: Driven to Win. It seems most of his cadillac compadres have decided he is not what he was. So much so that they use every opportunity to ‘have a go’ and put him down. I worry about his self-esteem and his mental well-being, being constantly put down; being told he’s past it. Can’t be easy to hear.

I haven’t seen Cars 3 in the cinema yet; from what I understand the premise is the same (or at least very similar). Lightning McQueen wants to prove his relevance and show he is still capable of competing with the best of the best in racing terms. Yet there are few who believe he can. To prove himself, he must compete against familiar faces from the Cars franchise and defeat them all.

That’s the long and short of it, essentially. To do this you must complete races, championships and special race events. To prove your proficiency as racer you are tasked with completing 136 different ‘challenges’. Each of these challenges will increase your standing amongst the higher echelons of the racers. At certain milestones you will get to challenge key figures from the Cars universe in order to prove your worth and progress. 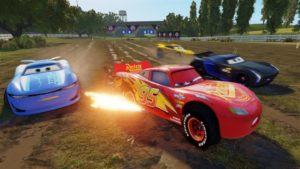 You don’t have to just play as Lightning McQueen, however, you can pick up to 20 different racers from the series and use them. All of them have slightly different handling styles. Though this doesn’t seem to be indicated anywhere when selecting your character. You have to just give them a go and see which you prefer. Personally, I really like using Mater for trick events, he seems better at than some of the other cars I have seen so far.

There are a large number of tracks, some of them being tracks from the Cars 2 video game. Each track is fun and have a variety of routes and shortcuts. Some of the fun in this game is finding all the best routes as some game modes will rely on them more heavily, if you want to out perform the competition.

There are a number of game modes per track and each of them provide something different: 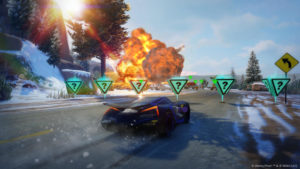 If I’m honest, a lot of the cars don’t feel like they have much speed unless you are using your boost. To get boost you have to perform a variety of different skills and tricks to increase your boost meter – similarly to how you do in Burnout. Most of these tricks are done using the right analog stick. Flicking the right stick down will flip your car around and you will start driving backwards. Flipping it to the left will flip you onto two wheels, giving you a boost increase. You can also perform tricks in the air when you jump off a ramp.

The tricks and boosting skills work really well and add a lot of fun to the races, meaning that even the standard races don’t feel dull. Secondly, you start driving much more garishly as a standard, which is cool. Driving in these different ways will also help you complete challenges, as well as improve you skills and knowledge of the tracks. There are specific glowing blue sections on the track that will give you a boost to your boosts if you perform the correct trick (such as driving backwards) over them. You can also increase your boosts by ramming your opponents (using the right stick) and collecting fuel tanks dotted around the level.

The controls are simple and the game handles really well. Aside from some seemingly unfair patches of rough terrain that slows you down occasionally, the game plays really well. The objectives and weapons are satisfying and you never feel cheated while playing. Even though you will assume that Cars 3: Driven to Win is aimed at the younger audience it’s never overly easy; there are three difficulties for each mode. On top of that, some of the challenges you need to complete will require some skill and full use of all the different game modes and abilities.

Some of the challenges needed to complete the game 100% will require you to have friends, or at least a casual acquaintance to play with. There are some multiplayer specific challenges. Cars 3: Driven to Win has local multiplayer only, up to four players on split screen. It always strikes me as strange when a game doesn’t include online multiplayer but includes local multiplayer (see Overcooked) or vice versa (see Halo 5). Especially when you might want to finish a game its completion, but you might struggle if you can’t get anyone to play it with you. 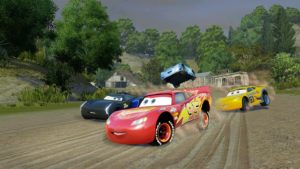 Cars 3: Driven to Win is good-looking game and stays true to the aesthetic of the series. The characters all move with the same design as in the films. I particularly like the way the eyes are animated, a simple thing, but important to get right. Though it probably won’t win any “best looking game” awards, it certainly does the job and it would be very easy to phone it in. There’s some really nice moments though. Especially considering that the game is available on previous gen.

The tracks have a decent variety, though, true to many racers, mixes us up some of the same course to provide different routes. Not that that’s a bad thing, of course. The collectibles are easy to spot as are the boost strips and jump ramps. On occasion a few of the tracks felt out of proportion to the size of the racers, though this is the exception rather than the rule.

If I had any real complaints, it is probably with the sound (and lack of online multiplayer). The music is really funky and has an uptempo country blue-sy twang to it. The sound effects are functional enough for sure. The music is fairly repetitive and it is noticeable on some of the longer tracks when the music repeats. I didn’t find the music to vary enough between the different races, but this is a minor complaint in the grander scheme of things.

However, what was noticeable was the limited voice acting. Though the actual voice acting is really impressive, with Larry the Cable Guy returning to voice the famous (infamous?) Mater the Tow Truck and Nathon Fillion as Sterling, you’d be forgiven for thinking that all the voice actors from the films have been involved. The fact is that there’s probably two or three voice lines per character, meaning a lot of repetition. 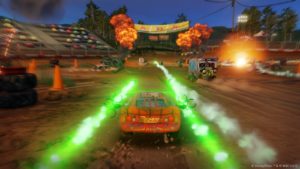 Given the number of tracks, game modes, local multiplayer and 136 different challenges. There’s certainly a lot to do in the game. For the younger audience I would assume Cars 3: Driven to Win will provide endless days of play. Especially during the summer holidays. I found myself getting through the game fairly quickly; unlocking three stars for many of the events (except for ‘Best Lap’, I suuuuuuuck at that).

There’s a lot of content and it all fits well into the lore of the Cars universe.  Any Cars fan will be happy with this game. I have certainly had a lot fun playing the game. I will certainly be going to go for that 100%.