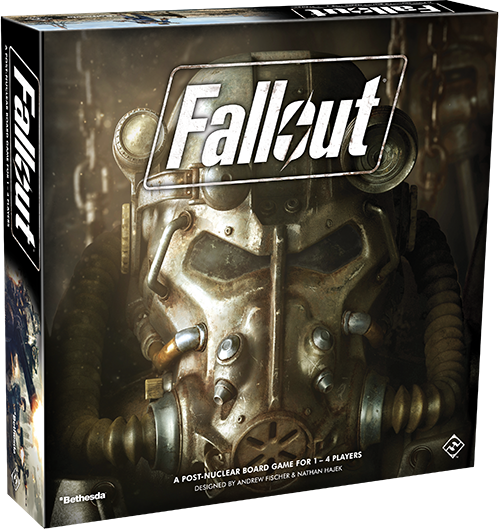 Last week, Fantasy Flight Games announced they will be releasing Fallout: The Board Game, based on the hit video game series by Bethesda Softworks. The Fallout board game is set to release in Q4 of 2017.

As Fantasy Flight stated in their press release:

“Fallout is a post-nuclear adventure board game for one to four players. Based on the hit video game series by Bethesda Softworks, each Fallout scenario is inspired by a familiar story from the franchise. Survivors begin the game on the edge of an unexplored landscape, uncertain of what awaits them in this unfamiliar world. With just one objective to guide them from the very beginning, each player must explore the hidden map, fight ferocious enemies, and build the skills of their survivor as they attempt to complete challenging quests and balance feuding factions within the game.”

What this means for gamers is that we will be able to take our love of the Fallout franchise to a whole new level. The game will have many mechanics which make for a strong board game. It should also be near-infinitely replayable because it will be a cooperative game with varied scenarios and quests. To add to that, your characters will develop through their experiences as they interact with the game, gathering gear and abilities.

If you are a gamer and you haven’t been playing board games in a while, this might be the time to come back to the old table-top format. A lot has happened in the world of board games since your time as a kid, playing games like Monopoly and Risk. Tabletop games have developed to tell stories, and develop characters. Most game makers have improved on those early board games by developing plot, characters and sparking the decision-making abilities of players. People are able to get involved in their games in a way that is similar to what we all love about video games, but the difference is that each time you play it will be a different experience. It is like playing a Telltale game on your kitchen table.

Fallout will take many of these mechanics from popular tabletop games and combine them with the plot and characters which made the Fallout franchise such success in the first place. Fantasy Flight is one of the premier game makers in the world today, having created some of the best Star Wars tabletop games, including Star Wars: Rebellion, A Game of Thrones, and The Lord of the Rings. Their best so far however, might be Twilight Imperium.

Just writing all of this, I’m getting psyched to go play board games…Or Fallout.. Or both!