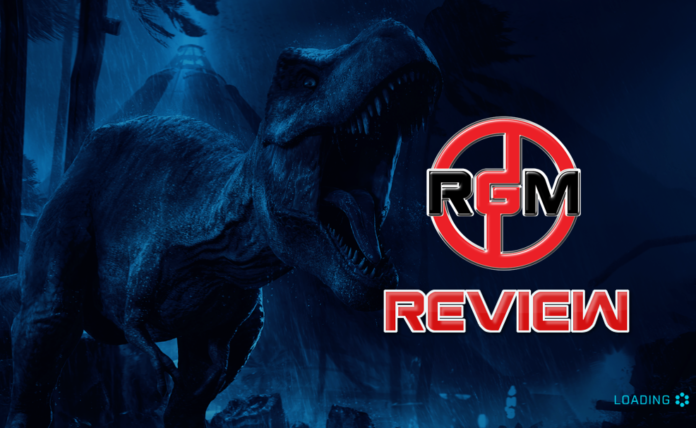 “All major theme parks have delays. When they opened Disneyland in 1956, nothing worked!” – John Hammond

“Yeah, but, John, if The Pirates of the Caribbean breaks down, the pirates don’t eat the tourists.” – Dr. Ian Malcolm

Ahhhhh the memories. Watching Jurassic Park back in 1993 for the first time, wide eyed, captivated by the staggeringly large and majestic dinosaurs on the screen. I couldn’t even tell you how many times I’ve watched that movie over the years but I know it’s in the double digits.

Coinciding with the release of the latest movie in the franchise, Fallen Kingdom, the release of Jurassic World: Evolution from the team at Frontier Developments, on Xbox One, PlayStation 4 and PC, couldn’t be more timely.

With Jeff Goldblum, Bryce Dallas Howard and B. D. Wong carrying on their roles from the Jurassic Park film series, you feel right at home as this business simulator kicks off and prepares you for the tasks ahead.

This is a business simulator, so as you would expect there is a strong focus on ensuring you create a balance between your guests visiting the park, and its inhabitants.

You are in charge of getting this park set up with not only enclosures that are adequately equipped to house the island’s ancient inhabitants, but also businesses to ensure that your valued guests leave with empty pockets. 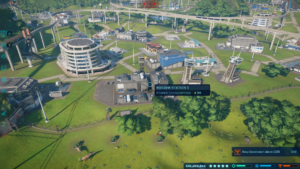 Everything from fast food outlets, to gift shops, a monorail, bars, all sorts of money absorbing business are available for you to build, select the number of staff, choose the item that is being sold and how much per unit you are selling them for. This all works towards your income per minute, which comes into play further down the track.

Along with setting your park up, you also need to mange competing priorities between the three ‘factions’ which are the: Science branch, Entertainment branch, and Security branch. Each faction competes for your attention and offers a variety of missions with enticing rewards. You must manage the time you spend working on each faction’s missions well, as paying too much attention to one will leave the others feeling unloved. This can result in some rather annoying outcomes.

As you further progress your standing with the different factions you unlock various upgrades for your operation centres. These centres are the: Expedition Centre, Hammond Creation Centre, Fossil Centre, Asset Containment Unit (ACU), and the Ranger Station. 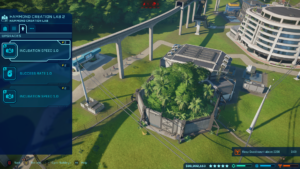 Each of these have their own functions and upgrades which will take time to unlock, however greatly improve your effectiveness in the game. Spending time researching the information you need to make these upgrades is highly recommended from the word go!

Once you have your park underway and fossils start rolling in from your expeditions, you will start to increase your genome collection which will allow you to incubate and modify the genetic makeup of various dinosaur breeds – and that’s where the dangerous fun beings.

The more you research key operational buildings and send your teams on expeditions, the more modifications you will unlock. These range from simple things such as changing skin tone to suit the environment, to more challenging decisions such as increasing intelligence, agility and a variety of other morphs that whilst they may look cool, can be the undoing of a lot of hard work if not carefully thought out and implemented. 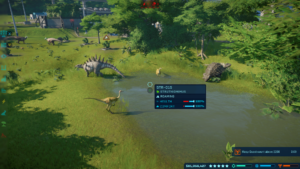 You aren’t limited to just commanding your minions to go off and complete simple tasks for you either, you have the option of driving the ranger jeep yourself to fix busted down fences, tranquilize a manic dino, or even take snapshots to sell off to the entertainment faction.

If you haven’t yet seen Fallen Kingdom, playing Jurassic World: Evolution puts you right in the mood for it along with a marathon re-run of the franchise.

Whenever you have a game that is heavily laden with commands and button inputs, it can easily loose its way and become convoluted in processes. Jurassic World: Evolution was in danger of falling victim to that very early on in the game due to the lack of guidance provided when you first start off. Luckily, because the control system has been very well thought out, you are easily able to figure out where to go next, what to build or destroy, and what your next action is, from a variety of prompts and controls that guide you onwards. 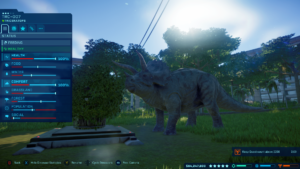 The menus are well set out, with minimal overlap. The building menus are clear and concise, whilst a tad simple, but serve their purpose none the less.

The customization options are fun but again, a tad simple. I understand why the customization in building has been kept to a minimum, as the focus should be more on the day to day financial management of the park and the dinosaurs as opposed to worrying about planting dandelions and clover.
As you progress throughout the game you are presented with options that enable you to really dig into the nitty gritty of DNA splicing and park management, or you can leave things running at a higher level to make things less challenging.

All in all, the games mechanics are well thought out and implemented.

Each island is provided with its own weather system, some more formidable than others, which brings a whole new level of game mechanics into play. Ensuring that you have built sufficient storm warning buildings and underground shelters for your guests are both very real considerations depending on the island that you are currently managing. Getting to know your environment is very important. 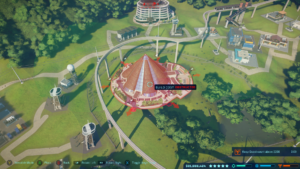 The mechanics behind mission progression can be a tad painful at times, with missions offered to you that you simply can’t complete at that time. If you’re anything like me you don’t like abandoning missions however, this game gives you little option as you can only have three active at a time.

Building placement will get on your nerves as well. Being told your intended building spot can’t be had due to seemingly non-existent obstructions and topography constraints gets old very quickly. Spending 10 minutes levelling what appears to already be flat ground so that I can build is not on the top of my “fun things to do today” list.

This is an element of the game that could have been managed better.

The beautiful thing about a business simulator is you can knock it all down, metaphorically speaking, and start again whenever you want. 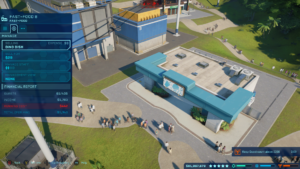 Lessons learnt from your first attempts at building a park can be taken on board and avoided with a re-run of the island.

You can choose to restart as many times as you want, continually refine your processes, DNA coding and even strategy for unlocking certain upgrades to provide you with the tools you need to take your experience in a certain direction earlier on in the game.

The further you delve into Jurassic World: Evolution the more the “bigger picture” is revealed and I guarantee, your plan of attack for your next run through will be completely different.

Graphically, you have nothing to complain about. The animations for releasing dinosaurs from the Hammond Creation Centres are very detailed, with appropriate representations of the various breeds of dinosaurs. The weather effects everything from the appearance of structures to the blades of grass, with stunning lighting on islands that never see the shadows of night. 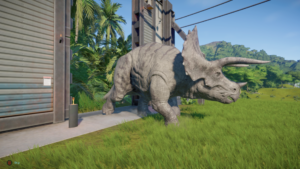 Jeff Goldblum, Bryce Dallas Howard and B. D. Wong carrying on their roles from the Jurassic Park film series with brief intervals of voice acting to help fans of the film franchise feel at home, with cheesy one-liners that constantly remind you that you’re dealing with a species of animal that has the potential to unleash havoc at a minutes notice.

With the iconic Jurassic Park theme music running in the background you will catch yourself humming along as your building your parks, or even randomly as you cook dinner – it gets into your head!