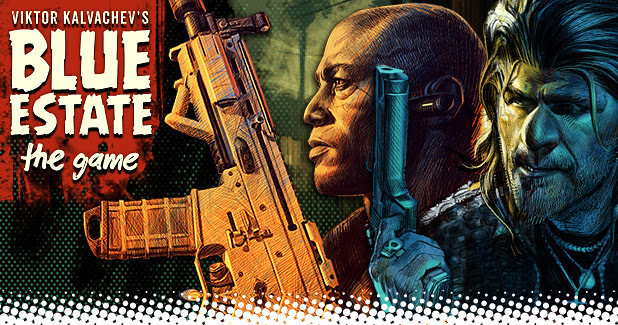 Blue Estate has taken this technology and run with it, creating a Time Crisis-esqe style game that is full of quirks and humor. This is the first of what I hope will be many next gen rail shooters for the Xbox One.

Based on the comics from Viktor Kalvachey, Blue Estate harnesses the motion detection technology in the next gen Kinect to allow you to feel more involved in the game and also proves for some very entertaining moments when you can’t quite work out what to do and find yourself doing ‘the robot’ dance moves unknowingly in front of your family.

You are not, however, restricted to using the Kinect; if you prefer the good old fashioned way of getting stuff done then feel free to pick up your controller.

Available to you is a story mode, arcade mode, or a very entertaining 2 player local multiplayer mode, however I do recommend that you take on the story mode to begin with as that’s where the real entertainment lies.

You begin your short journey as Tony Luciano, a violent psychopath who just also happens to be the son of LA’s crime boss, Don Luciano.

Then we have the discharged ex-navy seal, Clarence. As the Don’s top killer, he is tasked with cleaning up Tony’s mess, a job that is seemingly never ending. What story is complete without a disgruntled ex-military mercenary?

This is a game that you can really just have a lot of fun with. There is no real strategic thinking required just point, shoot and laugh; it’s a great way to unwind.

The story line is very easy going which allows for a lot of comedic references throughout the entire game. I caught myself laughing on many occasions.

The humor in this game is to be taken as exactly that though, just humor. Something to have a giggle at. There are a couple of almost crossing the line comments here and there but as long as you take it all in good humor you will rather enjoy the quirks of Blue Estate.

to developers, I felt like the Kinect controls should have been slightly more reactive. However, if you have an old Wii gun laying around, I recommend digging it out as I found actually holding something in my hand made it a lot easier for me to aim. What is more enjoyable than slinging a gun around a la duck hunt style and taking on the enemies in Blue Estate via Kinect?

While many gamers may enjoy a game with rather long levels, Blue Estate is not a game that should insist on these lengths. By the end of roughly two levels my arm was definitely getting it’s work out from the Kinect and feeling a bit heavy.

Despite the slightly clunky controls of the Kinect and the lengthy levels, I found Blue Estate to be rather impressive and a lot of fun. Overall I rate Blue Estate for a game of its genre, a 4.5 out of 5 – definitely worth the purchase.