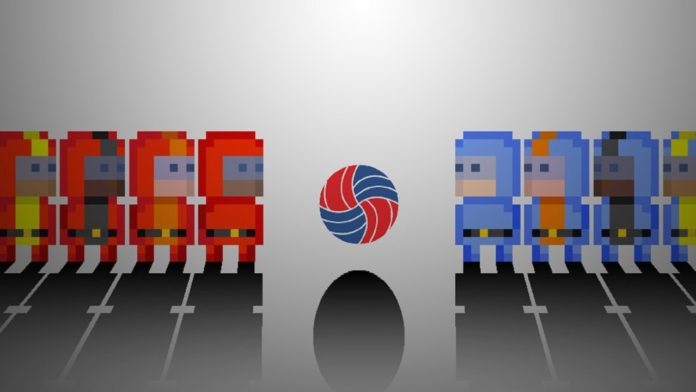 Making its debut as one of February’s free Games with Gold on the Xbox One, #IDARB has had glowing reviews due to its high paced, laugh a minute, interactive nature.

I must admit I was surprised to see an 8-bit game take off so well on the next-gen console, but once you have a chance to play it for yourself you really can see why it’s been so well received.

Following on from a live interview I conducted with Mike Mika, the lead developer from Other Ocean Interactive, I have been lucky enough to sit down with him once again and pick his brains a bit about the development of the game, the standing of indie games in this current gaming climate, and where Other Ocean Interactive is heading from here.

Bella: “Indie games are really starting to finally take center stage this year and #IDARB already has almost a cult like following before it’s even released in the market place. Why do you think this is?”

Mike: “I’m not entirely sure. Personally, I find myself most interested in the

portfolio of Indie games coming out this year (2015). It feels, at least to me, that indies take far more creative risks. I love big franchise games as much as the next person, but they are predictable for good reason. Indie games surprise me more often and I like surprises.”

Bella: “A common misconception is that games released on next-gen consoles should all have next-gen graphics. Unknown too many is that #IDARB I actually running on some impressive specs, can you tell us about that?”

Mike: “I like to think that next-gen games should all have next gen game play,

not just graphics. So what if it doesn’t look like Gears of War? So what if it is 2D? It’s like saying you can’t watch a Miyazaki film because you only watch Pixar movies now. #IDARB is unabashedly 2D, but it boasts some next-gen perks. We support Twitch and Twitter, the Kinect, and push a lot around despite its simple presentation. The number of people that have come to me and apologized for pre-emptively dismissing the game as “just another 2D indie game that belongs in the 80s” is amazing. They almost didn’t try the game and once they did, now they understand what it is and enjoy it. They’re some of the loudest voices in our word-of-mouth campaign. I watched the tide go from “This is the worst Games with Gold game yet” to “This is the best Games with Gold game yet.” The former opinion was pre-launch, the latter was about two weeks after.”

Bella: “I’m sure most people have had at least some exposure to #IDARB by now but for those that haven’t can you explain to us what exactly #IDARB is and why this game is a must for the download list this February?”

with a myriad of sports rules and objectives. It’s also a spectator focused game that allows anyone watching any specific game to interact through Twitch or Twitter. You can also customize your teams, music, and logos. It was built to be a fun local multiplayer game for up to 8 players. It’s free! It’s small! Why wouldn’t you take a chance on it?”

Bella: “Personally, I love the ability to be able to create my own characters and download them using the QR code option, have you got plans to expand on that or introduce other quirky features like that to the game?”

Mike: “We do! Not everyone has a Kinect, so we’re working on other ways to incorporate creations. Also, we have big plans for DLC and on-line play later that will come with some improvements to the content creation suite.”

Bella: “Your studio, Other Ocean Interactive, has been around for many years and this may not be the first game that the readers have experienced over the years from you guys. What games from past development could we possibly see brought back to life again on the Xbox One in the future?”

Mike: “I’d really love to make a sequel to Dark Void Zero. It was our Metroidvania DSIware game that was one of the best games we produced. We’ve talked about other games we’ve worked on, even before we became Other Ocean, and I think we’re more excited about making new games with what

Bella: “For those that are trying to make a break into the development industry and have no idea where to start or how to promote themselves, what advice can you offer them?”

Mike: “By whatever means, no matter how much of a hack, figure out how to make a game. Use Game Maker, Unity, or any other tool. Make as many games as you can. I started making games on the Commodore 64 when I was a kid, and I probably started about fifty projects, probably finished about five of them, but the process taught me a lot about design, engineering, art, music, and animation. In fact, try your hand at all aspects of the development process. You really need to understand every component. Make yourself, as much as you can, a master of all aspects. Walking into an interview with a demo reel and a bunch of games is pretty much the best way to get in. The other way is to find any way in. A lot of incredible talent came from the Quality Assurance route. Working in QA exposes you to the entirety of a game production, warts and all. You learn about the inner workings, the complications, and you get to see the process almost first hand. So many great people in the game industry today came from QA.”

Bella: “Thank you for your time again Mike, it’s always a pleasure chatting with you. I am really excited to see what you have planned for us not only with #IDARB but new instalments from your studio.”

Mike: “Keep in mind that we are working on updates and we’ll have a lot of news this year in regards to #IDARB and what lies beyond. I encourage you to keep sending in suggestions and letting us know how we can make the game better. I’m floored by the response so far, and it can only get better!”