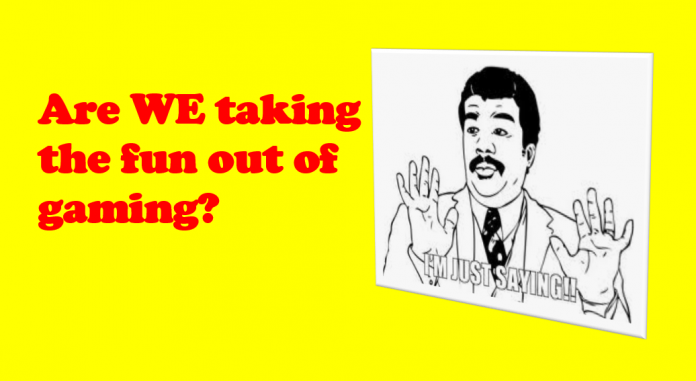 There used to be a time, a long, long time ago, when gaming was about playing games, meeting new people and having fun. We seem to have forgotten that and instead are now focused on only specs and what someone else has that we don’t.

The gaming community is becoming toxic due to the console wars and gamers picking apart everything that the leading companies do. There is no such thing as a proper reveal these days due to this. Someone, somehow always finds a way to ruin these reveals by leaking information.

At what point did we as gamers become so self-entitled? Do you want to know who is running gaming? YOU.

Those of you that demand deliverables and answers from Microsoft and Sony, those who incite the console wars, those of you that on a daily basis spread hate on social media because you seemingly lack the ability to communicate with another human being in a respectful manner.

Aren’t you tired of it? Don’t you wish you could just log on to play and discuss games instead of having to defend your console choice?

Harassing developers, creating a divide in the community, all for what? To create a name for yourselves in a limited bubble on social media?

Enough is enough, be worried about what is in your own backyard and not your neighbours, get off social media for at least 5 minutes and actually play some games.

I’d like to see you all get back to actually enjoying games again instead of this new ‘game’ everyone seems to be addicted to which is the console wars.

Stop arguing, stop hating, stop taking advantage of the community and start gaming. You will be amazed how much more fun you will have hanging out with your mates rather than arguing with a stranger on social media.

Oh yeah, and on a side note, if you don’t like what I have just had to say don’t reply with some hateful comment trying to put me back in my place because you will only be proving my point!