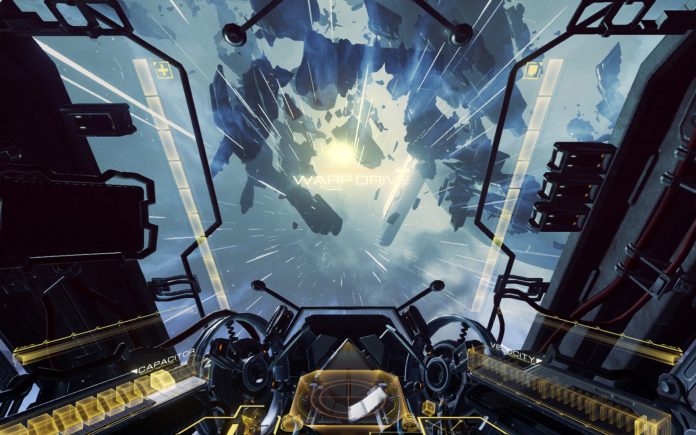 This past weekend I took a trip out to Sony PlayStation Experience event in California. It was a chance for me to try out the much awaited PlayStation VR (PSVR) device formerly known as “Morpheus”. Now, I have been waiting to try out this device since its announcement and I have been envious of all the folks that have been able to try it out for themselves these past few months, so my excitement was at a fever pitch when I was finally able to stand in a line and strap on the device for the first time.

The first game I played on PSVR was Distance which was at a far corner on the second floor of the event with a line that was about 20 minutes long, however before I get into the details of the game, let’s talk about the hardware. When it was my turn to go, I ran to the chair where the device was and held the PSVR in my hands. It was lighter than I thought it would be with pretty decent build quality. The blue lights that accented the device made it look like something from the near future that could possibly be worn as a fashion accessory. It was nowhere as cheesy as I thought it would be.

Before I placed the device on my head, I had to get it adjusted which the attendant did in about 3 or 4 seconds. It looked fairly simple yet I did not get a chance to really look at the exact mechanics on adjustment – I was just in a rush to play the game. I wear glasses so I was worried that it might interfere with the fitting of the device on my face but it was not really a problem. If you wear glasses you should have no issues with this device.

The front part slid over my eyes and at first there was a little gap between my forehead and the unit itself but after wiggling it a bit, the gap was gone for the most part. The device was surprisingly a lot more comfortable than I thought it would be. Overall, it exceeded my expectations in the hardware department.

Now on to the experience of game itself. Distance is a futuristic racing game where it’s not you Vs. opponents, but instead you Vs. the track. My main concern as far as the PSVR goes was that the display would not cover my entire peripheral vision. I am happy to say that it does in fact cover most of your vision to the point that your brain is tricked into being somewhere it isn’t. After all, that is the point of VR and it delivers. It isn’t 100% but unless the unit is mounted on your head improperly, you should not see where the display ends.

During my drive in this game the head tracking was reasonably fluid as I looked around the car and out onto the track. I didn’t need to recalibrate at any time during my demo.

I was simply blown away at how accurate everything felt when I looked around.

My one gripe with the experience is that the resolution seemed a bit lower than I would like. It was not hard to make out the pixels on the display for this game. It could have been due to not a lot of AA being used but it was a bit concerning as this was the first VR game I played. Some might say it’s a nit-pick but it is something to note. My time with this demo was a bit short as I only did the tutorial but I had some moments where I almost fell out my chair as my car flew into the air and off the track. If that doesn’t give you a picture of how immersive this is, then I don’t know what will.

The second PSVR game I played was Eve Valkyrie. Now, the line for this game was over 2 hours long but I just had to play this space sim shooter and WOW! It was well worth the wait!

The moment the PSVR was placed on my head I found myself in a hangar bay with the option to choose from 1 of 3 different ships in front of me by nodding my head in their direction. I chose the smallest ship on the left as it looked a bit more nimble than the rest. As this was going on, the attendant was recapping the button controls in my ear. Once I heard “L2 for missile lock and Triangle to fire”, I was ready to go.

Once I was inside my ship and was able to look all around the cabin. I was in awe at how even more immersive this was than my first experience. As the A.I. voice counted down to 1, the hair on the back of my neck started to raise. “Is this for real?!” I asked myself. At that moment, my ship ejected from the tube in my mother ship, I was already breathing much faster due to the rate of acceleration of the ship. Even though I was amazed at the fact that I was in a space attack fighter, I still had the thirst to take out as many of my opponents as possible. Thanks to the head tracking on the VR, acquiring targets was a breeze. I simply had to look in their direction, arm my missiles, lead them for a bit, and fire away. Oh, you WILL be moving your head all over the place to track targets too. Not unlike what you see when pilots are dog fighting in a movie. I couldn’t admire the planets in the background for too long because my opponents were trying to take me out and they had succeeded. Explosions were bright, loud, and dramatic, and in the case where I blew up, sudden to the point I flung my head back in amazement.

I did not notice any slow down during all of this either. My resolution concerns from the previous game were not really there this time around. The action was so frantic that I had no time to think about it.

This game was  superior to Distance from a graphical standpoint so unless I am really looking for something to nit-pick about, I don’t think it is that big of a deal. I’m sure in time, people will get more critical as more games come out for VR.

As my time with the demo ended, I looked down at the PSVR and said to myself, “This is future!”. There are folks out there who will say it’s just a gimmick but I did not met one person who has actually tried VR and felt that way at the PSX event.

I want PSVR, Oculus Rift and HTC Vive to succeed. This technology is too awesome and immersive with so many new experiences and applications to be had for it not too.

As far as I go, I’m sold on the technology. Let’s just hope the price tag doesn’t scare away too many people.

If you have not yet taken a look at Eve Valkyrie here is a short trailer for you: