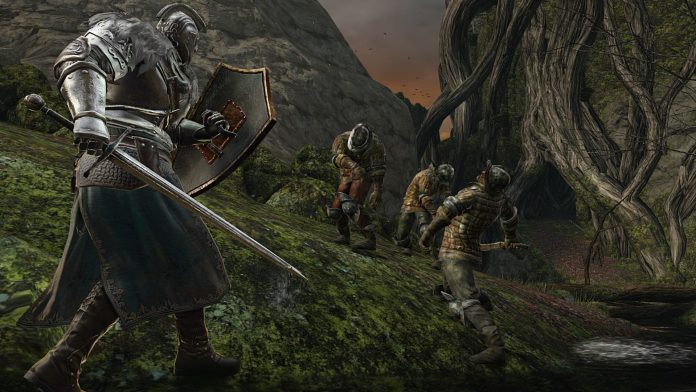 Dark Souls 2 promised multiple deaths and tons of frustration, and it does not disappoint its predecessor in taking this promise to the next level. From the start of the game you are thrown into the fog doors, any fan of the Souls series knows that fog doors indicate certain death. That nervous lump that rises in your throat every time you press the button to “enter the mist”.

The inner discussion with yourself begins about your next move for survival and to attain victory over whatever sort of monster faces you behind the fog. You white knuckle the controller as you anticipate the monstrous figure that is sure to appear in the cut scene that always comes next.

All of this pain and inner turmoil only to find that Dark Souls 2 has decided to mess with the mind of its players and hide nothing but a mere tutorial level behind the first fog door. A sigh of relief and a grunt of frustration escaped me as I figured out that now the fog doors can be used to warn me for absolutely nothing. This tool that I had used in the first game to prepare myself for certain doom had been used against me! This, among many other things have changed, many for the better, but not too worry as a lot of our old favorites have stayed the same. I will discuss a few of both, while avoiding as many spoilers as possible.

You approach your first official bonfire in a small area by the name of Majula. This is the location that serves the same purpose as the Firelink Shrine in the first game. Many of your vendors and NPCs will end up here to serve you in the best way they know how. There is however one very special character that resides in this place. With this specific character you upgrade your estus flask and character stats, that’s right you have to return to this person every single time you want to level up. It’s not as big of an inconvenience as I had originally anticipated it to be, you can satisfy all of your soul spending needs in once convenient area.

From this center location you have a few different options for progressing into the game, which path you take is entirely up to you. One direction might wield better rewards but be a bit more difficult to work through, while the other is significantly easier but rewards less in the end. The ability to choose my own path and take a different direction is one of my favorite things about this game. Not happy with the difficulty? Turn around and seek a path you may have missed. However, that path may be more difficult than the first.

This game has decided to truly inflict pain on the level grinding that a lot of people are familiar with from the first game. You can no longer soul grind because after so many deaths enemies do not respawn, making leveling or upgrading weapons and armor a tad more difficult. However, there are a few exceptions to this rule. A new type of consumable has been introduced to the game which allows enemies to reset their number of respawns in a bonfire’s area. Fantastic news right? In the fashion of Dark Souls there is a twist to this new perk, enemies are now harder, stronger, higher HP and in larger numbers. One of the biggest perks to this new consumable is bosses also respawn, therefore you can obtain their souls numerous times which accounts to a fatter soul bank. The last exception to the limited spawn rule lies in the hands of a certain covenant you have the option to join. However, naturally Dark Souls wouldn’t allow that to make the game any easier as there are certain rules to this as well. When you join this covenant, the enemies become far more difficult and will continuously respawn, excluding bosses.

You have the ability to summon NPCs and also friends into your game to assist with bosses or even areas in the game you are having difficulty with. The summoning of friends and other human players is determined by soul memory, if their memory is out of range from yours than you are unable to summon them. Luckily we have been provided with a summon range calculator, which allows you to enter your soul memory as well as your friend’s memory to determine whether or not they are close enough to join. There are a few other items in the game that can help you bring in other characters as well, but I’ll let you find those on your own. Summoning is a great way to get through tricky areas and smite bosses that you can’t seem to overcome, it can however be used to an extreme that makes the game seem easy and borderline effortless at times.

Along with more frequent summons the game has added the element of being invaded by NPC players as well. Instead of just other players coming in to ruin your trek through an area, now an NPC will come in with only one thing in mind, your death. You can battle these regularly or run away, the choice is yours, you will however be rewarded if you choose to stand and fight.

When it comes to battle style and types, all other games of this nature take a back seat to Dark Souls 2. You have a vast arsenal at your disposal from swords and shields to axes and bows. You can wield items depending on your strength and dexterity, if you are unable to wield a certain sword you can 2-hand it as long as your strength or dexterity meets half of the required stat.

Magic attacks are not short in this game either, with the newly introduced Dark Magic in the form of hexes you have plenty to choose from. Pyromancy also gets a bonus added it to it with the Dark Pyro, I did not notice a huge difference from the original but don’t let that deter you from taking it for a spin.

Jump attacks are plentiful and of course back stabs are almost necessary to bring those harder enemies to the ground. Whether you are a ranged fighter, up close and personal, or like to kill with the help of a spell, you will find what you need to satisfy that craving in this game. Some of the better weapons are rarely dropped and hard to find, others might be obtained by dropping certain items into the nest of 2 crows that just love smooth and silky. I personally ran most of the game using the same axe and just upgrading it and of course my crossbow for antagonizing enemies at a distance to pull them from crowds one at a time. Certain weapons build off of your character’s stats such as Faith and Intelligence as well as Strength so be sure to pay special attention to that when deciding on your arsenal. The biggest tip I can offer anyone is to kill them first. Simple you say? We’ll see about that. Dark Souls 2 is a beautiful game graphically. Some areas are vast and colorful, while others are dark, narrow and have a creep factor to them. There are tons of little spots you can miss in this game so I suggest searching every nook and cranny you come across. A torch has been added to your inventory for the darker areas to help navigate them easier. The torch allows you to light certain areas up and may even scare off a few different kinds of enemies and perhaps influence others to approach you. No matter where you travel to you won’t be let down by the amount of exploration and scenery that there are to offer.

While visiting the Drangleic Castle be prepared to have your breath taken by the sheer size of the castle itself. Maybe while you’re balancing on a tight rope above molten lava in Iron Keep you can appreciate the amount of death possibilities it holds. The possibilities are endless. The DLCs that come with the Scholars edition of the game do not hold back when it comes to the beauty of the game itself. Pictured here is a bit of the Crown of the Old Iron King DlC.  Crown of the Sunken King and Crown of the Ivory King are also included in the Scholars edition of the game. From snow to lava, dark to bright this game visually gave me a whole new appreciation for the series and excitement for what they may have in store for us.

In conclusion, Dark Souls 2 amazed and horrified me all in the same play through. I was not disappointed at any point with the difficulty nor was I over frustrated by it either. The game is as easy or as difficult as you make it and allow it to be. There is no shame in leveling up more if you have issues and need help, no one will judge you if you beg for help to make a boss kneel before you.

I have never had a game give me a better feeling than this one did when I completed an objective, it presents a sense of accomplishment and confidence to approach the next part of the game.

Replay value is extremely high for this game as there are certain spells and other items you can only get in NG+ and NG+++. Don’t forget to back stab and praise the sun every chance you get.

Oh and one more thing, prepare to die…. A lot.