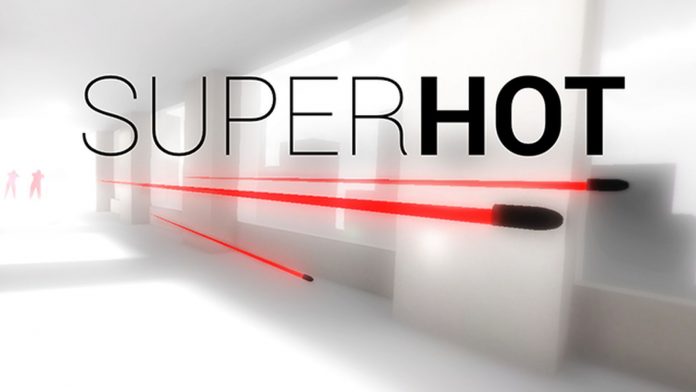 Super Hot is a very unique first person shooter. It starts you off as logging into a PC to chat with a friend. Your friend tells you about this new game and how it works, and lets you know that you can in fact try it out for yourself. This is when the fantastic roller-coaster ride stars and sucks you into this amazing new world.

The premise of the game is you basically ‘shoot red guys’. A concept so simple but yet so fun and addicting. However, here’s the twist – the game only moves when you move. You would think that this type of game mechanic would make the game way to easy but it doesn’t, in fact the game is quite difficult…..

For a written version please see below the video.

The AI is on point with its accuracy. One hit and its game over and you have to restart the entire scenario. The AI does have this way of ‘cheese balling’ you though. I spent countless efforts playing this one particular set up but no matter what I did I always seemed to die. They weren’t head on deaths either. Remember the game only moves when you move so in this case I shot a guy down a hall looked around before moving, took a few steps forward and looked around to see that all was clear then – BAM, out of nowhere I got slaughtered .

If this game is supposed to only move when I move then where in the bloody hell did this random AI come from? It’s one thing to make a game hard but the ‘cheese balling’ effect (as I like to call it) in some areas of the game just to make that scenario hard, had me raging like no other.

I truly enjoyed the style of the game, the presentation as well as the surprises the game has. Super Hot has quite a few of them as well as various Easter Egg homages to old titles. For those of you that remember Eternal Darkness on the Game Cube, you will know what I mean when you see it.

Super Hot also has no shame in breaking the 4th wall. It actually does a brilliant job of doing so.

What you can expect here is a mash up of all of the best parts of many fan favorite games and movies, from the Matrix to Portal.

Super Hot does a fantastic job of immersing you in a world of simplistic but challenging first person shooter action. As simple as this sounds I can’t reiterate just how fun it is to simple run around shooting little red guys. I also enjoyed that the developers added an in game record system for clips. After each successful round you have the option to edit and up load your clips to killstagram.com which is a site specifically for Super Hot. By visiting the website you can review your clips again, plus watch some of the memorable moments other gamers sharing your frustration and enjoyment of Super Hot have created. I spent most of my night uploading some of my crazy scenarios and checking out what shenanigans others had gotten up to. So be sure to head over and check out some of my clips by looking up: JgCujo69, and see if you can do better. I thought this feature was fantastic and honestly in this day and age more games should have a built in feature like this. Granted most PC users have built in capture apps, but this is so easy and so simple to use. You can upload on the fly and I believe it to be a brilliant option for any game to have.

I haven’t been able to put this game down. It’s truly is that much fun. Supposedly every users experience is different, there is never the same scenario twice. If that’s the case then this game is definitely like no other that I have experienced.

The main campaign is short though and I completed it in under 3 hours. Granted the campaign is super short, but there are other modes that unlock once you finish such as a time trial mode and unlimited mode where you can shoot those pesky little red guys till your hearts content. Piotr Kosmala and the Super Hot team have a very special and unique game here. In all my years of gaming (and let me tell you, that’s a lot!) I have never experienced a game like this. Super Hot will make you laugh, make you rage, and make you think outside of the box. You will beat up and shoot enemies in a way never seen before in other shooters. The Super Hot team has a bright future ahead of them if they continue to produce quality like this that brings new ideas to the table.

Overall I rate Super Hot at 9.75 out of 10 for its genre. I simply love this game and can’t get enough of it. There is so much fun to be had and truly is a breath of fresh air for the FPS genre.

Super Hot keeps things simple and that’s what makes the game so enjoyable. The games mechanics are super smooth and it plays a crisp 1080×1920 at 60fps. The controls are very responsive and the hit boxes on the enemies are on point. If it weren’t for the sometimes ‘cheese ballness’ of the AI I would have rated this game with a perfect score for what it is. It’s one thing to have hard enemy AI and it’s entirely another to have AI that’s cheesy just to make a segment harder than it is.

Overall this game is AMAZING!