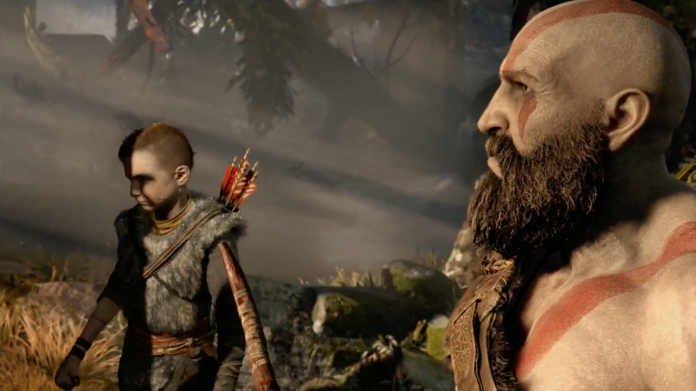 It doesn’t take more than a minute to see the marks of all God of War games: very strong muscular protagonist, a weapon that flashes with energy (this time, an axe), and combos that are as brutal as they are bloody.

The gameplay demo started with the protagonist with his son going to hunt his first deer.  Of course, things go south and creatures/demons come crashing the party.  We had a glimpse of huge creatures, bigger than the hero, fighting.  We saw the hero’s axe and his son’s bow and arrows in action and again, to finish off creatures, quick-time events were shown, which are really a trademark of the franchise.

The surprise in this game though is that it seems to be open-world: every time they were entering a new location, a “location X discovered” message appeared.  It also seems like there could be RPG elements: after the son successfully captured the deer with his bow, we saw a “skill learned” message.  The game looks very pretty and the transitions between CGI and gameplay moments were smooth and unnoticeable.

No price or release date were confirmed.

It looks like this reboot has the potential to bring the franchise to new height. The game engine is fabulous and the new world will bring fresh air to a game series that pushed the limit of what PlayStation could do in its earlier years. Are you excited for this game? Are you happy with the reboot in a new mythology? Let us know in the comments.