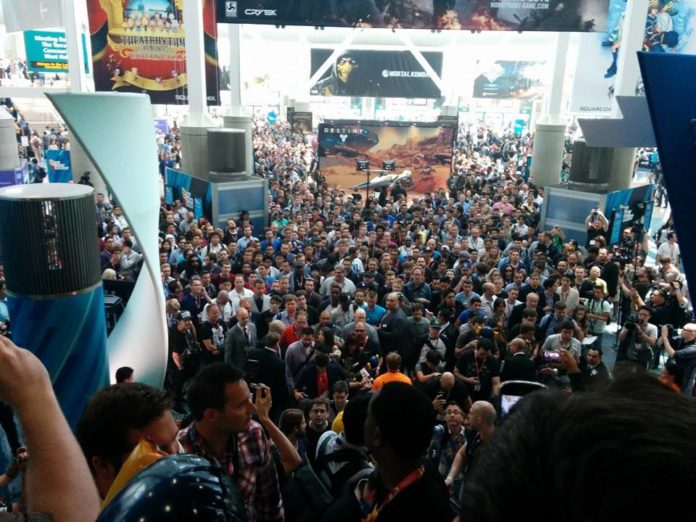 We are just a few weeks removed from the Superbowl of video game events. The Electronic Entertainment Expo, or E3 for short, is a formidable event that only the best and brightest from video game media is invited to. As a veteran of one the show,I’d love to impart onto you all some info that cuts behind the glitz and glam curtain you see on TV and tells you a little about E3 on a more personal level!

Originally, I thought that E3 was a gathering of industry professionals that were all there report on the latest games and products. You may have seen pictures of lines and all these large crowds and wondered how anyone has enough time to see all the stuff there. Most of those people are simply invitees from retail and/or distantly related fields. All those lines that you’ve seen? I’ve never waited in a single one.

If you are media, almost everything you see at E3 is booked in advance. If there was a huge line to see a certain title, there will be a press back door or a shortcut to the front of the line. Wait? What do I look like, a waiter? Besides, all the best stuff is behind closed doors.

E3’s main halls are packed with booths from your favorite developers, publishers, manufacturers and distributors. If it is on display on the main floor, the info on the product has already been made completely available online. The real stories happen in rooms tucked away in these booths, the meeting rooms on the second floor or in meeting rooms connected to the main hall. Not just any pass will let you into these areas as well. You have to have a media badge.

Some of the really cool stuff isn’t even on the show floor.

Prior to release, I got to see the Astro headsets, Hawken, brand new Guild Wars 2 content, Gaems hardware and a whole lot of other indie video games by walking OUT of the Los Angeles Convention Center. It just easier overall. I got to see the Ouya when they were still a thing. That was fun.

A few years ago, I sat in the Shrine Auditorium during the EA press conference. I saw a lot of stuff that looked cool and there was a hint about a new Mass Effect and Star Wars: Battlefront. Here’s hoping Mass Effect delivers! There was an issue though, by the time I even had a chance to talk about the cool stuff there, full high definition trailers were available online and were already getting combed through for info. The best story I have from that show is that there was some weird guy that ate all the gourmet donuts at our table. I mean seriously, there were like 8 of them in there.

This applies to other press conferences as well. Nintendo officially unveiled the Wii U while I was in the crowd and I literally had about a 5 minute head start before the general public. Next time you watch a press conference from the comfort of your own couch and wish you were sitting in the audience, you may want to think again! That also means you don’t have to sit through any surprise Usher concerts.

When you spend time working in the video game industry, you meet all sorts of interesting and colorful people. PR reps that have helped you out time and again. Peers that have chatted you up on social media. Celebrities that love the industry and of course Youtubers. At any given time, a decently connected person in the industry can stand on the floor and do a full 360 and will spot at least one person they probably know the name of. I’ve met people like Jim Sterling or Adam Sessler, who are staples of the industry.

The networking that is done at E3 absolutely helps open doors for others in the industry and helps humanize the people that most members of the industry have exchanges with on a daily basis. It’s also a great place to tell a content thief that he sucks and his belt looks stupid. The best stories from E3 are told with others in your party.

E3 is one of the most stressful times of the year in games media. Booking appointments, making appointments, dealing with the eventual issues that go along with the limited battery life of personal electronics and keeping up with notes is more than enough to drive you mad. Even better, imagine the fun of rushing to an appointment only to realize that they are running 10 minutes late, pushing all your other appointments back as well. That isn’t even considering that you have to actually get this stuff online too! Almost every night of the show, I passed out well before my normal bed time. A lot of the booths may give you something to inspire you to talk about them outside of the show. These may be t-shirts, knickknacks, stickers and all sorts of other stuff. However, these items aren’t anything of value and the only things I’ve ever gotten that I could potentially sell to the highest bidder was the Skylanders things they give away and my Geralt statue. My first E3, someone stole my E3 Spyro. It ain’t that important to me.

There are a ton of people at E3. If you want to walk in to E3 and look around in the lobbies, you can walk right into the LA Convention Center. People can suck sometimes though and eventually there’s someone that will try to take advantage of a crowded situation. I’ve seen people that have had phones and laptops snatched when they aren’t looking. It’s a very distracting place.

E3 is the dream event to end up at for many aspiring game journalists. I’d be lying if I said that the first time at the show didn’t make me want to shed tears of joy. It’s an exciting time and always a blast!

I’ll be there this year again, I’m looking forward to some of the awesome stuff that will be going on there, like half consoles and virtual reality! I’ll keep you all informed on all the badass stuff there!