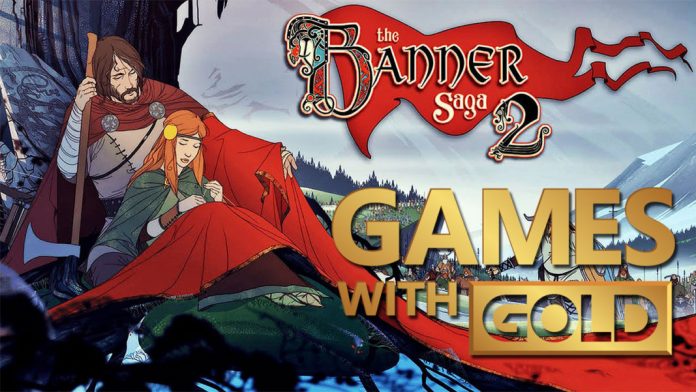 From now until June 30th  XCOM: Enemy Unknown for Xbox 360 and Goat Simulator for Xbox One, are still on offer to download for free, and The Crew will be available to all Xbox Live Gold members Until July 15th on Xbox One as part of the Xbox Live Gold service.

The July Games with Gold have now been revealed and listed below for you:

The Banner Saga 2 is free for Xbox Live Gold Members the entire month of July.

Tumblestone will then be made available beginning on July 16th through to August 15th.

After the events of the first game, the decisions made in the previous chapter of this trilogy will affect the course of history. The second part will include new characters, a new race, but also a significant improvement in the entire system of combat and strategy with the permanent loss of those who fall in battle.

Combining RPG and tactical turn-based combat, The Banner Saga takes us back to the time of the Vikings where your strategic choices directly affect their personal journey. Carefully choose to help fight a new threat that endangers an entire civilization. Every decision you make in travel, conversations and combat has a significant effect on the development of the game. Not everyone will survive, but will be remembered.

“Tumblestone is the first game of puzzles and action of the last fifteen years, being the game that will reinvent the genre and deep brain puzzle,” according to developer The Quantum Astrophysicists Guild. “Stepping out of the formula match-3 games like Bejeweld, Tumblestone departs from the random gems and raises the bar with unique puzzles full of multiplayer challenges, as demonstrated games like Tetris Attack and Dr. Mario at the time,” via the company’s press release.

Tumblestone offers several game modes for both single player and competitive multiplayer and up to four players via Xbox Live or locally. A 40-hour campaign with twelve worlds, each with a unique twist on the main mechanics.

Starting on July 1 though July 15 Rainbow Six: Vegas 2 will be available to download.

Then on July 16th TRON Evolution makes it’s way onto the service and will be available for free until July31st.

Rainbow Six Vegas 2 takes place before, during and after the events of Rainbow Six Vegas. It is possible to see links between the two stories, but the story line of this second installment can be understood relatively well without having played the first game of this series.

Unlike the first game, the character progression system is much more persistent and is present in both the campaign and multiplayer. You can also choose to play the campaign cooperatively with a friend via split screen or on Xbox Live.

Tron: Evolution is a third-person action game with RPG elements and built races. The game features single player and multiplayer modes with gameplay basically focusing on acrobatics and combat. Player movements are strongly influenced by parkour, while the battle inspired by the capoeira (Brazilian martial arts). Tron: Evolution also features light motorcycle racing where each bike leaves a trail of light that can destroy or “Derez” any enemy.