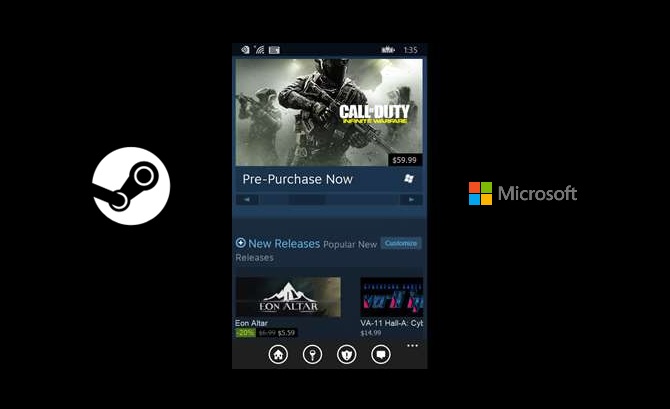 Steamy news Real Gamers, it’s full steam ahead for the official Steam App which has finally been released for “mobile Windows devices” and I can only assume it’s been welcomed by Windows Phone and tablet users who would have been steamed to not have the app before now.

So the next time you’re on your Windows Phone and you want to blow off some steam, you can open up your official Steam App and browse the great deals they have to offer. I mean it’s not hard or anything, it’s not like they’ve employed a steam engine to crack a nut or anything.

Anyway I’m not going to steam your beam any longer, here is a list of what you will be able to do on the Steam App for windows mobile devices:

Well I’m going to end this article before I run out of steam, but before I do, let us know if you’ve got a Windows Mobile device if you’re glad they’ve finally released an official Steam App or if you’re a Steam App user on Apple or Android if you can vouch for its usefulness? Whatever you want to say, even if you just want to let off some steam, do it here in the comments or in the RGM Forums.