With the game now in Closed Alpha, some players with access to the build have allegedly datamined the files, revealing significant details about the game’s campaign, multiplayer, and more. If true, Battlefield 1 looks like it will live up to expectations.

On Reddit, users “Lobix300,” “Spitart14,” and the creatively named “SorryEADICE,” posted information found in the game’s files. Here are all the new details revealed about Battlefield 1’s campaign and the implications from a historical perspective. I am not a participant in the game’s alpha, and a big thanks to JackFrags for allowing me to use his footage.

Obviously, spoilers will follow. The information gleaned from the alpha may be inaccurate and may also not reflect the final game. Leaked multiplayer details will be covered in a future article. 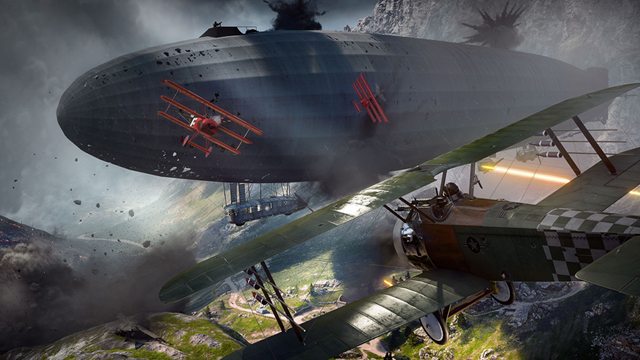 According to the information in the game’s data, the Battlefield 1 single-player campaign will have six episodes, most with several chapters. Players will play as several different characters in Battlefield 1, and the new campaign information is telling, because it points to the World War I campaigns in which players will participate.

Each chapter appears self-contained, so there will likely be one protagonist per episode, rather than a confusing storyline following several different characters at once.

Episode 0: is the game’s Prologue.

The prologue likely sets the stage for World War I, and may possibly include major political events leading to the outbreak of war, such as the circumstances surrounding the assassination of Austrian Archduke Franz Ferdinand.

Episode 1 likely takes place in the skies above the battlefields in World War I. This is inferred not only by the “Flight School” chapter, but “Blitz,” which is a reference to German bombing raids over London by Bombers and Zeppelins. One of Battlefield 1’s preorder’s surrounds The Red Baron, Manfred von Richthofen, so it stands to reason if we are to meet this historical character, it will be in the first episode.

This episode is likely set in the Middle East. This is inferred, not only from the last chapter’s title, but from the Episode’s name itself. “Nothing is Written” references a famous quote by Lawrence of Arabia, prior to the attack on Aqaba.

This chapter probably follows the female Bedouin soldier we saw in the game’s trailer, which has since been confirmed as one of the game’s playable characters. The chapter title “Hidden in Plain Sight” may mean this part of Battlefield 1 is centered around espionage, which played a major role in the conflict, and would be perfectly suited to the female character.

Two leaked multiplayer map names point to battles we’ll probably see in this episode: The Fao Landing in 1914, when British Indian soldiers landed and took the Fao fort from the Ottoman Empire. This is probably depicted in the game’s concept art, as well. The other battle is the Raid on the Suez Canal which occurred in 1915, when German and Ottoman troops attempted to take the canal from the British.

This episode likely follows “Edwards,” the tanker we’ve seen in the Battlefield 1 trailers. Probably set on the Western front, tanks were first used en masse at the Battle of the Somme in 1916. “Fog of War” could be referencing the use of chemical warfare agents like mustard or chlorine gas.

The last chapter, “Steel on Steel” probably references the Battle of Lys in 1918, which took place near Amiens, which is a confirmed multiplayer map name. This battle marked the first tank versus tank battle in history. Additionally, leaked bits of script name some of the characters in this episode (Pritchard, McManus, Finch, Townsend, and Edwards).

There aren’t any details on this episode, though the title infers it takes place in Italy. One of Battlefield 1‘s multiplayer maps, “Monte Grappa,” is probably set during the Battle of Vittorio Veneto in 1918, so there’s a good chance the episode will feature the battle. The battle was the turning point for the Italian army, which suffered several defeats attempting to stop an Austro-Hungarian invasion.

It’s also likely this chapter features naval battles from the Adriatic Campaign, since we’ve seen clues to this in the game’s concept art, and one of the multiplayer maps, “Empire’s Edge,” is confirmed to include dreadnought battleships.

Again, there aren’t many details for this episode. Runners were used during WWI to deliver messages between the front and headquarters, but that offers little information.

However, we’ve yet to see any episode featuring the Harlem Hellfighters, which are touted by Battlefield 1’s box art, collector’s edition, and preorder bonuses, so I’d wager we’ll see them here. This episode is probably set during the Second Battle of the Marne, or the Meuse-Argonne offensive, both set in 1918.

The Harlem Hellfighters took part in both battles, but had a more significant impact in the latter. The Meuse-Argonne is also mentioned as a multiplayer map, giving more credence to this theory. The inclusion of the Argonne also means we may see the infamous “Lost Battalion” which were encircled in the battle.

Episode 6 appears to be set in the Mediterranean, based on the inclusion of Gallipoli. The campaign in the Dardanelles is regarded as one of the more futile efforts of the war, but a defining moment for the Australian and New Zealand Army Corp, or “ANZACs.”

The last chapter’s title “Saving a Life” has raised quite a few theories online. Some point to the alleged encounter between British soldier Henry Tandey and a young, wounded German soldier named Adolf Hitler. It is said Tandey raised his weapon but did not fire. The story is likely a myth, but would be an interesting end to Battlefield 1, and thus directly set up a sequel in World War II.

Personally, I believe the title might reference the story of an Ottoman soldier carrying a wounded Australian back to ANZAC lines so he wouldn’t die in no man’s land. There is a statue depicting the story in Turkey at the Gallipoli Peninsula Historical National Park. It fits the episode’s theme perfectly. The story, while likely fiction, would bring a fitting end to Battlefield 1, by showcasing humanity had somehow survived unmitigated mechanized slaughter.

Again, all of this is speculation, and it’s predicated on information datamined from the alpha, which may not reflect the final work that will be Battlefield 1.

I’ve said before that DICE and EA had to pick and choose battles and participants, otherwise the game would never be completed. If this data is accurate, I feel they made fine choices, and left plenty of room for a sequel in some of the unexplored theaters of war, like Russia, North Africa, and Serbia.

What do you think of the way Battlefield 1’s campaign is shaping up? Tell us in the comments!