I have been looking forward to playing Shadow Warrior 2 for ages and when I got the chance to play it and take everything in, I had to jump at it. Believe me when I say I took it all in, I took Wang in deep and I took it good. For those of you who think you’ve stumbled into some kind of homo-erotic website about recent fornication, then let me explain – Lo Wang is the lead character in Shadow Warrior 2 and you can’t help but let his personality bleed into you a little, especially when you’ve been binge playing the game! 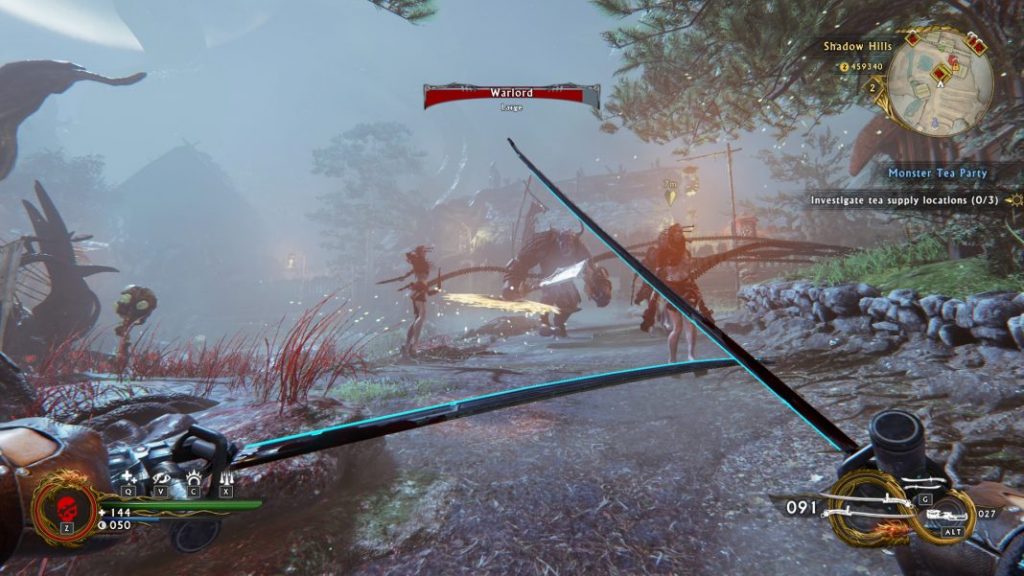 First and foremost I’ll go into the graphics of the game, Shadow Warrior 2’s graphics are good but not up there with some of the more intensive games of 2016 – your Battlefield 1’s and Gears of War 4’s – however that doesn’t mean to say that it is an ugly game. Really Shadow Warrior 2 is one of the more stunning game’s I’ve played in the past couple of years. With environments ranging from the Japanese countryside with picturesque villages and small towns to a neo-noir style futuristic city – with enemies to face in both arenas fitting to the locales – in a way. The more rural setting playing host to a number of demonic beasts and monsters, while the city has more futuristic style enemies such as robots, flying drones and Cyborg Ninja style sword-and-gunmen. 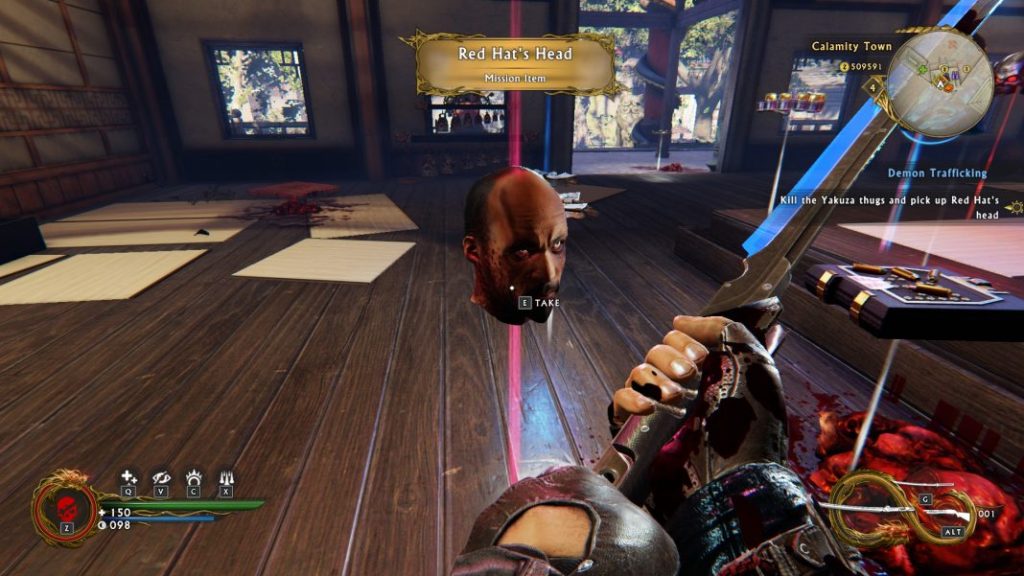 The way the game looks is fantastic, from the way Wang handles his weapons, to the ways in which the bodies of your enemies get diced up, from blowing holes out of the bigger monsters to slicing the limbs or other body parts from the smaller enemies – always to the sound of a pun from Lo Wang along the lines of “Pull yourself together” or “You dropped something, I think it was your dignity.” Sometimes when there are a lot of enemies surrounding you, the graphics can go for a walk because it’s nothing but a mass of blurs as you wildly try to fight your way through – but this is no bad thing, it just exemplifies the carnage that you are a part of. 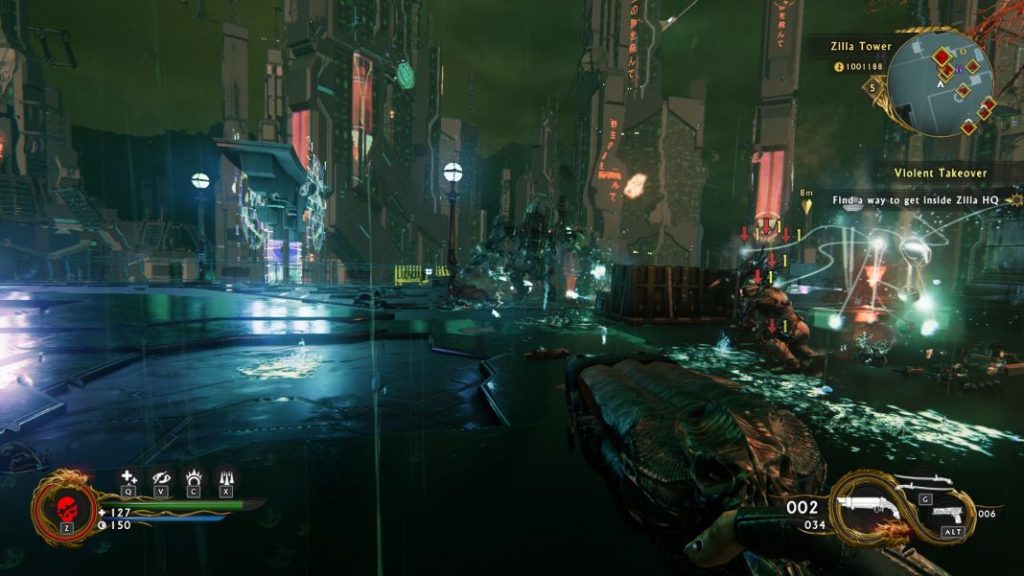 In among all of that carnage is an absolute sea of drops from your fallen foes, sometimes almost literally – especially when you are in boss battles. The sheer volume of drops can sometimes be a little overwhelming, especially when it comes to the upgrades you can get for your armor and weapons for example. It got to the point in the game for me that I had so many upgrades to choose from I just stuck with whatever I had from about a quarter of the way through the game as otherwise I would have spent as much time upgrading things as I was actually playing the game. In this respect, I would definitely say that less is more – what do I mean by that? Well to be honest if upgrades weren’t dished out like candy on Halloween then they would be seen as more valuable, and you would feel like it’s worth taking the time out to upgrade yourself accordingly. 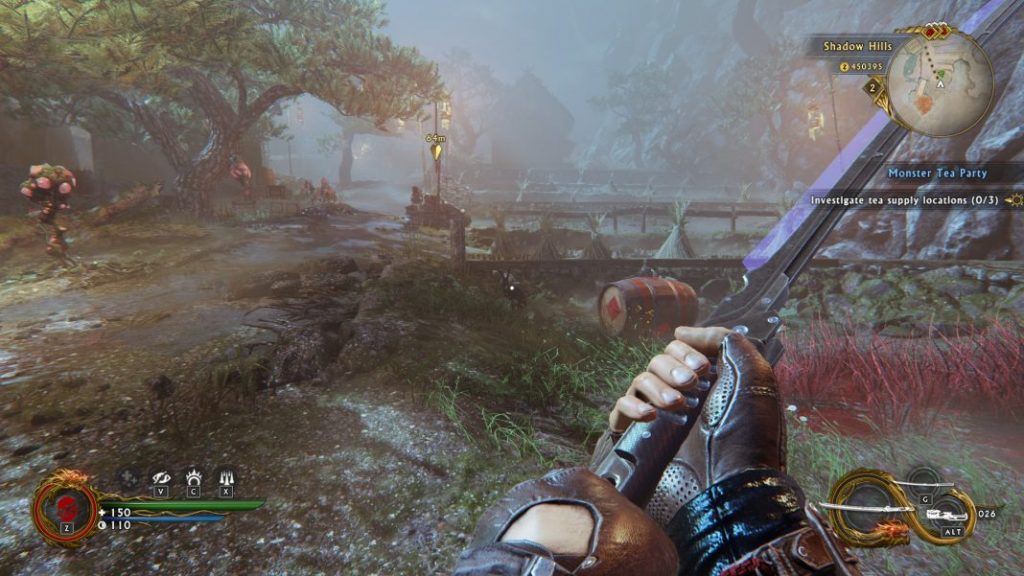 There is a multiplayer co-op in the game, however every time I tried to play this, there were never any games to join. At first I thought that the multiplayer would be for some epic Doom style battles, however it’s a way of playing through the game with friends, but being in the position that I have no friends…that own this game that also live in the same time-zone I unfortunately won’t be reviewing this aspect. However from playing the entire campaign to 100% completion, I can only say that the experience would undoubtedly be enhanced by teaming up with some buddies – up to four Wang’s getting their swords into the fleshier enemies would be a great thing to experience. 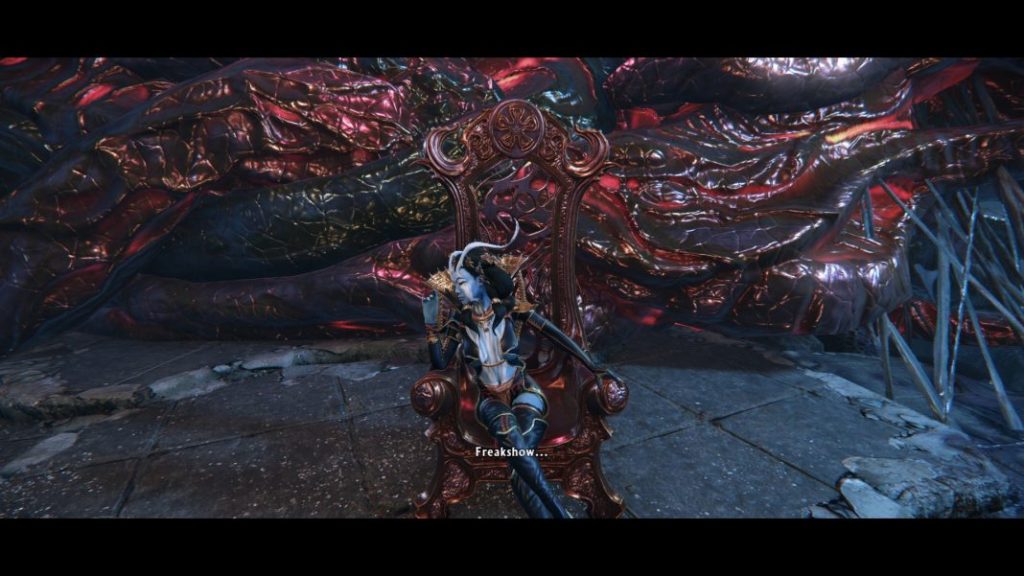 The music within the game is very well done, from the Far Eastern chimes and little ditties in the game to the epic 80’s style soundtrack including an original song “Warrior” by Stan Bush during the final boss battle really pumping you up during the harder parts of the game. The narrative in the game is pretty well done as well, a lot better than I thought it would be and this is exemplified by the ways in which Lo Wang would make me laugh out loud by saying things like “Boom goes the Boomstick!” and “Chop! Chop! Motherfuckers!” to “Mess with the bull, you get the Wang” which – I’ll be honest – can start to get slightly tiresome towards the end of the game, but Lo Wang’s interactions during cutscenes with other characters are always worth watching without the want or need to skip. 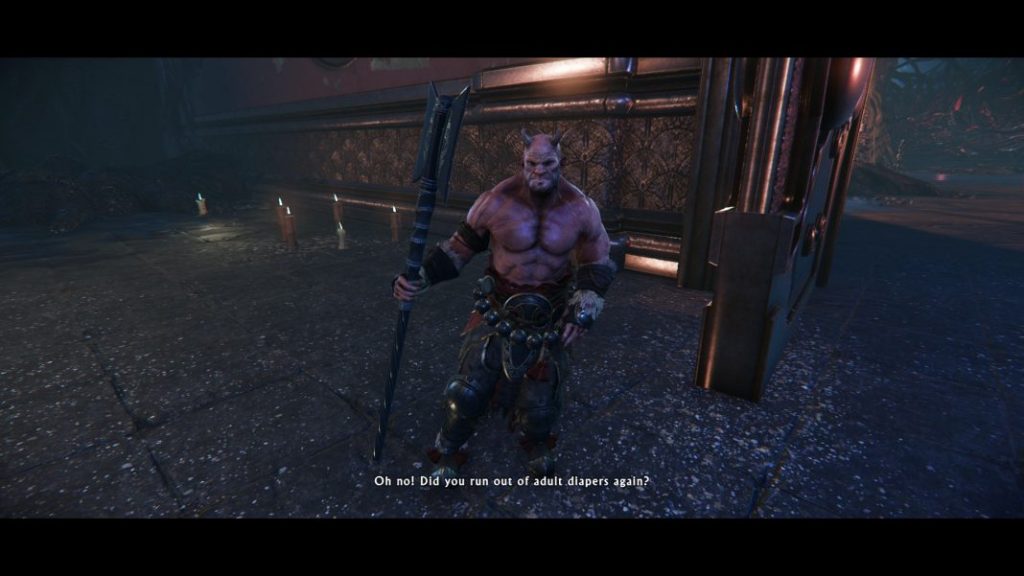 The story-line in the game is a fairly simple one to follow, set 5 years after the events of the first game, Shadow Warrior 2 has a rather strange narrative, involving having another person’s (Kamiko’s) soul put inside your head, so every now and then you have an impromptu bit of dialogue with her as you discover more and more about her origins, the demons in the world and the evil Zilla Corporation which dominates the city. I won’t spoil any more of the story beyond that bit of soul entwining, however just know that you’re not just slicing and dicing and blasting and exploding monsters and cyborgs for no reason, even if Wang’s character wouldn’t need a reason to wage a bit of a personal war on anything he saw like that! 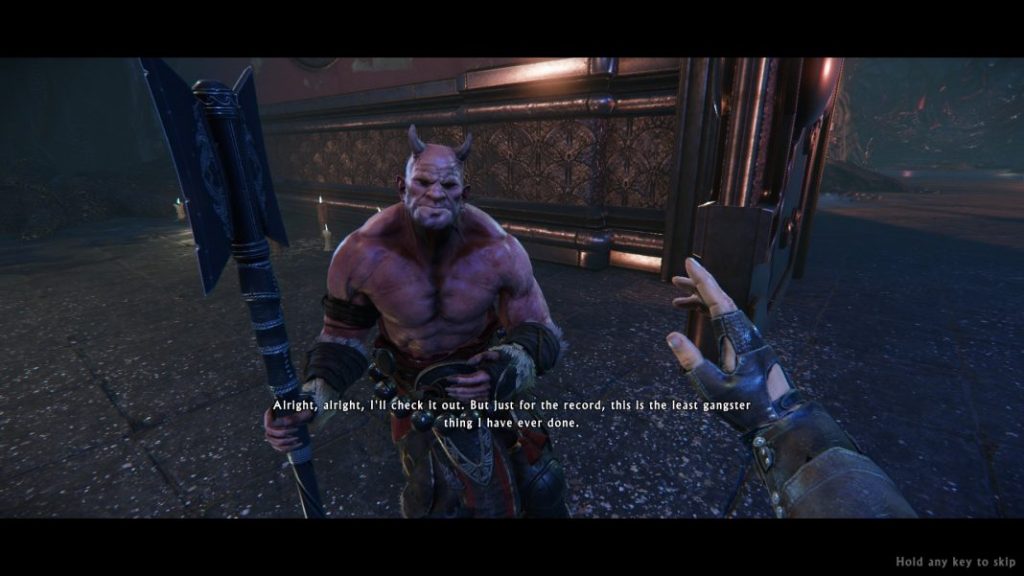 There are a multitude of side-missions as well in the game which can reward you with various upgrades and weapons as well as skill points to develop Wang into an even more deadly and efficient killing machine. From finding tea (yes, tea – hence the dialogue in the image above) for an immortal demon to a set of side missions titled “Heisenberg” where you are required to make drugs for a pair of cyborg assassins.

The way the game chops and changes from the rural to the urban setting as well as the more demonic hell-like areas, the atmosphere of the game is ever-changing, but the entire essence of the game never waivers. You will feel like you’re playing two different FPS games in one due to the way in which you have to really change your style of play depending on the areas you are in and the types of enemies you have to face off against. 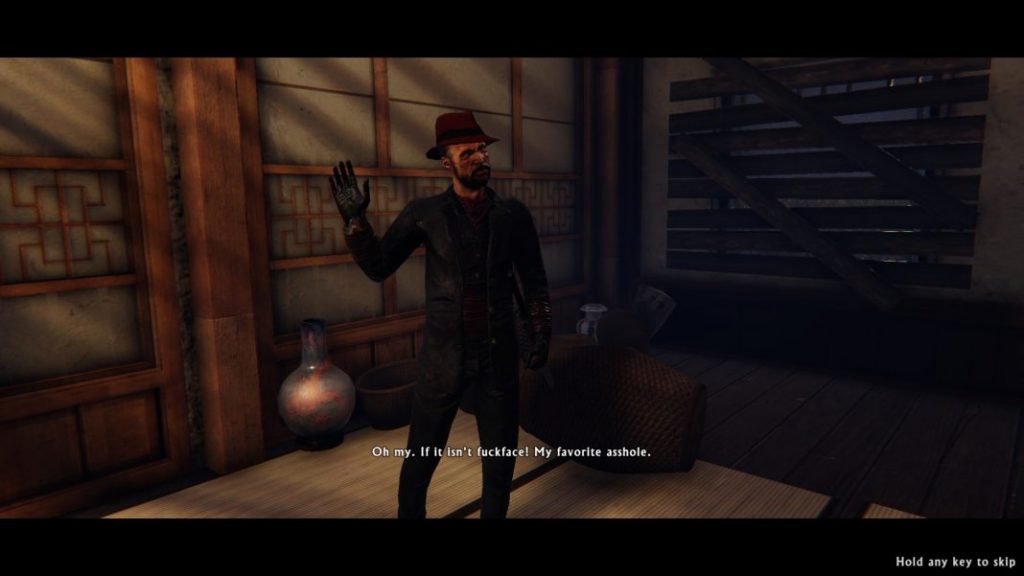 This is where the game becomes more than your normal FPS, you really have to think hard about your arsenal and how you will go about each battle as the different types of enemy you’ll face have different strengths and weaknesses and you’ll want to exploit them to stop Wang from drooping. This also goes for your upgrades, many middle-tier bosses will have certain immunities, so if your shotgun has added fire damage and the enemies you’re facing off against are immune to fire…well you don’t need to be a rocket scientist to work the rest of that out. The game has elements of procedural generation, but I must say that a lot of the levels were pretty much identical (fair play, some of the missions take you back to previous areas) but I didn’t find this as prominent as I thought I would. However, I’m sure this will stick out a lot more when I play through it again!

I do though have a word of warning – rabbits. They’ll appear as little green arrows on your mini-map and you could be forgiven for thinking that they are just added for a bit of a laugh, but be warned I was bitten a good couple of times by rabbits – if one should happen to get caught in the cross-fire or just be unlucky enough to be killed in an errant explosion you could be faced with one of the more rabbid and fierce opponents in the game: Bunny Lord. No joke, just check out the picture of it that I managed to take – that is about as far away as they stay from you. You can try to leap out-of-the-way but it’ll keep coming at you. 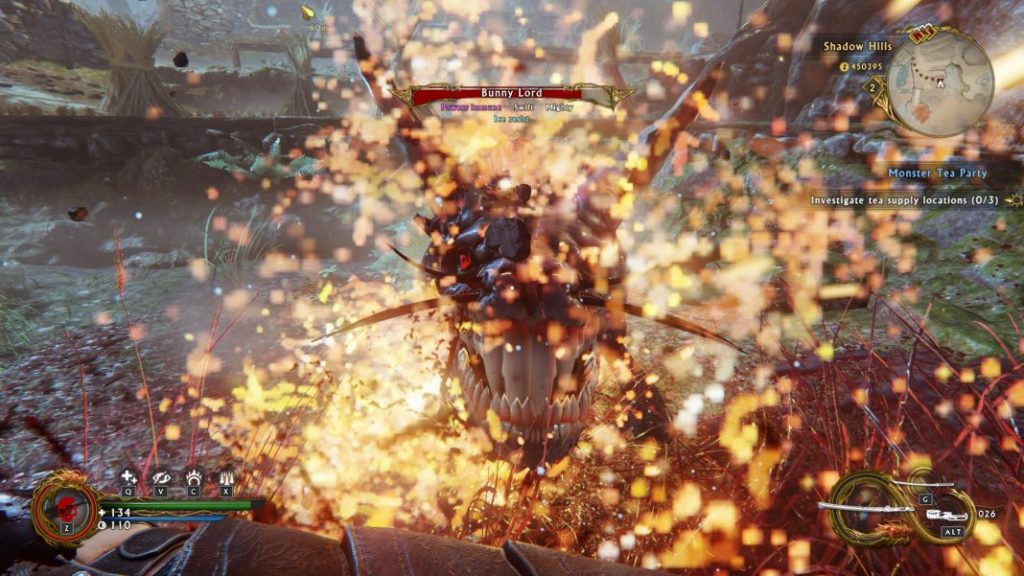 Shadow Warrior 2 is definitely a game that pulls you back in and I’ve figured that the best way to look at it is to think of what would happen if Doom (2016) and Postal 2 had a baby. It has that sometimes horrific looking and almost identical gameplay style as Doom, (the constant need to stay on the move another glorious return to run-and-gun) as well as the visceral look and sometimes dark humor of Postal 2.  Lo Wang is back in a magnificently triumphant return and I really do hope beyond hope that eyes are already looking to the future and the possibility of a third installment in the Shadow Warrior games.

Have you played with Wang? Are you impressed with the efforts of Flying Wild Hog’s development of this? Let us know in the comments below, the RGM Forums or on Twitter. If you like what you’ve read then feel free to share this article on Facebook, Twitter, Google+, Pintrest or Reddit using the buttons available!