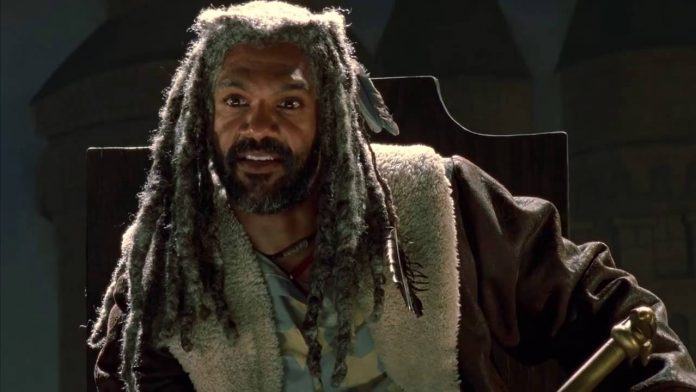 The Walking Dead Season 7 is now in full swing and last week I made a prediction that this second episode would be as action packed and tense as the first but alas that wasn’t to be. The action this week took us away from Alexandria and The Saviors, it took us away from the horrors inflicted on Glenn and Abraham and the sadistic methods of Negan. This week we went to The Kingom and we followed up on where we had left Carol and Morgan after their own run in with the Saviors which saw Carol seriously wounded and clinging to life.

The episode started with Carol being pulled along by a horse and cart with Morgan and some unnamed…”subjects”? I suppose that would be the right term for those who dwell within a kingdom…

More to the point, we saw Carol slipping in an out of consciousness until she was unceremoniously tossed from the cart she was laying on due to a walker attack. As she was coming to, she saw Morgan fighting off walkers and her horse being eaten alive – horses really don’t seem to have much luck in this post-apocalyptic world do they? Carol then started having weird visions of the walkers as people and with every one that was killed she envisioned them as a real person – I had hoped more would come of this, but for whatever reason it didn’t. It would have been quite interesting to have seen this woman who started off so meek and mild in the early seasons who then became something of a monster herself as time went by, hardened by the death of her daughter and the situation she found herself in, only to have that edge that she developed ripped away from her. Fortunately for her and for us watching faithful, she would remain the same old Carol.

Carol and Morgan would find themselves rescued by further subjects of The Kingdom – even if we wouldn’t exactly know that that’s where they were from yet – and taken to safety. Then would come the inevitable introduction of by far and away the most comic-booky character within the entire Walking Dead universe – Ezekiel. Oh, I’m sorry – King Ezekiel.

Morgan wheeled Carol in for an audience with His Royal Highness and his pet tiger – Shiva. Yes, his pet tiger – like I say, very comic-booky. The way in which he was presented in the episode not only to Carol but to viewers new to the phenomenon that is Ezekiel was eccentric to say the least and very true to the comics. He spoke like a dramatic king of old, speaking very much as though his words carried a royal prerogative that those in his audience should be grateful to bear witness to.

Carol had no choice in her own mind but to smile along and look the part of a woman in awe, nodding and even referring to him as “Your Majesty” – only to question everything she just saw with Morgan afterwards, referring to everything about The Kingdom including its ruler as “a circus”, showing that her distinct edge was very much still there. I had wondered if the hallucinations that she had experienced at the start of the episode would lead more into her thinking that she was losing her mind and she hadn’t really witnessed this man acting as a king with a pet tiger, I know that I certainly would be thinking that I had taken one too many to the noggin.

Afterwards we see Ezekiel, Morgan and a little group outside The Kingdom, herding pigs towards a tied up walker – which they merrily noshed on, initially leading to some confusion as to why they would round up perfectly good piggies only to let them feast on rotten flesh – but the reason as to why they would want the pigs “full of rot” would be revealed later.

After the initial herding took place, a small group of walkers approached with the youngest in the group, Benjamin, being instructed by one of the others, Richard (great name by the way), to use his machete to kill it, only for him to fail hard by striking the shoulder and being in some difficulty. Ezekiel unsheathes his sword – which can really only be described as a “pimp sword” – and puts the walker down. Morgan is then instructed to keep the pig herding a secret from the rest of The Kingdom. Color me intrigued…

Back at The Kingdom, Ezekiel asks if Morgan could train young Benjamin in the arts of using his staff as other attempts to train him with blades and guns had been fruitless – Morgan agrees, which then leads to what can only really be described as something resembling an 80’s training montage of Morgan teaching Benjamin within a gazebo how to wield the staff, whilst Carol goes around The Kingdom, acquiring a knife, clothes and even chocolate all the while appearing to be the soft, gentle woman she is so good at portraying.

After this Morgan loans Benjamin his book, “The Art of Peace”, before being summoned back out with Ezekiel and his troupe along with being told to bring a gun.

We return to the outskirts of the city where we see the pigs are now dead and skinned whilst being hung up in the back of a truck, as Ezekiel and the others are waiting in a parking lot. This is when we find out the pigs were being used for a trade with The Saviors, as a group of them arrive with their leader, Gavin. It would certainly seem that The Saviors reach is a lot larger and longer than we first would have thought and at least now we know why they were so keen to get the pigs “full of rot”.

A little fracas occurs between Richard and one of the Saviors after some goading, with the 2 men in a fight to which Ezekiel orders Richard to stop, that that wasn’t how they did things, giving the unnamed Savior a couple of free shots at Richard before being called off by Gavin. The Saviors left with the strict instruction that if there was anything less than delivered the following week on their agreement, that Richard would be the first to go.

Morgan is then seen eating in The Kingdom cafeteria with Benjamin with Benjamin explaining that Ezekiel doesn’t want the general populous to know about the deal with The Saviors as they would want to fight back – something Ezekiel insists would lead to too many deaths in a fight they would not win. Morgan then explains that an inscription in the book he had loaned to Benjamin which inferred that he was against killing was not his, insisting as well that “Sometimes we change our minds”.

After this Morgan finds that Carol has gone, which we then go to immediately with Carol sneaking around stealing fruit from The Kingdom garden, only to be discovered by Ezekiel who sits with her and opens up. She describes him as a joke and this seems to unlock something within him, as he lets his guard down and talks a lot more normally and honestly about the act that he puts on. That he spun a heroic tale about taming Shiva and making her his pet, but the reality was that he nursed her back to health when he was a zookeeper. That he puts the act on because people need someone to follow and that his had played many kings in his time in community theater and took his lead from those experiences.

Ezekiel ends his chat with Carol suggesting that she could “go and not go” being as enigmatic as possible in a way that only he could really pull off. Carol all the while insisting that she just wanted to leave, harking back to the last season where she wanted to get away then as well.

The next day, we see Morgan escorting Carol to a little house that they were at when they were rescued by The Kingdom at the start of the episode, Carol entering and killing a walker residing inside, going as far as to bury her outside among other graves that were in the yard. The episode ends with Carol starting a fire in the fireplace, when a knock followed by a loud growl is heard at the door. It’s Ezekiel with Shiva and he offers her a pomegranate which makes her smile and the episode ends.

All in all, it felt a little like a filler episode and as time goes on it will feel more like one, especially as we get to know The Kingdom and Ezekiel more over the season. It was however, quite a humorous episode making me smile and chuckle a lot more than any other episode I can remember, which you could argue was needed following what could have been the bleakest episode to date last week.

Khary Payton did a good job as Ezekiel, however I cannot help but think that Dave Fennoy (the voice actor for Lee Everett from Telltale Games The Walking Dead) would have been a much better option, especially when it felt in the comics that Ezekiel was a bit bigger and older than Khary Payton, not to mention that voice! That’s not to say that Khary Payton didn’t do a great job and played the part exactly as you would expect him to be from the comics.

Melissa McBride was as good as ever playing Carol, with a potential romantic plot to follow with Ezekiel (making a change from Michonne in the comics) whilst Lennie James was his usual focused self as Morgan.

All in all this wasn’t a terrible episode, but with the events of the season opener still very much in the minds of viewers it did seem a little slow and was clearly just a scene-setting episode to bring Ezekiel and The Kingdom into the fold – and thinking of that, it did its job well. I’m already looking forward to the inevitable meeting between Rick and Ezekiel as well as the future events if the comics are anything to go by.