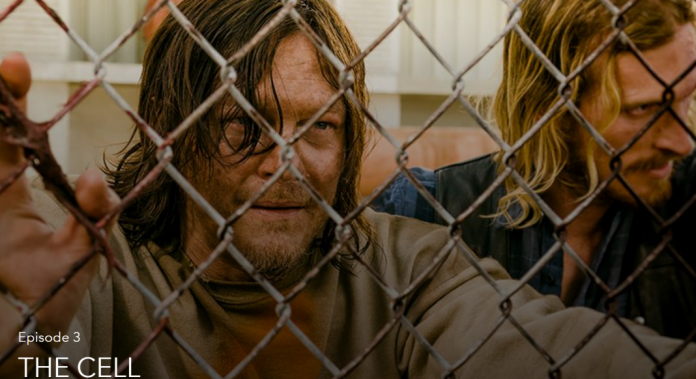 The latest episode of The Walking Dead was an exercise in torture for poor, old Daryl and believe me when I say the song that is linked just above here will probably be in your head for a few days after watching the episode. Feel free to listen to it while reading on to get a sense of Daryl’s pure musical torture. The 1 hour video above of this 1:45 song on repeat is courtesy of Scratch Youtubers.

The Cell was another scene setting episode, showing the methods in which Negan maintains control and twists his followers to his will – breaking them to the point of unreserved loyalty. Breaking people until they also identify themselves as “Negan”.

The episode basically starts by showing how Dwight lives and how people are punished. Dwight is clearly one of Negan’s favored men, being able to walk to the front of the bread line, play air-hockey and being able to ransack those who were punished’s personal effects. Speaking of those that are punished, there was a ginger guy who got into an argument, got violent but ultimately got beat down by other Saviors…and more.

After Dwight had his fill of the guys personal effects – taking for himself some mustard and pickles – taking a couple of eggs and a head of lettuce just for him, he made himself a mean looking egg salad sandwich, and decided to eat the thing outside. Fair enough I suppose, it looked like a nice day – however he did also get the pleasure of seeing the former owner of his mustard and pickles chained to the exterior fence as yet another walker deterrent.

I liked this intro, it showed the gulf in differences between the way Negan’s favored men are treated to those who break the rules. This would become clearer and clearer throughout the episode, making it clear that there is a 3 tier system for new arrivals to the Saviors:

This all seems simple enough, but when it comes to people of principle – which Daryl definitely is – the third option isn’t really an option at all.

Throughout the episode, the focus isn’t actually on Daryl as much as you think it might be, the focus is on Dwight. You may well remember Dwight, his wife and sister-in-law from Season 6 – they were the trio who Daryl encountered in the woods who turned out to be getting hunted by Negan – the further story of that being fleshed out in this episode. Dwight comes across as a beaten man, but perhaps not entirely beaten. He tries to talk Daryl round into taking the easy option and joining them, however Daryl’s stubborn refusal to be anyone else’s pawn doesn’t wane, even with the repetitive nature of the song Easy Street being played contstantly (by the way if you still have that song on – well done!)

Dwight isn’t the only one to try and convince Daryl to succumb, Sherry – who we find out is now Dwights ex-wife now that she is married to Negan – also tries to convince him to take the easier options as it will all only get harder for him as he goes on. Dwight and Sherry still appear to be very much connected, even if to everyone else she is now Negan’s wife and no longer Dwight’s beau. The feeling there is that they chose to survive as opposed to any other option they had – “It’s a hell of a lot better than being dead.” Dwight tells her during a private moment between the two.

Still, even though the focus is on Dwight really, showing that although he is publicly loyal to Negan, privately he may not be quite the loyal henchman that he appears. Even when he goes to retrieve a worker who escaped who during their exchange far from the Saviors compound where it is clear that Dwight is not as loyal as he seems, instead of doing what he was told and bringing him back alive, he opts to shoot him – releasing him from the hell that he was in, that he was not a free man under Negan and that there was nothing for him anymore. The key exchange in it all was that the escapee was questioning why everyone falls into submission to Negan, that there is only one of him and many of them, that if they wanted they could overthrow Negan and be free of his rule. This was clearly the turning point for Dwight, helping him secure his place as a potential Quisling to Negan.

Despite the internal battle being raged in Dwight’s psyche, Daryl is who we were actually interested in. After being clearly tested, by having his cell left open and trying to escape – resulting in a beating from the Saviors and a little speech from Negan, and being forced to eat nothing but dog food sandwiches, Daryl’s resolve never seems to break; until a Polaroid of Glenn’s dead body is put in his cell, while Crying by Roy Orbison played seeming to break Daryl as he started to cry himself, knowing that his actions caused Glenn’s untimely death. During this, Dwight listens in and is clearly a man not at peace with what he is doing.

Towards the end, Daryl is taken to see Negan by Dwight who asks him who he is – expecting the answer to be “Negan” like all of his other followers. Daryl resolutely states that his name is “Daryl”, even after finding out that Dwight was on the run with his wife Sherry and her sister, Tina, that they were originally workers or slaves in the camp and couldn’t get enough points to get the medicine that Tina needed for her medical condition. Negan was going to marry Tina because of how hot she was, but Dwight stole all of their meds and escaped with Sherry and Tina, which is where they met Daryl originally in Season 6. With Tina dying, Sherry was going to be killed and Dwight begged for her life. Sherry in turn offered to marry Negan so that Dwight may live and that since then, Dwight has been one of Negan’s top men.

After this, Dwight gets Daryl back to the cell and yells at him for risking his own life over this, but Daryl replies that he understands why Dwight did what he did – it was for someone else, but that that’s why he can’t do it.

The episode ends with Dwight drinking a beer and going back to the fence that he was at at the start of the episode, he see’s a new walker being chained to the fence and see’s that it is the runaway worker who he killed. Seeing that in the end, everyone ends up serving Negan.

This episode was another good scene setter, giving a lot more context to how the Saviors work and to the mentality of those within. At present it feels like everything that is happening is laying the foundations for much bigger things to happen.

This episode was fantastic and Austin Amelio put in a brilliant performance as the torn Dwight, Norman Reedus was a beaten man in this episode and it seemed very much like bread-and-butter stuff for him as Daryl and in truth the whole supporting cast did well. All in all, a very good episode and yet again, I can’t wait for the next episode.