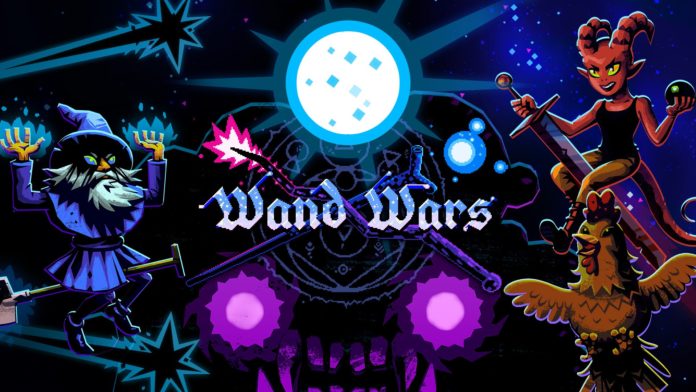 In the hearts of everyone who grew up with old-school multiplayer games throughout their childhoods will be a love for any chance to return to simple, entertaining couch co-op experiences with friends. With Xbox One Wars, I believe developer Moonradish has a gaming experience that offers simple (in a good way) gameplay modes that’ll keep players engaged and progressing for hours on end (with the right group). Mix that in with multiple mini-campaigns that not only add charm, but act as worthy tutorials for the fast-paced, highly-strategic multiplayer, and you’ve got an entertaining (and worthwhile) gameplay experience.

This game, like many others, goes for a retro aesthetic with every aspect of the game’s visuals and character models. This design choice works to great effect here, thanks to a vibrant color scheme, unique character design, and colorful presentation. Once the game loads up and you’re dropped into the main title screen, the atmosphere is established and the transition to gameplay is seamless and natural.

The varying color scheme allows each stage to feel distinct, although the map layouts differ greatly by both design and background animations. The character models stand out due to a healthy amount of different character types (ranging from a robot wanting to be a wizard to wand-waving chickens), allowing for the game’s personality and charm to show itself in a big way every chance it gets.

In terms of negatives, there are some instances where certain textures or parts of the models lack detail and it IS noticeable, but by no means immersion-breaking or too distracting. 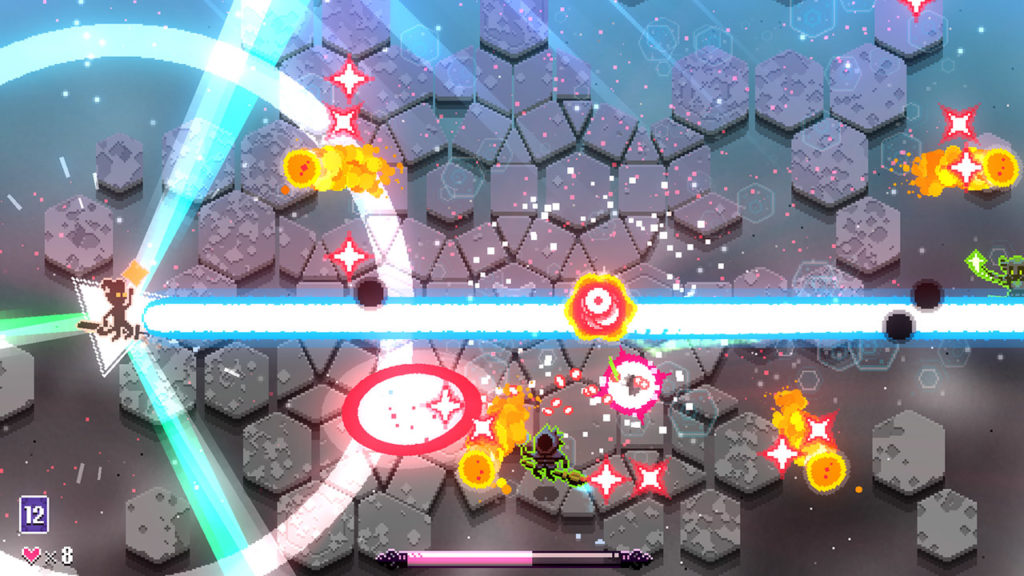 In terms of how the gameplay is, imagine that it’s a 2D version of the reflection mini-game from the Ganondorf fight in Ocarina of Time. It starts out slow, but the energy ball gets bigger and moves faster until you basically just avoid it and hope it hits everyone else before you. Every hit from a player makes the ball grow in size and increase speed. To add to the chaos, there are little black arrows that each player can shoot which will turn the other player into an vulnerable chicken (yes, actually).

There are also power-ups that heighten your in-game abilities, as well as certain items that’ll give you a pretty decent chance to take out your enemies (whether it be through freezing them or unleashing a massive laser beam like the picture above). These help mix up gameplay AND help you gain an edge when the match may not be going as well as you’d like.

Surprisingly, the game DOES come with a campaign as well. It comes in the form of six mini-campaigns with each one of them focusing on a different character. This is where a lot of WW‘s charm is made apparent thanks to quirky writing and character interactions between matches. This also provides an effective tutorial for first-time players (and an effective challenge for those who play on Legend difficulty).

Along with the campaign mode is the Trials mode which offers more of an endless amount of matches with increasing difficulty and enemies onscreen. WW finds a way to avoid the usual repetition that comes with this mode with its in-game card system in which players can either gain improved abilities, like faster movement or quicker charges for power hits, or they can give you certain items that’ll come into use in the next round. It’s fun, it can get pretty intense, and it’s worth a couple playthroughs.

Overall, gameplay is fun, fast, surprisingly strategic, and all too addictive. 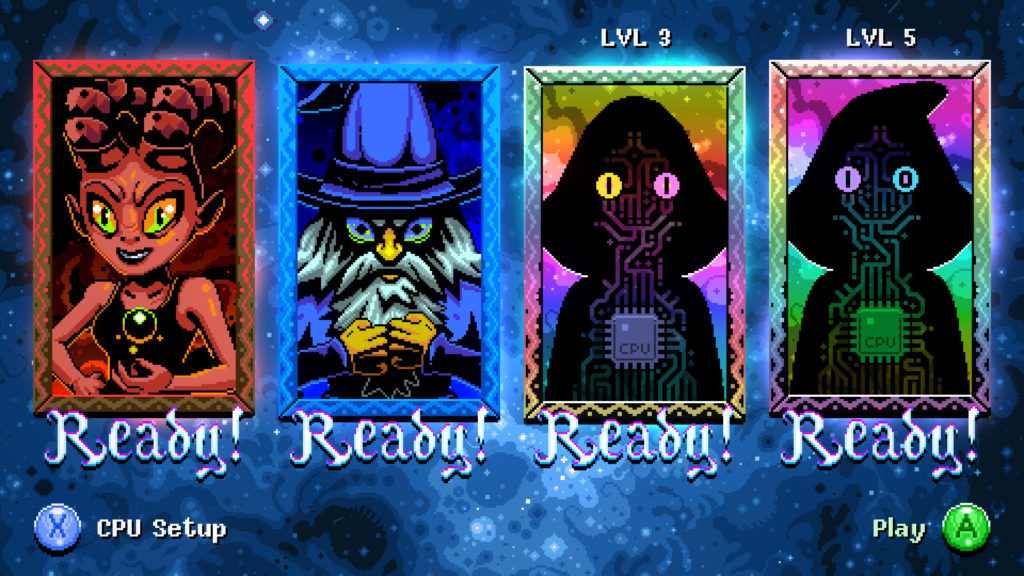 With multiplayer, this is where Wand Wars shines the brightest. The overall simplistic but fast-paced gameplay works perfectly when introducing multiple players into the mix. The game of “who can mess with who?” is truly special when including these players into the chaotic mess that is Wand Wars multiplayer. Up to four players (unfortunately, strictly couch co-op, no online) with an option for computer players and then may the best witch or wizard win.

Those previously-mentioned power-ups get particularly useful here when playing with real people as people react a bit differently from that kind of setback in comparison to the game’s A.I. It also can get particularly heated when you turn someone into a chicken, and that’s not a sentence I ever thought I’d write.

The major setback is the lack of drop-in multiplayer, but the fact that the multiplayer is just so fun once you get people together and play, you realize that the best experience is in playing with those around you. 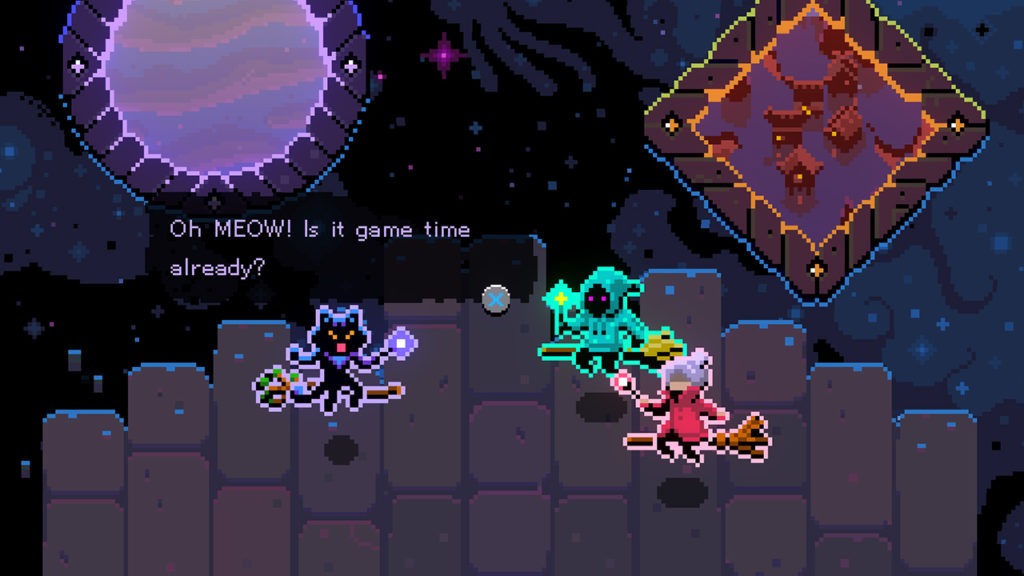 Thankfully, among all the great game modes and atmosphere comes a personality-filled soundtrack that complements the visuals quite nicely. It helps establish the game’s quirky and fun atmosphere through cheerful and energetic beats that aren’t always particularly memorable, but never fails to add some intensity and a sense of personality within each match. 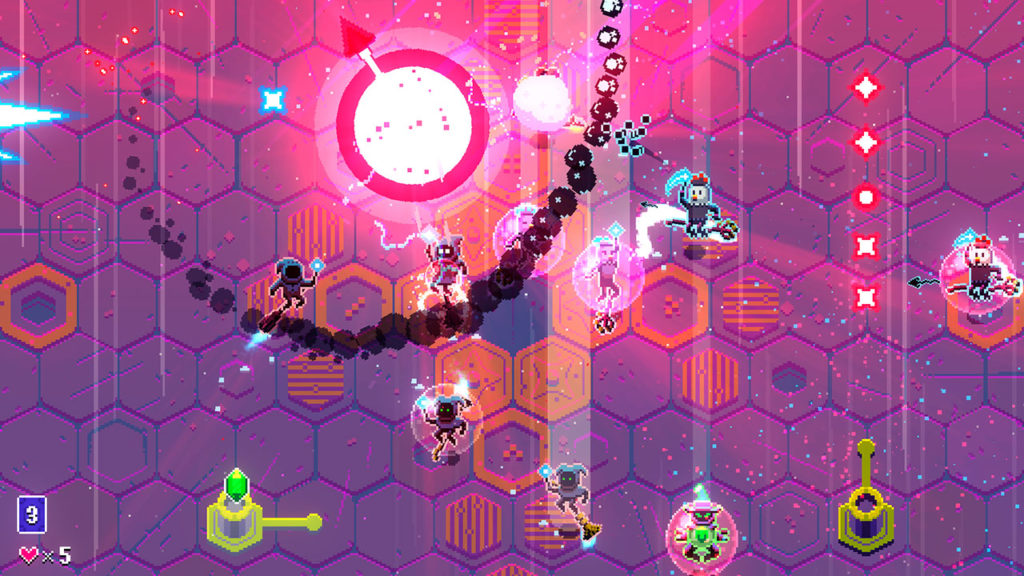 Thankfully, with great multiplayer fun like this, there is plenty of replayability available to anyone who gets that “hang on, I have to end with a win” mentality. This game almost encourages it as many losses end because of split second decisions that don’t go the loser’s way. Playing with friends will also increase the replay value as well because friends will get upset when they lose to you and will want a rematch (you will also be guilty of this, it’s natural).

Thanks to the mostly varying gameplay, the game remains engaging for many rounds at a time. Sure, the matches themselves don’t really change all that much in end goals, but the environmental hazards and fast action help keep things interesting for long play sessions with friends or by yourself.