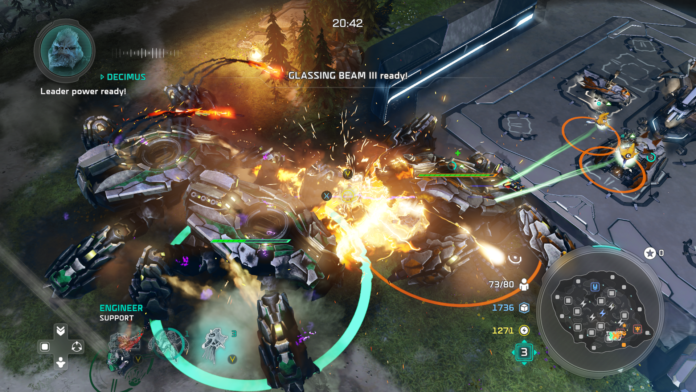 Since 2009, fans of Halo Wars have been waiting and hoping to see the next installment in the franchise brought to life. The mixture of strong lore, well structured characters, art style and the amazing cinematics that make up Halo Wars 2, has done exactly that.

From the moment the opening cinematic scenes roll across the screen you realize why fans of the Real Time Strategy (RTS) genre have been busting to get their hands on this game. Blur Studio has done an outstanding job of creating some of the most visually spectacular cinematic scenes that you will lay your eyes on.

Awakening from extended cryosleep, the crew of the UNSC ship ‘The Spirit of Fire’ find themselves in an uncharted galaxy with no means of communicating with the rest of human civilization well after the events that took place in Halo Wars.

In attempting to make further sense of where they are and how to return, a scouting team comes across the source of the conflict taking place on ‘The Ark’ and I’m sad to say, it’s not an encounter that goes well for the whole team. This is where we meet ‘The Banished’, a force of former Covenant exiles led by the terrifyingly strong and brutal Atriox.

Captain James Cutter finds himself in a tough position aboard an old ship with a crew who are grossly outnumbered by the enemy. In typical style of any great video game Captain, an inspiring speech rallies the crew together with hope and the motivation to see an end to Atriox’s reign of terror.

Before you delve into the campaign or multiplayer aspects of the game we highly recommend that you complete both tutorials. There is a third tutorial available for those who wish to check out the new game mode Blitz, however we recommend starting with the campaign. As you would expect, you will be rewarded nicely with an achievement for each tutorial that you complete. If you are a first time comer to Halo Wars or more specifically the RTS genre, this is a must for you. For the more seasoned Halo Wars fans we still recommend taking a moment to do a refresher course as there are some new additions that have been made to the way you can set up your presets and navigate around the game.

As you would expect from the sequel to the previous game, Halo Wars 2 leads you on a variety of exploration campaign missions, full of strategic scenarios which have you controlling various units in your attempt to overcome the enemy.

If you are new to RTS games you will likely find the top down view a little hard to get used to at first, with the urge to look well past your field of view (FOV) being quite strong. When transitioning from the stunning cut scenes back into gameplay a sense of restrictiveness resonates as you attempt to become comfortable once again with the camera controls. Once I had spent between 1–2 hours playing I stopped noticing this and the FOV and camera controls felt normal and sensible.

As you progress through the various missions your units will grow in strength and rank up with the more battles they partake in. This is important to note as you don’t want to be sending your soldiers to the slaughter and simply requesting more to replace them, as they will not reap the benefits of becoming a veteran. By planning your attacks well and not simply selecting all troops and sending them in hoping for the best, you can ensure that a larger percentage of your units will survive the battle and continue to rank up. 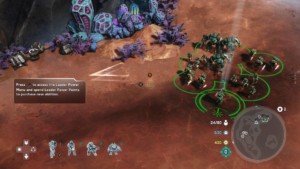 Using the support powers that you can assign to the leader can make or break the battle. Simple things like the ability to heal your unit can be crucial if you find yourself outnumbered or have perhaps not thought out your attack as well as you had hoped. This is an element of the game that should be explored to its fullest and used wisely so as not to be wasted early on and leave your units venerable as the battle unfolds.

Whilst there are only 12 missions, which is a tad undersized for a typical RTS game, the variety provided keeps you entertained and stops the missions from feeling repetitive, which many in the RTS genre tend to fall victim too. The restrictiveness surrounding base placement/management can be a bit frustrating at times, however as you play on you realize that they are placed where they are for very good reason. Too much freedom in this area would allow for you to take unfair vantage points (this is more of an issue relating to the multiplayer aspect of the game), however it would have been nice to have a bit more control over that element of the gameplay.

The extremely stunning cut-scenes and artwork really add to the entire experience, making every transition pleasurable to the eye, not forgetting the amazing soundtrack which not only does a great job of setting the right atmosphere as the story unfolds, but also adds a rather, at times, jovial aspect to triumphs and defeats when paired with the in-game dialogue.

Depending on whether you are playing Halo Wars 2 on PC or the Xbox One will determine what type of experience you have in relation to the games controls. Whilst I spent most of my time with Halo Wars 2 on the Xbox One, I did spend a couple of hours playing around with it on Windows 10 and found the controls to have some very notable differences. As you would expect the controls on the keyboard and mouse are much more complex than that of the controller.

Developer Creative Assembly have clearly put a lot of thought behind ensuring that both versions of this game have a clear and easy to use control system, however if you are new comer to RTS games there is a very large learning curve to allow for. The controls are quite extensive, even with the various short cuts that are available; this is also another reason that completing the tutorials first is very important. 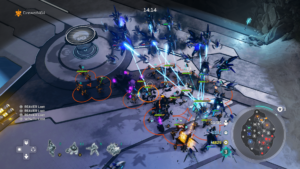 As far as some of the notable differences between the controls on the console and PC goes, the major advantage to playing on the PC is moving troops around, particularly in the heat of battle, it’s faster and simpler on the keyboard and mouse. This does have a lot to do with how familiar you are with the game though, as the more time you spend playing it muscle memory kicks in and speeds up the process on both platforms.

Moving your courser around the screen seemed a lot faster was well versus the analogue stick, however that is certainly to be expected.

A feature added to the controls on the Xbox One which, once you get the hang of it, proves to be invaluable is the ability to assign four different control groups on your D-Pad for immediate use, and additional commands that you can access by using your bumper to switch between your pre-sets. This allows for a large variety of commands to be at the ready and saves a lot of time during battle.

The campaign element of the game can almost be viewed as slightly more intensive training to get you ready to take on live opponents. It’s one thing to play against AI however, as we have all found out in sometimes a devastating fashion, it’s a completely different beast when you are playing against another person.

The intensity offered in multiplayer versus the campaign element of the game is extremely refreshing, and I found the diversity of Halo Wars 2 multiplayer offerings to be more compelling than you will often find in RTS games.

Deathmatch and Domination is where you will find the action in standard multiplayer, however a new online game mode called Blitz has also been added to the mix. I will go into that a little later.

With the option of an initial six commander characters, three on each side, you can choose from different sets of support abilities to suit the situation you find yourself in at the time. This allows for quite a bit of customization whilst at the same time allowing you to attack different terrain and types of enemies, while ensuring that you are using the most practical ‘perk’ to suit each encounter.

Using your support abilities here can mean the difference between defeat and victory. A perfectly orchestrated ODST soldier drop can make all the difference when times get tough, otherwise you can always go down a more “smash in the front door” approach and launch your Archer Missiles which will decimate anything in their path. There is a lot more diversity available in the multiplayer aspect of this game than initially meets the eye.

If you are enjoying Halo Wars 2 so far but also love you some card collecting, then Blitz is a must for you. As a new addition to the game, Blitz puts you in a different situation almost every game you play, as the chance of you getting the cards and leader you want (unless you spend a lot of money on card packs) is quite low. This encourages you to try out different strategies and really explore this game mode. 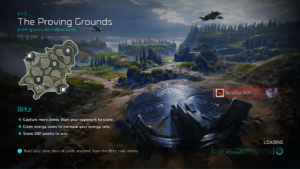 The complicated strategic approach to Halo Wars 2 is alleviated slightly in the Blitz mode, leaving more up to chance and good management of your resources.

You can play Blitz either by yourself or in co-op Firefight which basically puts you up against wave, after wave, after wave (you get the point) of enemies whose main goal is to capture two out of the three points on the map to dominate you.

Whilst not many are big fans of microtransactions, you can earn these cards packs from playing the game so purchasing them isn’t necessary. I’m quite pleased with how this card system was implemented into the game and there is certainly a lot of potential for this game mode to continue in the franchise.

Please see below for our overall score and summary as the newest member to the RTS genre.