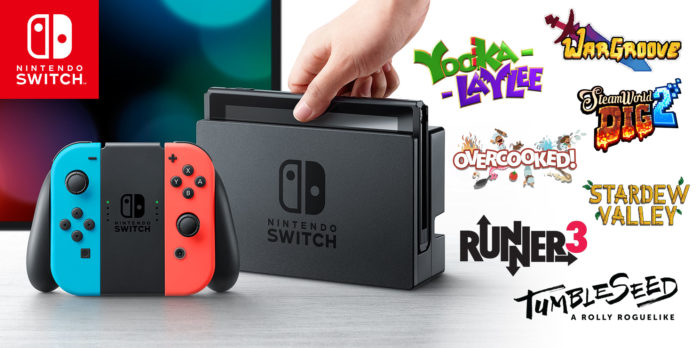 Nintendo have been promising that they will reveal more information about some of the indie titles that will be gracing the Switch soon. Now we know what indie games are coming to the eShop on the Switch in 2017. Nintendo have revealed via their new ‘Nindie Showcase’ video that some 60 titles will be available by the end of the year.

Nintendo have announced, via their UK site, that they have partnered with many developers to bring a range of different titles to the Switch. They have detailed that they will be taking advantage of the Switch’s unique gameplay features and functionalities. This includes the use of the various ‘modes’ the Switch can be in (tabletop mode, TV mode and handheld mode). They will also utilize the local multiplayer, flexible control options and the highly touted HD rumble feature.

You can watch the Nindie Showcase video below:

Along with Nintendo Switch exclusives and timed exclusives, some of the titles coming to the Switch are:

You will be able to download these titles from the eShop directly from the Switch when they release, though you’ll need a Wi-Fi signal. The eShop will be available via a day one update.

Out of the titles announced today, Flipping Death, has me most intrigued. It looks like a really cool and fun title with a great art style. Do any of these take your fancy? Let us know in the comments below, on the RGM Forums or on Twitter. Feel free to share this article on Facebook, Twitter, Google+, Pinterest or Reddit using the buttons available!