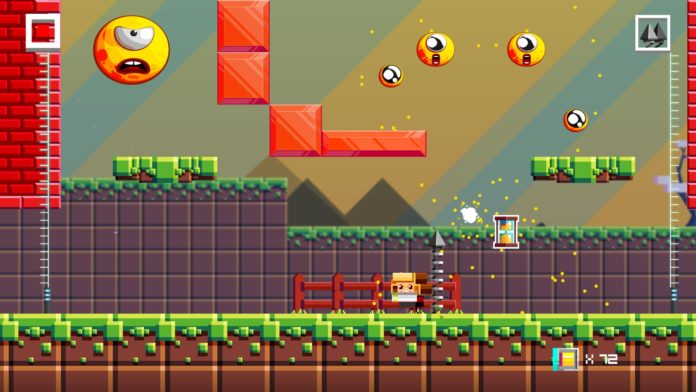 A few days ago, I watched Pixels for the first time and really enjoyed it (yes, everyone may have hated it, but I really liked it). By the end, I was really craving some retro gaming as the movie had taken me back to my childhood Atari days. I went back and reacquainted myself with games such as Zool, Fire and Ice and Rockfall (my childhood favourites along Lemmings and its criminally under-recognised and far superior sequel, Lemmings 2:The Tribes). You can now understand my mindset going into Spheroids.

Once I navigated the fairly unclear main menu (press x to continue: *jump*, still on the main menu…), I immediately fell in love with the presentation. I was instantly taken back to Maniac Mansion/Day of the Tentacle through the mad scientist narrative and humour and was impressed with the gameplay. It’s an odd statement to say that the controls are less than perfect in a positive way, but the off physics actually go a long way to recreating that Atari retro feel; the game is completely responsive to control inputs with no noticeable lag, but the game requires a level of precision in jumps and landings that is usually much more forgiving in modern platformers (with the exception of the wonderfully challenging Super Meat Boy).

The game presents plenty of challenge from the off, ramping up the difficulty at a slightly higher than average pace. The mechanics are simplistic but fulfilling; the simplicity of the 2D side scrolling platformer is enhanced with power ups for the protagonist’s weapon and shield. In order to defeat the titular bouncing Spheroids, you have to hit them with the Modified Drilling Hook, which can only be aimed straight up or down whilst the enemies can split in two and quickly fill the screen with the potential to become reminiscent of bullet hell gameplay.

The game also provides other devices to help traverse the game world, including attachments to help you swing and climb through the levels.

There are regular save points which circumvent any frustration and the game also remembers which enemies have been defeated, allowing easy passage through sections which could otherwise be impassable for less than expert players. This is the game’s secret in terms of accessibility; we get genuinely challenging gameplay that feels like it’s straight out of the late 80s/early 90s but with enough modern devices to keep less devoted players keen. The contemporary polish is applied perfectly too; not so much that it loses its retro feel, but pretty and responsive enough that the game really shines on modern hardware.

The level design was crafted expertly. The levels are beautifully coloured and have an old school feel to them. The clever interaction and diversity of enemies and locations make it a joy to play and the soundtrack feels wonderfully 80’s. I defy anyone not to find themselves humming the ridiculously catchy early level music after playing through the first batch of the 32 levels on offer. There’s no doubt from the presentation that this is a current generation game, but it harks back to glory arcade days and will keep any fan of retro gaming completely satisfied.

I love this game. It’s the most fun I’ve had with a retro 2D platformer since DLC Quest, and if you liked that, you’ll appreciate the humour and gameplay on offer in Spheroids.

Check out the gameplay trailer below:

Let us know what you think; does this fulfil all your retro dreams? Or is retro gaming best left behind in favour of all new things? Get on the forums and get talking!