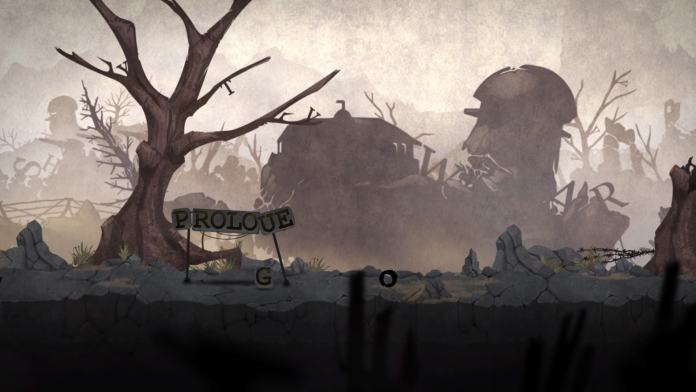 A spelling bee might not be the first thing to come to mind when you imagine a 2D platformer. Yet, Typoman: Revised is a puzzle platformer that is all about spelling. Developed by Brainseed Factory, in Typoman: Revised, everything is build out of words, literally. You play as a HERO in a desolate, apocalyptic ruin. You wander, moving letters around and creating words to solve puzzles as you attempt to figure out just what has happened to the world. You’ll face dangers around every corner, with environmental hazards and sinister creatures alike all capable of killing fairly quickly.

As the HERO, you can’t fight directly. However, by spelling out different words, you can use your environment against foes or to get through the various traps and dangers you’ll face in the wasteland. 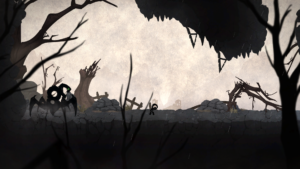 You pick up and throw various letters you find, rearranging them to create new words. This is a very creative process, as there are hundreds of words to discover. Some may harm you, others might help. In addition, when you run into a new puzzle, it’s never a straightforward one-and-done deal.

Many of the puzzles have multiple solutions, as different words will allow you to proceed. After all, there are many ways of saying the same thing. In addition to the countless words you’ll be spelling out, there are also quite a few phyics-based puzzles. Jump at the right time, swing the rope the right distance and the like. Or else. Unfortunately, the HERO dies easily, as a single hit from any danger will kill him instantly. Fortunately, the game is very generous with checkpoints and I never found myself wishing for a more recent autosave.

The story present in Typoman: Revised is both somber and subdued. It’s clear some disaster has taken place, but what it was and why? That’s nowhere near as clear. You gain some insight into the past by picking up Quotation Mark objects. These give you quotes from a mysterious figure that help to shape a picture of why your surroundings are in their current state. 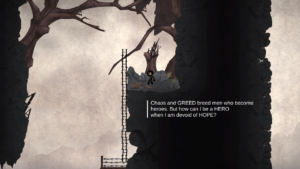 There is also an angelic figure who appears to be interested in guiding you as the HERO to a certain goal. Of course you can’t forget the monstrosities interested in opposing you either.

That said, ultimately I feel this is probably the biggest letdown for Typoman: Revised. Having a vague story is fine, however I truly feel there was more potential in this world than is actually realized. It’s a shame, because the way everything living or otherwise is constructed out of words makes me very curious about the history of this strange world.

Typoman: Revised clearly aims above a standard 2D platformer. The background blends with the foreground and the entire game has an almost watercolor quality to it. The skyboxes, in particular, are wonderful to look at. The creatures stand out with sinister angular designs and there is a wide range of variety in the enviroments. Broken down factories and calm forests are just some of the many places you’ll traverse.

Some of the textures, upon close examination, are not exactly high quality. However, it’s not a major concern. The game uses a full 1080p display, so everything has a fairly even, non-jaggy image quality. The framerate is fairly smooth throughout as well. However, there was one major issue I encountered. Oftentimes, when I moved from one large area to another, the game would briefly freeze. Never more than a second or two, however it was still frequent enough to become a fairly large annoyance when I was playing.

The soundtrack is haunting and moody, with a calming main theme that helps put the player at ease. I think this is an interesting choice, as it’s fairly disjointed with some of the terrible things you’ll encounter while playing. There are few moments where it picks up, when a horrifying new enemy is revealed, for example, but by and by it’s merely there to help soothe and set your pace. Otherwise, the sounds in the game are fairly basic, with the screeching of various creatures and the grinding of machinery warning of danger around every corner.

If you are an achievement hunter, there is a decent amount of replay value to be had here. There are achievements for finding certain numbers of words, solving puzzles in atypical ways, finding all of the quotation marks and more. Obviously you’re still free to enjoy the game and try it out differently even if you don’t care for achievements/trophies, however, I don’t think there’s many compelling reasons beyond enjoying the beautiful backgrounds or trying to solve a puzzle in a different way.