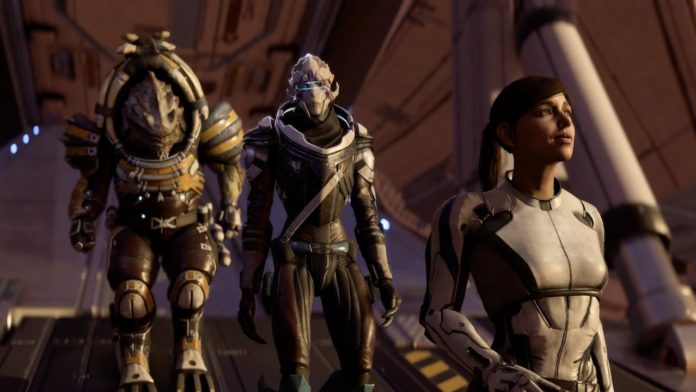 Bioware has been clearly listening to fan feedback, as they’ve released multiple patches already and don’t seem like they’ll stop there. On Sunday, Bioware released Patch 1.04, and Andromeda producer Fernando Melo laid out the details of the multiplayer patch on Twitter. He said the patch includes “fix black screen / Corsair utility, MP sound, MP F-keys issues.” Initially planning the patch for the weekend, Bioware seems hard at work on resolving gameplay flaws sooner rather than later.

Judging by Lead Designer Ian Frazier’s Twitter account, it seems like he hasn’t had much time to sleep recently. Whether it was about expanding character creator or even adding romance options, Frazier discussed possibilities for each.

Whether it was questions about expanding male/male romance options or fixing those infamous facial glitches, Frazier responded. He discussed that Bioware is looking into improving character customization with “many potential options.” When it comes to incoming patches, Frazier said they’re “looking at patching lots of issues” and want to “strongly support the game moving forward.” Frazier definitely couldn’t answer much as numerous responses include plenty of uncertainty.

There are likely plenty of meetings over at Bioware HQ regarding several different issues and potential fixes. While expanded customization is being discussed, Frazier’s comments indicate the team’s focus is on the technical issues. Fans may be disappointed now, but making the game more technically sound will only help strengthen the core gameplay. In the meantime, carry on Pathfinders. There’s plenty of exploring and romancing to do.

Have you played Mass Effect: Andromeda yet? What do you think about it? How does it stack up to other games in the series? Let us know in the comments below!