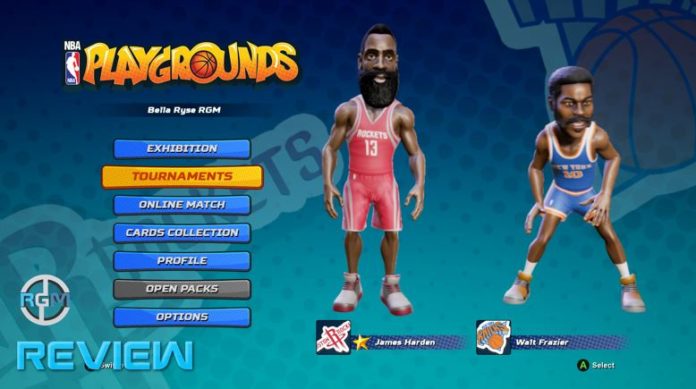 “BOOM SHAKALAKA” was the first thing I said when I saw the announcement of NBA Playgrounds. As someone who has put countless hours into NBA Jam: On Fire Edition, I was extremely excited to hear that a current generation version this much-loved franchise was going to be released.

For those who have played NBA Street and NBA Jam, there is no denying that we have all been waiting for a long time now for the next installment in this franchise. Body slamming your opponent off the court with a power dunk, intercepting a pass and landing a long-range 3-pointer, few things in life are as satisfying, especially when you can hear your friends weeping as your score gets higher and higher.

Knowing that many of my friends were lining up to verse each other prompted me to put in some serious hours of training so that I could hold my own on this new playground. After unlocking all the maps through the single player tournament options and attempting to embark on the multiplayer aspects, I bring you my review of NBA Playgrounds.

Shooting, as you would imagine, is a rather important part of NBA Playgrounds. This is a mechanic in the game that seems to be met with a bit of confusion for those coming over from NBA Street and NBA Jam. I must say that I personally didn’t have the issues with this that some others are having as I very early on realized that to land my shots I needed to time the release of the ball based on the animations of my player. Once you become familiar with where the ‘peak’ of your character’s jump is, you simply release for the shot and most of the time you will land a perfect shot. Given that this takes some time to master I can see why many are not entirely happy with this mechanic however, I feel that it brought an extra layer of skill to shooting which I found refreshing. The developers have clearly been taking notice of the complaints surrounding this though, and will soon be releasing an update that will introduce a ‘Shot Meter’ to the game. Hopefully that will be to more people’s taste. 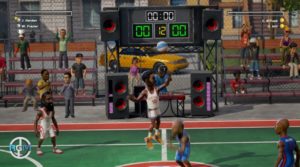 Regardless of if you are aiming for a long-2-pointer, that ever satisfying 3-pointer, or going in for the dunk, timing is essential. By applying the above-mentioned timing to your shot and landing it perfectly, you can earn yourself a bonus point. This is a new mechanic that is geared toward the more ‘elite’ players who really want to master this game.

The lottery pick system is designed to give you in-game bonuses for playing smart. If you play like a street thug, you will lose your lottery bar momentum. The more you score, the more you earn. Filling your lottery bar will result in being awarded random bonuses such as a 2x 3-point advantage, the glowing ‘blue ball’ that increases your shot percentage, or my personal favorite, the super speed shoes or ‘Flash Shoes’ as I like to call them, that (as you guessed it) make you run faster. All these ‘perks’ are limited for a short time only so you need to be aware of what each bonus means so that you can take full advantage of it while it’s active. You can inadvertently lose progress on your lottery bar though by pushing your opponents, so be sure to check the bar first before playing like a thug as you could lose a lot of progress towards an important advantage.

Whilst shooting is clearly a major focus, making sure your defense is solid is just as important. Playing defensively can chew at your stamina bar though so be sure to keep an eye on that, as you lose the ability to perfect certain moves on the court if your stamina is depleted. Using the turbo, cross-overs, pushing your opponent, all these actions have consequences. You can mitigate these consequences though by keeping a close eye on your stamina and lottery bars and using your defensive moves accordingly. Timing is very important when moving in for a steal or block so again, pay attention to the character animations and you can easily learn how close you need to be and what timing you need to apply when jumping up for a block.

The control system has evolved slightly too, with new variations of button inputs added for performing stunts such as alley-oops. Whilst this takes a little while to re-program yourself, I find it actually makes the gameplay a bit more fluent than that off NBA Jam.

For those of us who are a bit more ‘old school’, you will be thrilled to know that you earn card packs from winning games. These card packs contain players and this is how you go about unlocking the members for your teams. I really enjoy this element of the game. I know many are rather frustrated though as they are at the mercy of the card pack ‘drops’ to get the specific players they want for their ultimate team, so I guess this comes down to the individual and just how invested into NBA Playgrounds you are.

Once you pick your favorite players,  I recommend sticking with your top two for at least a few dozen games, as you will be able to unlock new moves and even signature moves for most players by levelling them up with the XP you earn. 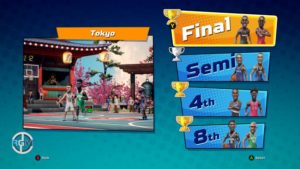 There is a lot of fun to be had through couch co-op, online search (if you can get a game) and even just playing solo however, let’s be frank – that’s not where the most enjoyment is found in these types of games. Playing against our friends is one of the most engaging and entertaining elements that we loved in NBA Jam and what most fans of the franchise were looking forward to in NBA Playgrounds.

I understand that sometimes budgets run dry, or release dates creep up on developers quicker than they expect. Whatever the reason though,  I don’t think releasing a game in 2017 with peer-to-peer networking AND omitting one of the most important features in the game, is acceptable. I also understand that many studios use peer-to-peer networking but when this affects your ability to play with friends on the other side of the globe, that’s a very large problem. I only hope that when they implement the ability to verse your friends that this approach doesn’t mean that we can only play with friends in our own country (or close to it). For those of us that have online friends all over the globe I really hope that we will be able to enjoy whooping their butts on NBA Playgrounds when it’s finally an option.

For those of us moving over to NBA Playgrounds from NBA Jam, one of the most notable differences in this regard is the almost underwhelming soundtrack and the lack of  ‘snicker inducing’ call outs from the commentators. Whilst the soundtrack is decent, it just hasn’t hit the mark with me the way that I hoped. I think I was just a bit spoiled with NBA Jam and the atmosphere the soundtrack helped to create, and I probably need to let go of the past and just accept we are dealing with two different development studios here and they both have their own flair. 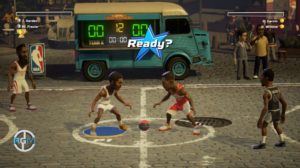 Saber Interactive in all fairness have a catchy soundtrack and have worked in a few good puns along with the occasional ‘dad joke’ that you give you a giggle. Missing a shot will sometimes result in the comment of “I hear they are doing great things with corrective lenses these days” which I get a chuckle out of however, that seems to be the only catch phrase that has stuck with me after many hours of game play. Let’s be honest though, how does one beat “BOOM SHAKALAKA”? #ICONIC

Please note that this review is missing a rundown of the pros and cons of the multiplayer aspect as I was unable to connect with other games through the online play search, and the absence of the option to verse my friends. I will revisit that aspect once the search options are fixed and versus options are added.

Please see below for my summary and score of NBA Playgrounds.