Going into Prey, I already had a great deal of respect for Arkane. They know their craft, with Dishonored and Dishonored 2 both being astounding successes in game design. Not to mention, we’ve all heard game pitches and taglines that weren’t even remotely true. ‘Open world’ and ‘freedom of choice’ are tossed around like candy nowadays for promotional purposes. Yet still none of that prepared me for Prey.

Prey is haunting. Prey is a dream realized, forcing you to push yourself outside of a nightmare. It is true freedom given to the player that they might do as they will, giving each choice purpose. 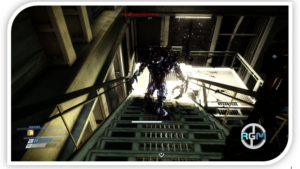 It’s the sort of game you feel enamored with, with every facet of design hinting at a greater intelligence beneath. It’s fun but difficult. It teaches you to walk, then encourages you to learn how to run.

Players step into the shoes of Morgan Yu, who can be male or female. While it doesn’t change how the game functions or drastically alter the story, small encounters, portraits and dialogue sequences are changed to accommodate Morgan’s gender, which adds a nice touch to immersion. The story in Prey revolves around an alternate timeline in which John F. Kennedy was never assassinated and space exploration continued at a benchmark pace. Over time, the space station Talos 1 was born, the pinnacle of human scientific advancement.

The introduction of ‘Neuromods’, highly advanced treatments injected into your brain via your eye, unlocked human potential. Neuromods target the learning centers and mental blocks of the human brain, allowing someone to learn calculus or become a sharpshooter overnight. Morgan Yu works with his or her brother Alex Yu; together they focus on pushing Neuromod research even further in an experiment. Without giving away the story, things are not at all what they seem and you’ll soon find yourself doubting everything around you while trying to somehow stay alive and contain the horrific aliens called Typhon that have overtaken Talos 1.

While it’s difficult to talk about the storyline in-depth without ruining multiple plot twists, suffice to say very few people you see or hear can be trusted. Almost everyone has an agenda; thanks to your memory loss, that includes you!

Let’s get one thing out of the way: you’re going to die, because inevitably, learning how to play Prey takes a bit of time. This is not a shooter like DOOM and you are not an unstoppable killing machine. 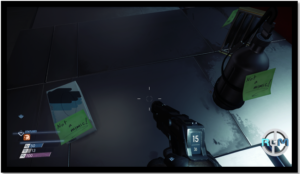 While there are firearms such as the silenced pistol and the oh-so-satisfying shotgun, there’s also the nonlethal shock pistol, not to mention one of the most innovative weapons I’ve ever seen, the GLOO cannon. Most enemies can be temporarily stopped in their tracks with the glue and are then opened up to critical attacks. However, there are far more intuitive uses of the gun.

Can’t reach a platform way above you? The GLOO cannon can make an impromptu flight of stairs. Electrified floor? GLOO cannon walkway. While the GLOO cannon stands out, this is really true of Prey’s entire gameplay design. Every single problem will have multiple solutions all of which are valid, though some may fare better than others. Enemies can be scanned with the Psychoscope, which unlocks new powers and details enemy weaknesses. If you don’t use the right weapon, power, or at least try using your environment creatively, most Typhon can and will stomp you into the ground. Special note must be given to Mimics, capable of morphing into any random object in the environment, inducing tension when you first step into a room.

There’s also other skills that come in handy, such as hacking, which triggers a sometimes challenging minigame to rewire the appropriate circuits. Of course, the powers gained from using Neuromods clearly stand out as a highlight. From the useful but basic super-strength, to the near-laughable ability to copy a mimic and morph into a coffee cup, everything has at least a few useful purposes.

At every moment, Prey utterly lives, breathes and bleeds atmosphere. Talos 1 is by far one of the most impressively designed locals I’ve ever seen in a game. Every room tells a story, with whiteboards filled with equations, leftover toys used in pranks between coworkers, roses left on a partner’s desk. 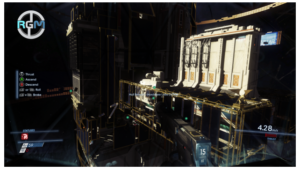 Each step engrosses you with worldbuilding of the highest caliber, as Talos 1 truly feels alive. Finding audio log after audio log from a station worker who is trying to escape the Typhon was absolutely riveting, with countless outcomes that perhaps depended upon casual, unwitting choices I made. At no point was I actually required to help anyone but simply wandering the halls and stumbling upon these dozens of hidden stories made me feel truly invested.

Ultimately however, the greatest moment by far, that truly helped me understand the scale of Prey, was the first time I flew into space outside the station. Seeing Talos 1 in its enormity, while understanding that I could seamlessly fly into any airlock or hull breach to traverse the levels, was truly breathtaking. Everything was to scale, the orbit of the station correct, the moon casting a pale glow, it was a wonder to behold.

It’s also worth mentioning that Talos 1 is designed as a self-sufficient space station, with every room designed to serve a purpose. Different divisions, life support centers, engineering stations and even restaurants all add authenticity and believability. This does lead to one of my only issues with the game however, as this isn’t a completely open world but instead sections that require loading screens. It’s not the end of the world but if you’re backtracking for a side objective it could get a bit tiresome.

From the moment you first take control of Morgan, Prey looks great. The aesthetic choices aid the graphics, with smooth shadows and clean textures. The resolution always seemed crisp, with no obvious drops in quality or low-res textures distorting the visuals. 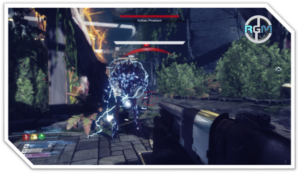 The Typhon are otherworldly and weird in appearance, while Arkane’s signature design throws friendly human faces off, placing a cynical glare over everyone you encounter.

The soundtrack is beautiful, with the main menu music instantly luring you into an eerie mental state. Combat is accelerated through frenetic tones and distorted whispers, and choice of pop-synth tunes during downtimes creates an excellent contrast. However, I must say, hearing the same two tones upon every death got old, fast.

With such an emphasis placed on playing how you want, it should come as no surprise that the replay value offered with Prey is insanely high. Each problem has multiple paths and solutions, assuming you choose to tackle it at all. You could play through the entire game without ever touching a Neuromod, or being selective about the types of powers you pursue. As the story reacts to every conscious decision you make, there’s nearly limitless possibilities. Some endings might only take a few hours to reach, others might take nearly 30, it’s all up to you. 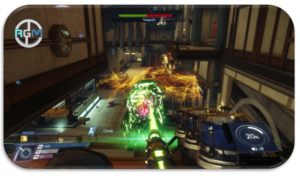 Please see below for my summary and overall review score for Arkane Studio’s latest title.