Cross-platform seems to be the newest flavor of the month in gaming. It’s certainly popular and from a developer point of view it makes sense; increase your potential player base for a multiplayer title and run less risk of having empty servers. Now it seems that another title will be adding ‘cross-play’ to its features list, Sea of Thieves.

The upcoming pirating adventure game, currently in development at Rare Studios, will indeed support cross-platform gaming. This means that players on Windows 10 PC can play with their Xbox One (including Xbox One X) pirating mates and vice versa. PC Design Lead, Ted Timmons and Executive Producer Joe Neate for Rare made the announcement.

Confirming the news via a post on the Sea of Thieves website the developers go into some more detail about cross-play:

“The first thing we asked ourselves when discussing the opportunity of cross-play in a shared world game is “Why would we segregate players in the first place?”. It was hard to think of a really strong and valid answer to that. Were there technical reasons? Were there game balancing reasons? Or was it just because so few had asked this question before? So we set to work…” 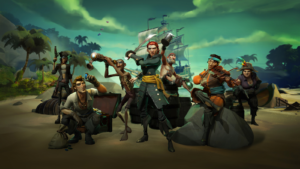 “Here at Rare we’re building Sea of Thieves in complete feature parity across platforms, and we’re taking full advantage of Xbox Live – why shouldn’t gamers on different devices play with/against each other? What was incredible about our first test of cross play was that it “Just Worked™”. Of course, our services team had put in a TONNE of work to get to the point of having a game running across dedicated servers on two different platforms, but to then flick a switch and have it just work with not a single bug found or entered in the database?! It was an amazing experience to have reached that point, and since that day several months ago we’ve been testing internally every day in our compatibility labs across a wealth of different PCs, Xbox Ones and Xbox One Xs (more on that later).”

The Magic of Cross Play

“I remember the first time I tried cross play at home: I was playing with some of the other designers in a Wednesday night Technical Alpha session and initially I forgot we were even on different devices! It was amazing how normal it felt in such a short space of time, to the point where it makes you wonder why it’s not more common in gaming. Joe Neate (Executive Producer) put it best in his email to the team the next day, where he called it a “magical experience” – and it was true. It’s funny how something as seemingly simple as playing with a friend on a different device felt so special, and we’re hopeful this will continue to become a more common sight in gaming.”

Play the Game, Not the Device

“Player habits are changing. How and when we watch or play games is very much in an “on demand” world. Therefore one of the other advantages to cross play is, for example, if a family member is watching Netflix through the Xbox One in the living room, you can just jump onto your Windows 10 PC or laptop and carry on from where you left off. Then when they’re finished and want to join you in-game, you can simply invite them in and potentially even be in the same room as your newly formed co-operative crew. This level of luxury in choosing the game you want to play – instead of only playing on the device that’s available – is a really powerful ability for a lot of our audience with more than one device, and we want them to be able to take full advantage of it.”

“An interesting part of cross play is how wide it throws open the doors for different communities to engage and play together, and therefore increases the wealth of stories you’re likely to tell. Some of our Deckhands (the closest members of our community) had until recently never been able to play the game together as they game on different devices, but now they’re able to share an experience without the barrier that previously blocked them. Also, they’re able to encounter different player types and make new friends – and of course matchmaking will always be quicker when there are more players to play with.

One of the things we’re very aware of is the need for the balancing to be right. After running some recent tests, we found that PC players were 4.5% more efficient at killing skeletons than Xbox players, and this feels close enough that it’s something we’ll continue to monitor. However, PvP between platforms, or more importantly device input, is the big focus point for us as a Design team, and already we’ve been working closely with the Game Experience team to change the way the guns work to be better balanced for cross play. We’ve put in a bunch of telemetry around this, and with the change to guns it’s made them feel tonally so much more fitting, as previously they felt more like laser weapons than ancient plundered-and-pillaged gunpowder-driven blunderbusses.”

The post also notes that cross-play will be added to the Sea of Thieves technical alpha which is currently running for members of the Insider Programme.

I’ve given Sea of Thieves a quick go and I really liked what I played of it. There’s still a whole host of features and experiences to discover and adding in cross-play will only increase the wealth of stuff to do.

Sea of Thieves will launch in early 2018 for Xbox One (with Xbox One X enhancements) and Windows 10 PC.

Are you looking forward to Sea of Thieves? Have you been lucky enough to play in the technical alpha? Let us know in the comments below or over on our Twitter page.