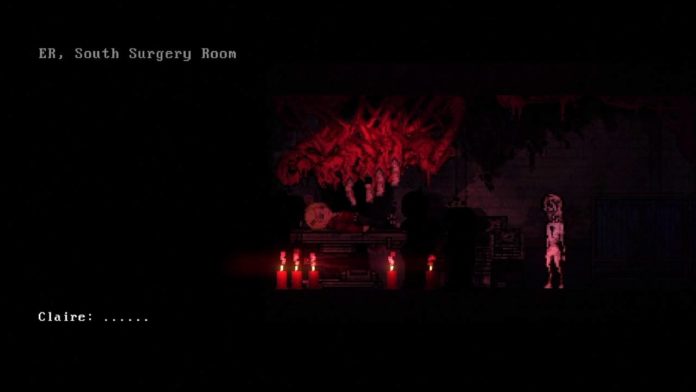 After many weeks, where the PlayStation Store really blew my mind regarding deals for the holidays, it seems we need to go through a calm period. The amount on sale is really slim this week. To go for my deal of the week then, I’ll go ahead and give the spotlight to an indie game that was released about 1.5 years ago. It brought pixelated horror to the masses for PS4 and Vita. This cross-buy game is now 70% off ($5.99 CAN / $4.49 US). I’m talking about: Claire: Extended Cut

While visiting her sick mother, Claire takes a wrong turn and stumbles into a dark passage of echoing doors and abandoned rooms. Lost, and attempting to find her way back, Claire encounters an over-protective dog and few denizens who are seemingly uninterested in Claire’s plight. Did they block the doors and windows to keep something out, or is a malevolent force stopping Claire from leaving? Why are red candles scattered across the grounds, and why does the sun seemingly never rise? As panic sets in, time slips and begins to fall away. Find the truth, and help guide our protagonist thru the expanded and re-defined Claire: Extended Cut.

Features:
– A blend of modern and retro pixel-art techniques creating a rich 2.5D world.
– Panic-based horror system that reacts to your decisions and Claire’s panic levels.
– Multiple difficulty modes, including Nightmare mode where Claire can die from panic.
– Multiple endings based upon the player’s choices.
– New enemy available exclusive to Extended Cut.

Spear of Destiny The Kaiseki

Spider: Rite of the Shrouded Moon

Sword of Fortress the Onomuzim

The Last Tinker: City of Colors

The Last Tinker: City of Colors Game and Theme Bundle

As you can see, the list of games on sale is pretty slim. Have I missed anything from the PlayStation sale? Let us know in the comments below. In the meantime, let’s hope next week will be better and happy gaming!