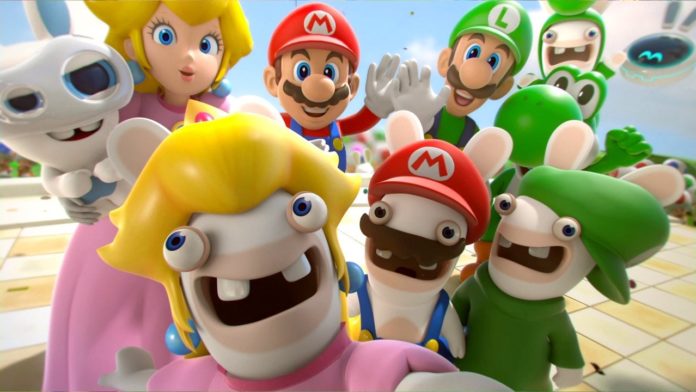 When the idea of a game that involved a crossover between Nintendo’s Mario and Ubisoft’s Rabbids was leaked, people were very dismissive about the idea. The official reveal happened at E3 last year and the meme #Don’tCryUbisoftMan started when Davide Soliani, director of Mario + Rabbids Kingdom Battle, was caught with tears in his eyes during the announcement. Many gamers felt that this game could be a great idea and I can confirm that it is the happiest surprise of 2017. 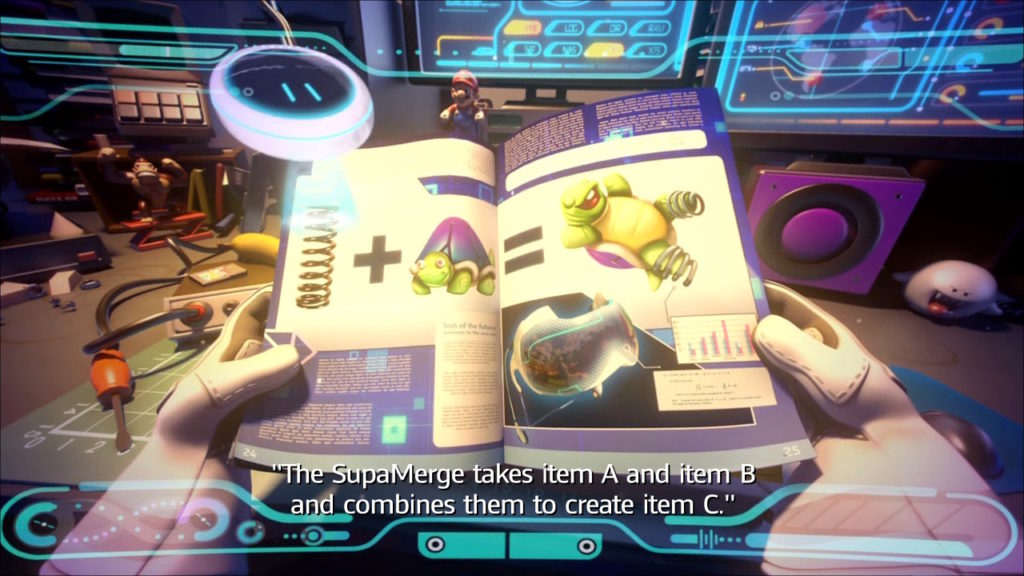 The game starts in an undisclosed world where a young inventor is working on a device called the SupaMerge helmet, which allows any 2 objects to merge together. When the inventor leaves the room, we see a group of Rabbids appearing, with the help of a Time Washing Machine.

Soon afterward, chaos breaks out in the laboratory, during which, one of the Rabbids puts on the helmet. The device starts to shoot lasers and incidentally hits the Time Washing Machine, opening an interdimensional vortex between the Rabbids and the Mushroom Kingdom worlds. The Rabbids are transported to the Mushroom Kingdom and start wreaking havoc. The voyage between worlds corrupts the Rabbids except two – Rabbid Luigi and Rabbid Peach. Along with the help of Mario, Luigi and an intelligent robotic device called Beep-0, they embark on a journey to bring things back to normal. 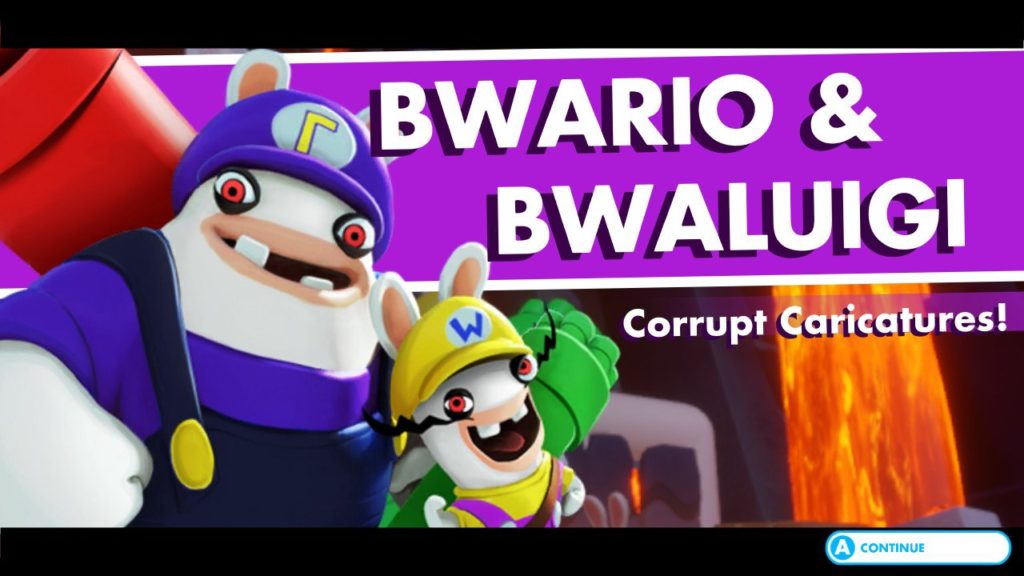 It is a story with a strange premise but is a great context to visit many worlds and characters of the Mario universe. Many bosses are Rabbids versions of evil Mario characters, like the ones that you can see in the screenshot above. The storyline itself is full of fan service and is a lot better than I expected. There are fun twists, the writing is very good, and there is plenty of humor to provide a lot of laughs (especially around the Rabbids). The game itself is just a feel-good game and I had a smile on my face pretty much the whole time. 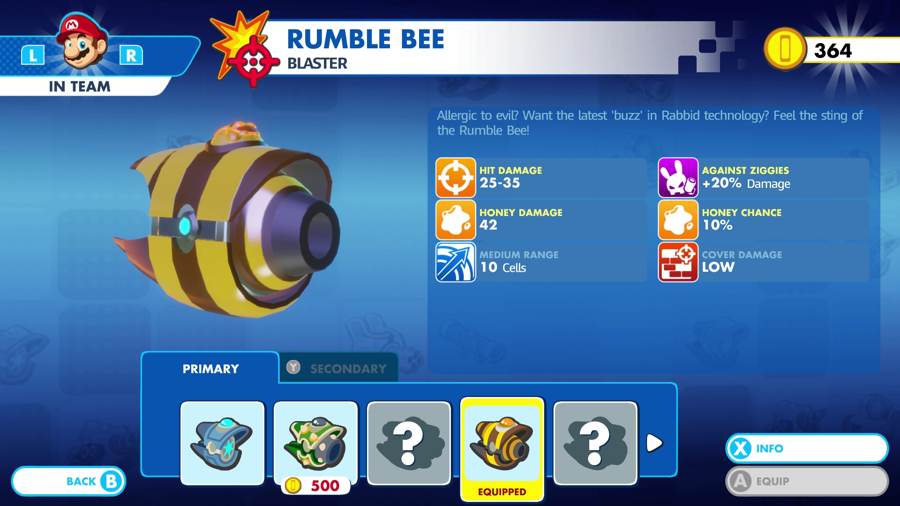 When I first heard about this game, I really had a hard time trying to picture our beloved friendly characters of the Mushroom Kingdom with weapons. After decades of hopping on enemies and using special powers, seeing Mario, Peach, Luigi and friends equipped to fight with guns, shotguns, grenades, etc. is definitely a breath of fresh air. Some of the weapons look like they took a page out of the Mega Man series. I really have to give special congratulations to the team of Ubisoft for creating this vision and to Nintendo for approving it! 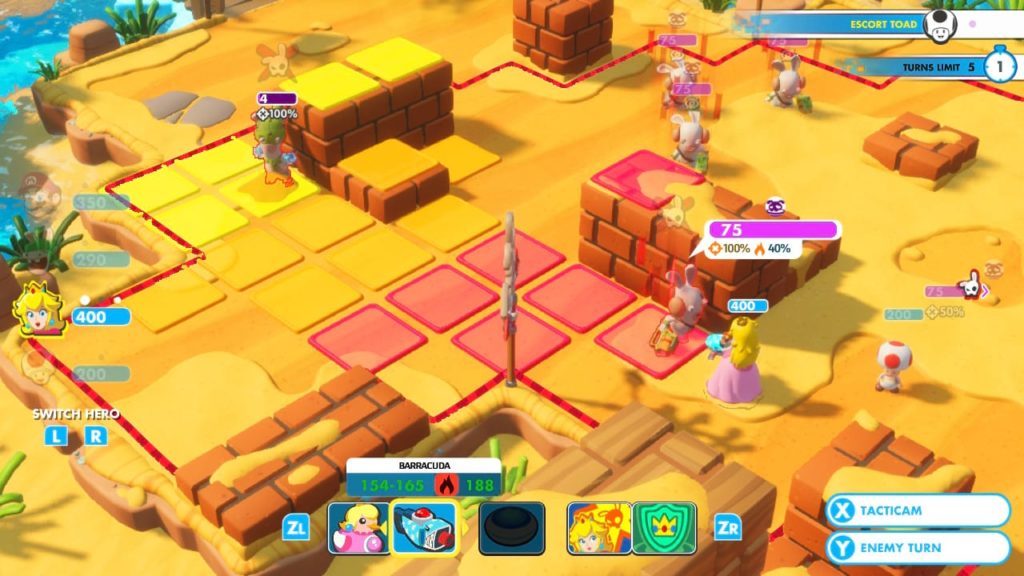 Mario + Rabbids Kingdom Battle is a tactical strategy game, in the veins of the very popular XCOM franchise. Battles are turn-based and you have four kinds of objectives depending on levels: kill all enemies, kill a specific enemy (which is a mid-boss or boss), kill a certain amount of spawning enemies or escort a character to a specific zone of the level.

Between each encounter, you will navigate through a world map which can be explored Metroidvania-style. Your robotic aide Beep-0, will get abilities as the game progresses which, will allow you to explore many hidden sections of each region. There are four regions in the Mushroom Kingdom. At the center resides Peach’s castle, which serves as the gameplay central hub. 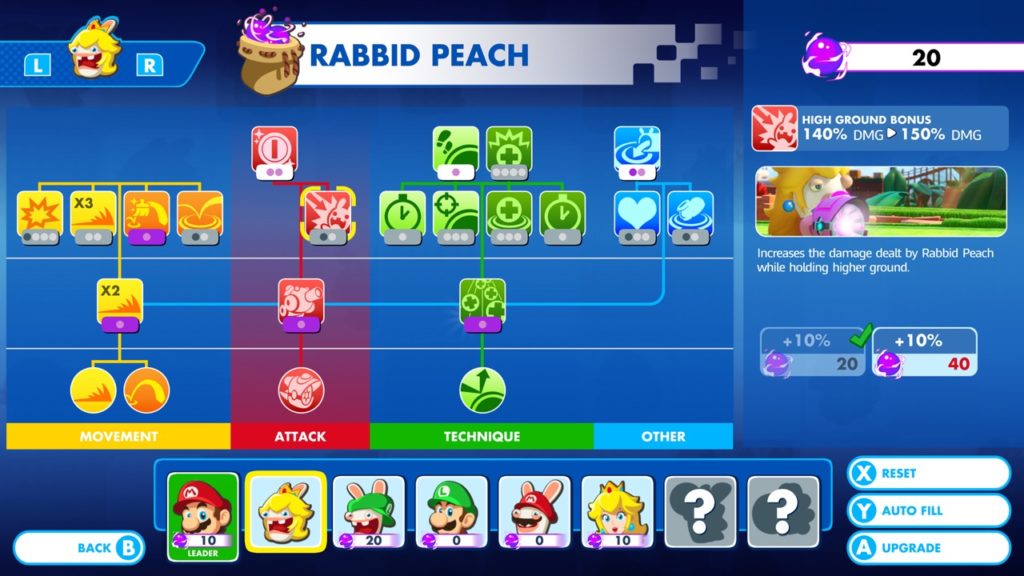 Before each encounter, you can customize your team of four heroes with weapons and secondary weapons. They can be obtained by purchasing them with gold coins in the world map or by winning encounters.  You can also obtain power orbs, which can be used to upgrade and unlock special abilities to your heroes. The number of coins and power orbs you get from encounters depend on how well you played, how many turns you take and if a hero dies.

The game can be pretty difficult at moments. Some of the battles really test your knowledge of abilities so you need to think before each move and play really carefully. If it gets overwhelming, each battle can be played in Easy Mode, which gives a 50% boost in health and a full healing to every hero. There are no penalties for choosing Easy Mode so it is a very nice touch for the newcomers to the tactics genre. The fact that the player doesn’t need to worry about where to use those orbs is also great. The skill tree can be reset and the orbs redistributed at any time. I admit that I used it a couple of times throughout my playthrough. 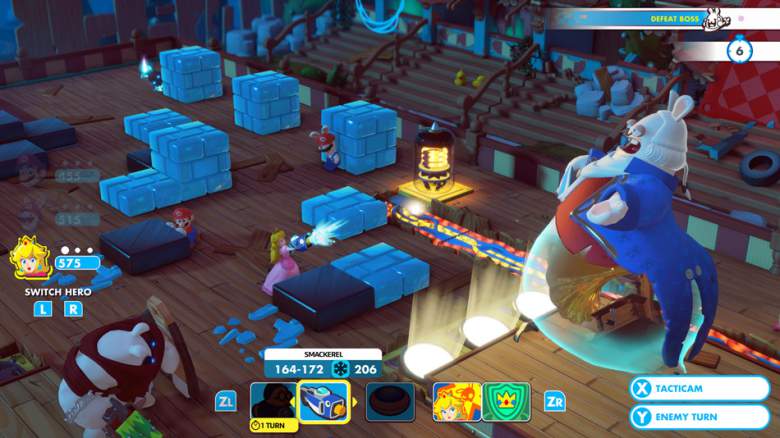 Ubisoft gets kudos for their work on the game’s graphics and presentation. They’ve managed to create a game faithful to Nintendo’s vision that it could easily be mistaken for a made by Nintendo title. The colors are faithful and brilliant, and everything is really authentic to Mario’s legacy. This is a double compliment considering the fact they actually created a vision of those iconic heroes with guns and that just works. Nothing feels out of place and is really well represented.

The same can also be said about the sound department. Every little distinctive sound effects and voice can be heard throughout the campaign. The music sounds really good too and accompanies Mario and his friends perfectly. The last two boss battles have songs that really remarkable. 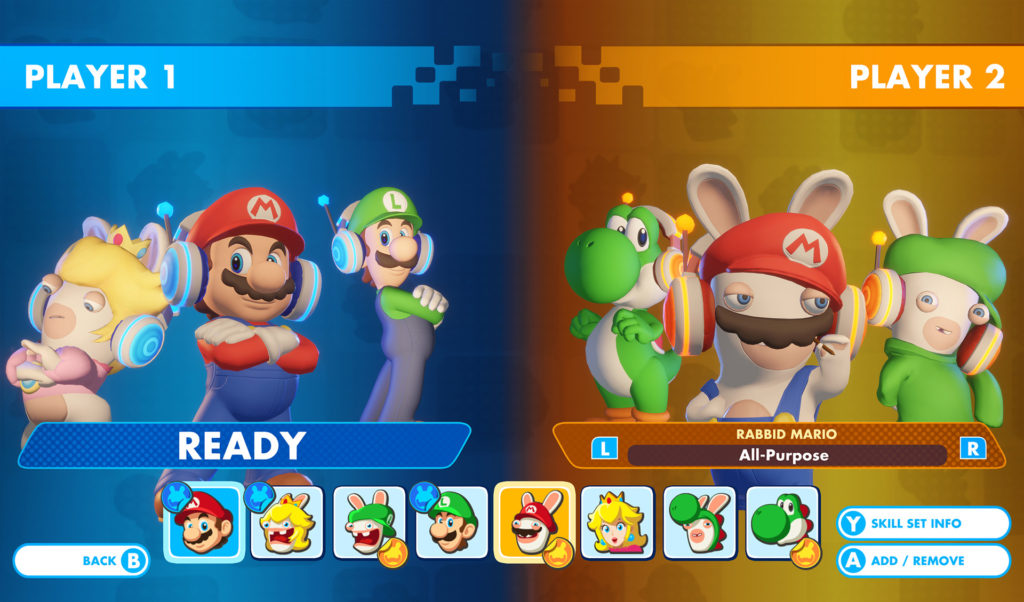 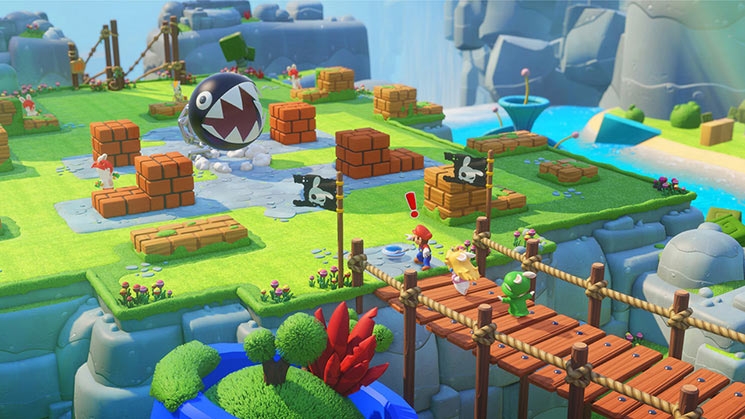 The game’s most difficult moments really make you work hard. It took me 40+ hours to complete the single-player campaign. Within this amount of time, I have just discovered 90% of the levels and uncovered 61% all of the treasure. After a region is cleared, there are additional challenges that appear which I haven’t even scratched the surface of. Between all of this content and the multiplayer missions, the replayability is incredible. There is also DLC content available.