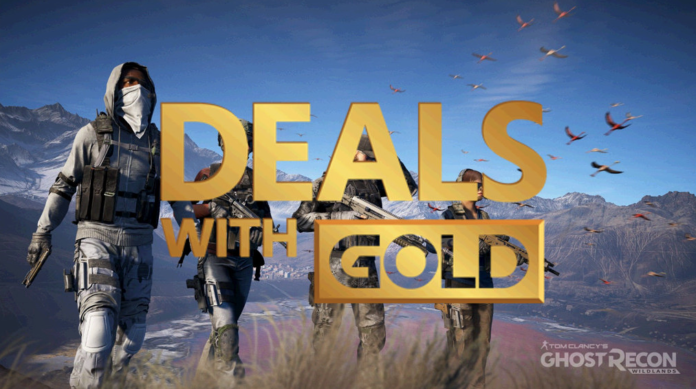 The Mid April Deals with Gold and Spotlight Sales have been announced via Major Nelson’s blog. This week there is quite an extensive list of discounts to choose from with the usual suspects scattered amongst them.

We couldn’t go past recommending Tom Clancy’s Ghost ReconWildlands – Gold Edition* though, at 67% off  between now and April 23rd.

Try Ghost Recon Wildlands for free! Play online with your friends and explore the country for 5 hours by downloading the trial!

HDR enhanced for richer, more luminous colors.* Extend your Ghost Recon® Experience with the Gold Edition, which includes both the game and Season Pass Year 1 giving you access to two major expansions as well as all Deluxe Edition content and an early access to 6 new PVP classes.

Create a team with up to 3 friends in Tom Clancy’s Ghost Recon® Wildlands and enjoy the ultimate military shooter experience set in a massive, dangerous, and responsive open world.

You can also play PVP in 4v4 class-based, tactical fights: Ghost War. TAKE DOWN THE CARTEL

In a near future, Bolivia has fallen into the hands of Santa Blanca, a merciless drug cartel who spread injustice and violence. Their objective: to create the biggest Narco-State in history

*HDR functionality available on Xbox One S with supported games and TVs.