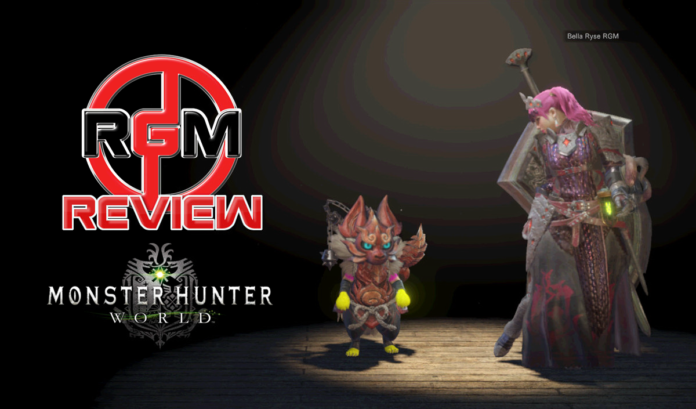 I ventured into Monster Hunter: World (MHW) completely blind. I had not played any of the previous instalments in the franchise and even though there were trailers and chatter everywhere about the game, I somehow managed to avoid it all so that I could have an extremely rare experience – going into a game with absolutely no idea about what it was that I was about to embark on.

Over 450 hours in-game later and I am glad I took notes from day one as my first experience with the game now seems a distant memory. Monster’s that seemed absolutely formidable are now puppy dogs in comparison, goals that seemed unachievable are now notches on my sword, and the grind……. well the grind is real. 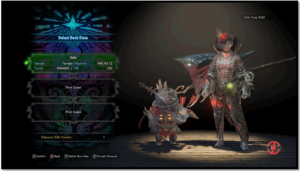 Whilst MHW was released back on January 26th of this year, we often don’t see reviews of multiplayer games from someone that has spent a stupid number of hours playing it and can offer you that kind of perspective, so with that in mind I have decided to bring you my review now that I have explored every nock and crank of the game.

Whilst the storyline wasn’t exactly compelling, it was a lot of light-hearted fun. Some rather questionable lip sinking coupled with cheesy dialogue keeps you company as you travel along though the main quests.

You will find yourself lingering before pushing forward, to harvest, collect supplies, and learn fight sequences however, I urge you to push forward as what you don’t realise early on is that you will hit level caps throughout the game and the only way to break them is to push forward with the storyline. 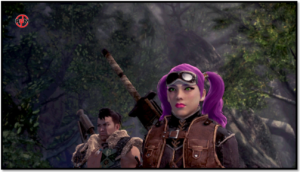 You spend most of the game shadowed by your handler who seems completely out of her depth and starts to get a bit annoying, however her sweet nature basically forces you to make yourself tolerate her and that keeps the annoyance at bay.

The plot is as you would expect, there is an imminent threat to life as we know it and you, the brave and always obliging protagonist, are tasked with rectifying the issue.

I found this light-hearted and somewhat predicable approach easy flowing and generally a lot of fun. I don’t need the wheel reinvented with every new game, sometimes it’s nice to know where you’re headed and just sit back and enjoy the scenery.

MHW can be played and enjoyed as a single player experience however, I feel like you would be missing out on the major drawing points of the game. Whilst you are tasked with completing your first encounters by yourself, where MHW really shines is in the multiplayer aspect.

If you have shaky internet or struggle to connect with others then you will still find endless hours of fun in MHW, it just comes down to individual preference.

Teaming up with (in most instances) 3 other hunters is where the fun really begins. As a team you are given a set of parameters that you must successfully complete your mission within, such as a 50 minute time limit, only being allowed 3 faints (deaths), and if the mission allows for a capture or kill, or must only be captured. This keeps things interesting as these slight variances from mission to mission stops tediousness settling in. 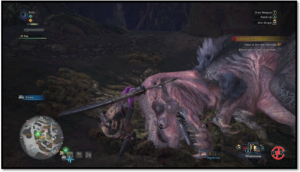 Your Palico is your trusty side kick, kind of like Robin but actually useful. You can customize your Palico’s appearance, loadout and clothing to suit your gameplay style and compliment your equipped skills/weapons. These battle cats are extremely helpful (well, most of the time) as you can call on them to launch various attacks, set traps, rejuvenate your health, and a variety of other battle aids.

You do have the option to leave your Palico behind and not take it with you into battle though and depending on the monster you are hunting that is a real consideration that you must remember to factor in. Some battles are extremely testing by yourself and your Palico can draw their attention which can be to your detriment. If you need to know where an attack is always coming from with a fast moving foe I’d recommend leaving your Palico at home with housekeeping. 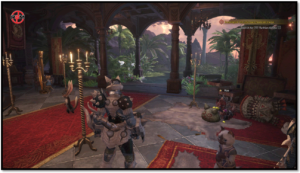 There are a bunch of fun challenges for you to complete along the way as well, such as various fishing tasks, finding a mystery animal, collecting certain items, and many more, which at the end of completion provide you with a very worthy reward.

Thankfully there is also a lot of variety in the “missions” you can choose to embark on such as investigations, re-doing story missions, optional missions, and events. These are all slightly different from each other and allow you to tailor your experience in the game and work towards certain items that you need for crafting.

This is where the smithy will start to consume your life as he requires various items that you must collect and/or harvest in order to build weapons and evolve them down different trees. Over time this can become a bit frustrating as you head off to kill Nergagante for the 15th time in a row, hoping against hope that a gem drops. The merit to this is you are kind of forced to fight monsters that you normally wouldn’t bother harvesting which means you learn the fight sequences down pat, making you an even more formidable hunter. Plus the spoils from these fights come in handy when you least expect it. 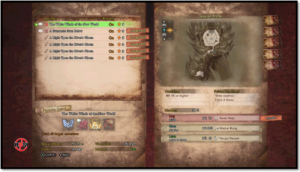 As a whole I thoroughly enjoyed the mechanics of this game and the diversity available to stop the grind from being nothing short of painful once you get upwards of hunter rank 60.

I did however, find the controls to be convoluted when it came to working out how to join your friends and figuring out that you both have to be in the same online session to be able to active the same mission – just some rather basic stuff that seemed to be over complicated. The up side though is that it didn’t take too long to get the hang of.

The load times is something I have to complain about. I understand the world that is being loaded is huge however, when you take into consideration the 30 second load time (on the Xbox One S) to join your friends instance, then another 30 second load time to get into the missions launch screen, then another 15-30 to get into the actual battle……………….that’s a lot of loading every 10-15 minutes.

MHW is an absolute joy to look at. These aren’t the very best graphics I’ve ever seen in a video game however they are right up there with some of the best this generation of gaming has produced.

As you can see from the images in this review, the sunsets are memorising, the outfits are vibrant and crisp, and the detail on the monsters is well defined. I can’t fault this game visually or in its art style, it’s just simply lovely. 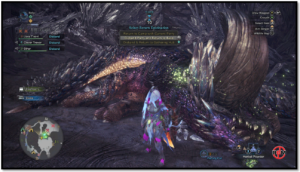 The grandiose battles are amplified by the clashing of metal against scale, electrified blasts sweeping the ground and fire setting the battle zone ablaze. Even the most energetic battle can feel a bit bland without well placed and authentic sound effects, and MHW does not disappoint in that regard.

I did however find that when I was in a team of four, who were all attacking at once, using elemental damage, traps, etc, that the game did struggle to keep up as there were so many sounds that they kind of just melded into one long continual sequence of bombs exploding. It didn’t happen very often but frequently enough that it did become annoying once I had levelled up as my attacks were doing significant damage which added to the catastrophe going off in my ear. 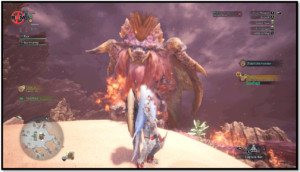 The only other and minor gripe I have (this had to be noted as someone that has spent as many hours playing this as I have) is that the music that loops over and over and over and over again when you are at base starts to do your head in after a couple hundred hours. MHW could have greatly benefited from a bit of variation here as you spend quite sometime there looking at your loadouts, crafting materials and weapons etc.

Please see below for my overall rating and summary of Monster Hunter World.