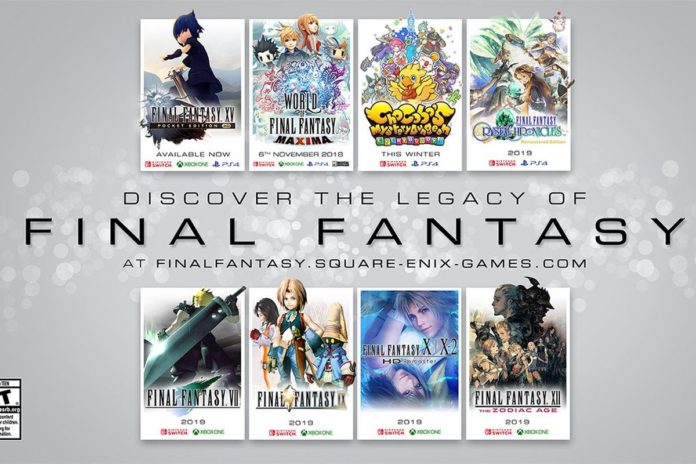 Hold onto your magical hats Xbox and Switch owners. Final Fantasy is coming to the consoles in a big way.

First announced yesterday during the latest Nintendo Direct stream; it was revealed that a number of previous entries in the series will be making an appearance on the Nintendo Switch. Later on in the day, it was also confirmed that the majority of these same games will be coming to the Xbox One too.

Check out the reveal trailer from the Nintendo Direct below:

The titles announced were:

This is great news if you’ve never had the chance to play some of these classics that were only previously available on Sony’s machines. Game Informer notes that the reason they are finally available elsewhere is that Sony sold off its stake in Square recently. Of course, if you’re anything like me you’ll have spotted a glaring omission; as have a lot of the internet. Where’s Final Fantasy VIII? That’s one of my faves and it isn’t getting the same release love as the basically every previous major release! Hopefully, fans will implore Square to do the right thing and make FF8 available too.

Many legendary #FinalFantasy titles are coming soon to #XboxOne over the coming months. Full details here on Xbox Wire. https://t.co/b4QXrPgNcN

More details are due to follow as we get closer to releases but I’m psyched to play some of these games again. I never got round to playing FF12 – The Zodiac Age so will look to get that perhaps. I’m also wondering why Crystal Chronicles and Chocobo’s Mystery Dungeon aren’t making their way to Xbox One but the other consoles.

Either way, more Final Fantasy for more people to play can only be a good thing. Are you excited by any of these announcements? Which game(s) will you be picking up? Let us know in the comments below or over on the RGM Facebook, Twitter or Instagram pages.