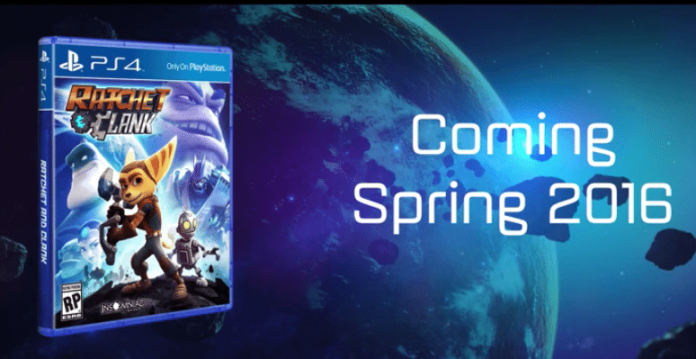 It’s an exciting time for all of us Ratchet & Clank fans as today Insomniac Games released gameplay of the latest installment in this thriving series. To be expected just as prior games were its graphically beautiful and very easy on the eye. Bringing alive the wonderful worlds all Ratchet & Clank fans have appreciated in the past.

With the release of the animated Ratchet & Clank movie due to arrive in cinemas sometime next year, Insomniac community lead James Stevenson goes into some detail as to how this assisted in the games development:

“We knew early on that we didn’t want to just up-res Ratchet & Clank for PS2,” Stevenson said. “We started out thinking of Ratchet & Clank on PS4 as a ‘re-imagining’ of the 2002 original, revised to tie in with the deeper version of Ratchet’s origin story (as seen in the film). We envisioned a curated Ratchet & Clank experience that borrowed from the spirit of the classic PS2 games while infusing some of the best elements from the Ratchet & Clank Future games.

“We ended up with a new game, with elements based on the original — but now with modern controls, several new planets, new and updated gameplay segments, all-new Clank gameplay, all new boss fights, new flight sequences, and more… all constructed to take advantage of the graphical prowess of PS4.”

Stevens then continued to say that the “majority” of weapons Ratchet used in the original game released in 2002 will not be available. Instead they have created and added many more from the series that followed. One of the new additions will include a devise call the Pixelator which has the ability to transform enemies into explosive 8-bit pixels. That certainly sounds like a lot of fun to me.