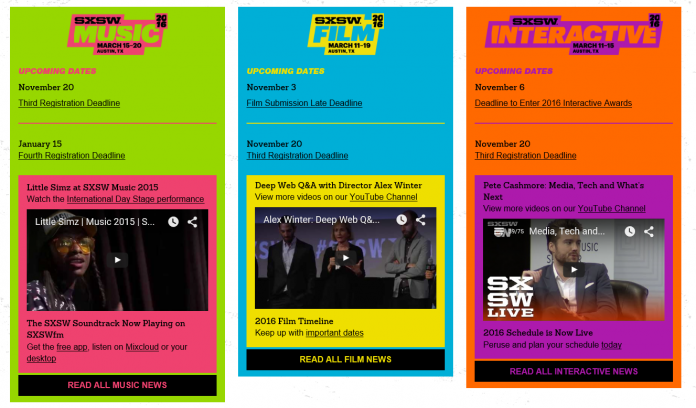 Interactive Director for SXSW, Hugh Forrest, has released a statement today explaining why the two gaming panels for the upcoming event have been cancelled.

Scheduled to take place was a panel entitled “SavePoint: A Discussion on the Gaming Community” and a second “Level Up: Overcoming Harassment in Games”.

Due to “numerous threats of on-site violence” both panels will no longer be taking place in the interest of public safety.

On Monday, October 26, SXSW Interactive made the call to cancel two sessions for the 2016 event: “SavePoint: A Discussion on the Gaming Community” and “Level Up: Overcoming Harassment in Games.” We had hoped that hosting these two discussions in March 2016 in Austin would lead to a valuable exchange of ideas on this very important topic.

However, in the seven days since announcing these two sessions, SXSW has received numerous threats of on-site violence related to this programming.

SXSW prides itself on being a big tent and a marketplace of diverse people and diverse ideas.

However, preserving the sanctity of the big tent at SXSW Interactive necessitates that we keep the dialogue civil and respectful. If people cannot agree, disagree and embrace new ways of thinking in a safe and secure place that is free of online and offline harassment, then this marketplace of ideas is inevitably compromised.

Over the years, we are proud of the healthy community of digital innovators that has formed around SXSW. On occasions such as this one, this community necessitates strong management to survive. Maintaining civil and respectful dialogue within the big tent is more important than any particular session.

The first panel was going to examine and discuss the climate of online gaming along with the long existing issue of discrimination within said community, and focus on trying to find a solution for abuse and discrimination in gaming. A topic we are all too familiar with of late with last year’s GamerGate movement.

So it would seem that hatred wins out once again and that those who yell with the biggest voice get their way. Where does the line get drawn? That we will tolerate this kind of behaviour and allow freedom of speech to be twisted into fitting the agenda of those with a destructive line of thinking has got to stop.

We see this all too well in the gaming community every day, people who are detrimental to the industry getting under the table praise from those on high, abusive messages and videos flooding social media.

At what point is someone with influence going to stand up and say enough is enough and we will not tolerate this anymore?

Why someone with influence you ask? Because clearly the community is not prepared to take ownership of its own right to have a voice in this situation, are not prepared to be counted as opposing what is wrong and simply sit by and watch it happen.

Does this make me mad? You’re damn right it does and it should make you mad too!