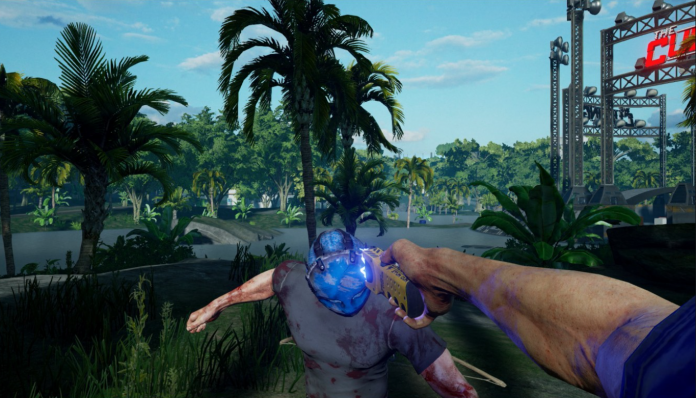 The first thing that came to my mind when I saw this game was HOLY COW! The Culling can be the most frantic, depressing, nail biting experience that one can have in a 20 minute time span.

If you are unable to view the above video, here is a written version:

The game starts you off in a box. Once the timer hits zero it’s no holds barred. You have to scramble to craft or find any weapon possible and somehow stay alive. There are traps both in the map and generated by random players. The 20 minute time block can be the fastest or the longest depending on when or how interact with other players. Let me be frank with you – you have one life to live and if you fail you have to literally leave the game and start again or hang around and spectate those who have not yet met a perilous end. Also, don’t think you can just sit and camp either, the arena changes shape about every 10 minutes and then it speeds up from there, so you better get a move on!

When roaming the map trying to find and/or craft weapons, you also come across random tanks filler with either poison or (if you are lucky) the game currency called FUNC. FUNC can also be found in piles of poop. Seriously, mounds of poop, skeletal corpses or anything that’s dying. You use FUNC to open boxes or redeem at heath stations around the map. There’s also air drops you can call in if you have 100 FUNC to spend. The drops range from contents such as a sledge hammer, ninja sword, machete, as well as explosives. The drops are a part of your selection options located on your menu.

In the menu you will also locate the various load outs you have available to you to choose from. The option of how you play is ours to make, you can either run solo or choose to seemingly strengthen your chances in Team Deathmatch (TDM). It’s all still one life to live even in TDM mode though, you are simply now paired up with another combatant.

During your battles have an announcer who gives you a ‘play by play’ commentary and its done fantastically well. It almost kind of reminds me of the announcer from Smash TV.

Some folks may say the game has a Hunger Games type of feel to it, however I really enjoyed the announcer’s zings and commentaries of the unfortunate deaths during the game.

Another great addition to the games mechanics is all you need to do is look up at the sky to see whose left and who’s met the grim reaper.

Overall I truly enjoyed The Culling. The game does has its flaws but it is still in the very early stages and that most certainly needs to be taken into consideration. The Culling does have great promise and the vibe you feel from playing and the game is rather compelling.

I do wish that you could match make a bit quicker though, however given that this is the Early Access build of the game I am sure this won’t be an issue upon launch.

I also would like to see a bidding feature added to the spectator mode. For example, if you were to die you could bet whatever remaining FUNC you had with other players to see who would win, or possibly call in an air drop for one of the remaining contestants to help them along the way. This would truly make the game even more unique than it already is, and who knows, maybe those features are already being considered for the full release which would be fantastic.

Now the wait until the full release launches later this year has begun, however you can experience The Culling for yourself right now via Early Access. I look forward to running into you all on ‘the island’ where ‘there are no rules’.