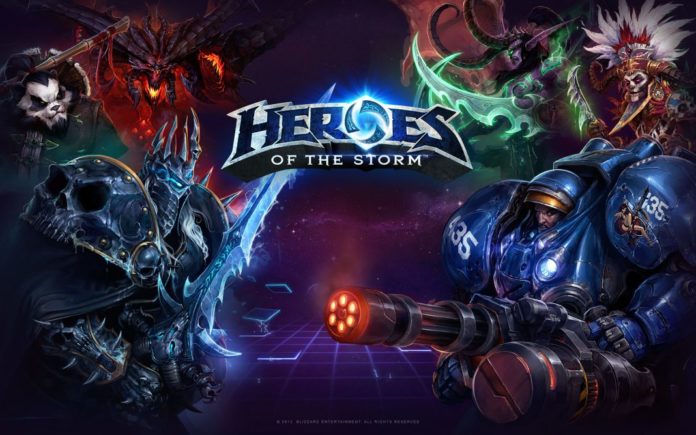 This June, Blizzard will be overhauling the ranked play system for Heroes of the Storm.

The ranking system will now be divided into League Tiers and Divisions. These consist of:

At the beginning of each season your placement will be determined and from there to following 10 matches will dictate where you end up being placed.

Some very detailed information has been released on Battle.net to walk you through all the proposed changes and what you need to get prepared for. We have included the highlights below:

Launching in all regions during the week of June 14, Heroes of the Storm Ranked play is pulling out all the stops and introducing a horde of new features, improvements, and rewards. With division tiers, seasons, high rank recognition, and end-of-season rewards, we think you’ll love what’s in store for ranked Heroes of the Storm.

From Ladders to Leagues

Our new ranked system is divided into what we are calling League Tiers and Divisions. A League Tier is a large bucket meant to give a general idea of a player’s skill level. The tiers in ascending order are: Bronze, Silver, Gold, Platinum, Diamond, Master, and Grand Master. Each tier up to Master League is then broken down into divisions, with the lowest division within a tier being five, and the highest being one. Divisions within a tier designate how close or far a player is from advancing or falling to the next tier. As an example, a player in Gold 1 (Gold Tier, Division One) has a higher competitive rank than a player in Gold 4, and that Gold 4 player has a higher rank than another player in Silver 2.

How strong is your game? With our new league tiers and divisions system, you will be able to easily tell how you rank across the Heroes competitive game modes. At the beginning of each season, a series of ten Placement Matches will determine your initial rank. With each ranked match played after your initial placement, you will gain (or lose) rank points. Earning enough rank points will present you with a chance to move up to the next tier or division by winning a Promotion Match, while consistently losing points will grant you a similar opportunity to defend your current tier or division in a Demotion Match. You’ll know you’re up for a Promotion or Demotion match via a message on the Score Screen and through a special effect played on your Rank Badge after the match. Check out these effects here:

Welcome to the upper echelon. In our new Ranked system, the unique Master and Grand Master tiers will have slightly different rules. Instead of divisions, Master league badges will display the total number of rank points you’ve accumulated in Master league this season, so players can easily track their progression against other Master League players. Grand Master league will be comprised of the top 500 point earners in each region’s Master League. For players in this league, badges will display a number ranging from 500 to 1. This number is a player’s position in the overall Grand Master rankings for their region, which will be updated on a daily basis. Here are examples of Master and Grand Master badges:

Skill-level Queue Restriction: In an effort to make our new ranked play system as fair as possible while remaining intensely competitive, only players whose ranks are within one league tier will be able to queue together as a party in Hero League matches. This means that a player in Gold could only party with players in Silver 5 through Platinum 1. During placement matches players will only be able to party with others doing placement matches, and the system will use current MMR standings as a loose guideline to determine initial tier and division placement. Please keep in mind that this may mean that players queuing together during placement matches could be unable to continue as a party if their Hero League placements are further than five divisions apart.

Silenced Player Restriction: Hero League is meant to be the place to play for competitive, high-intensity matches. This means that communication will be integral to a team’s success. With this in mind, we will be removing silenced players’ ability to queue in this game mode until their silence penalty expires. We hope this serves as a head-up if you’re currently under a silence penalty, as there is some time before the new ranked system hits live servers for penalties to expire.

The introduction of this new system will officially mark the beginning of our first Heroes of the Storm Ranked Season! Going forward, seasons will typically last a couple of months, with season one potentially being a slightly longer exception.

With this initial season roll, we’d like to address some community feedback we’ve received about players feeling “stuck” in their current ranks. In an effort to give these players more flexibility and control over their matchmaking rating, we will be temporarily loosening matchmaking certainty during season one placement matches. This means that these games will have a much more significant impact on matchmaking rating, allowing players the opportunity to make quick and meaningful changes in their MMR.

Battling it out in Ranked play every season is truly an epic challenge, and all epic challenges deserve epic rewards. Players who participate in Hero League and Team League seasons will be rewarded with a practical pile of treasure at each season’s end based on their ranked performance in Team and Hero League. Ranked rewards will be granted based on the highest rank achieved during the season, including preseason. You can earn double rewards for participating in both, so be sure to grab a few friends and form a team this coming season! As for the rewards, keep in mind that later seasons’ rewards may be completely different, but check out what we’ll be granting preseason ranked players at the launch of Season One: