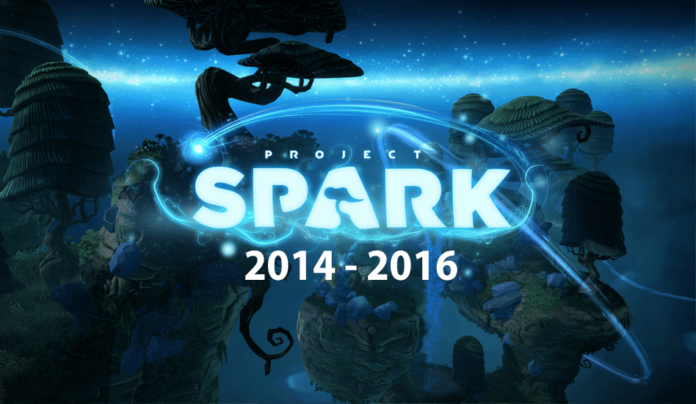 As of today, Project Spark will no longer be available for download from Xbox and Windows store. Project Spark was a game creation video game that gave players the ability to design, build, play and share their creations with the community.

Microsoft and Team Dakota have decided to discontinue support for Project Spark and online services will be unavailable from August 12th 2016. Players will have until that date to download any community creations and user-created content for use offline.

The news was broken via a statement on the Project Spark website from Community Manager, Thomas Gratz saying “This was an extremely difficult decision for our team that we do not take lightly. When “Project Spark” transitioned away from active development last fall, many of our team members moved to other projects within Microsoft Studios. While this means there have been no layoffs at Microsoft, it also means it’s simply no longer feasible to continue the behind-the-scenes work involved with keeping “Project Spark” up and running with meaningful updates and bug fixes, so we have come to this hard decision”

“Despite this news, we want to celebrate the accomplishments of our team and community of creators and players. Our team released 46 content packs, thousands of assets and 16 updates since launch (averaging more than one update every two months). We produced hundreds of livestreams and videos to educate and celebrate our community. In turn, our passionate fans have then gone above and beyond supporting “Project Spark” by uploading hundreds of thousands of creations and dreaming up millions of objects, behaviors, and experiences. Outside the game, they created fan sites, tutorials, forums, apps, and more! We thank everyone who has played or created anything within “Project Spark,” as it would have never existed without you.”

“We can’t thank our creators and players enough. It’s been an incredible journey to share with you all!”

Project Spark launched in Beta in March 2014 before its full release in October and was received very well by the gaming industry. Initially the creation game was supported with microtransactions for content packs until Microsoft revealed the game’s content would become completely free in October 2015 to new and old users.

Did you play Project Spark? Are you sad to see Project Spark Discontinued? Were microtransactions to blame for the demise of Project Spark? Was it too little too late when content was made free? Let us know in the comments below