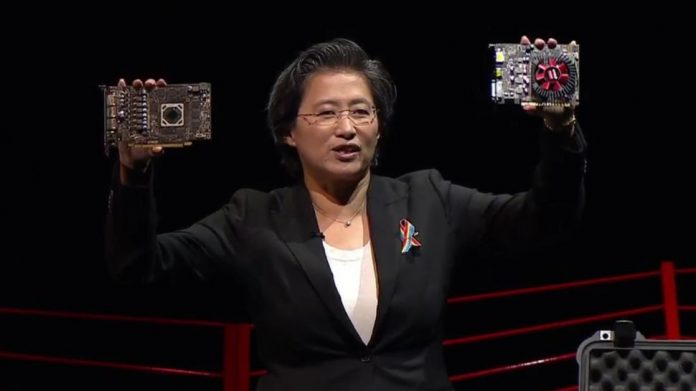 The PC Gaming presser at E3 kicked off in style, and that style came straight from AMD as they could have appeared to be on the ropes slightly after last month’s news from NVIDIA on the GTX 1080 and 1070, but right when you thought they were down, they got, right, back, up again!

AMD CEO, Lisa Su didn’t just announce one new card but three, including the Radeon RX 460 – focussed on esports, with a focus on being “cool and fast” as well as being light on power at only 75 watts.

Also mentions was the RX470, which will be a bit of a beast boasting solid 1080p framerate and cruising 60fps.

But the pièce de résistance of the GPU section of the announcement was clearly their Radeon RX480, which was designed especially for VR. This is clearly the card that AMD are going to try to rival the NVIDIA GTX 1080. More specs will be released in due course.

Next, the Alienware VR Backpack was announced and showed off on stage. Basically, a portable VR machine in a handy backpack from AMD and Alienware. The focus being that if you wanted to, you could go out to a wide open space to play your VR games and not keep “punching the wall”.

Now to be fair, I love the concept, a full VR Experience, anywhere you want to experience it – but can’t help but wonder if the practicality of it might be some way off still. I mean, where would you really play with this? It’s not something I would use for fear of being mugged or pushed over by local kids.

They throw rocks at me already, I can’t risk not seeing them coming.

Next Ms Su announced a close collaboration with Croteam and Devolver Digital for the next Serious Sam game – Serious Sam VR – The Last Hope. Not much more was mentioned, but damn son. Serious Sam VR looks to be something of an epic gaming experience, and definitely a game worth upgrading and getting onto VR for. But it had better be quick, it’s on Early Access on Steam and available Summer 2016.

Finally the AMD section ended with a bit of a whimper to be fair, compared with the rest of their announcements with the announcement of a new CPU – the AMD Zen 4, and from the look of it, it’s designed with Doom in mind.

And that was it from the AMD announcements. They have certainly made a splash in the gaming world, and the NVIDIA GTX 1080 might well be right to look over their shoulder, but until some solid comparisons are done, it’s going to be hard to say right now who has the upper hand. AMD’s cheaper price however certainly makes it a lot more compelling! What do you think? AMD or NVIDIA? Serious Sam VR – does it not look the absolute mutts nuts? And the Alienware VR Backpack – what do you make of it? Let us know in the comments!