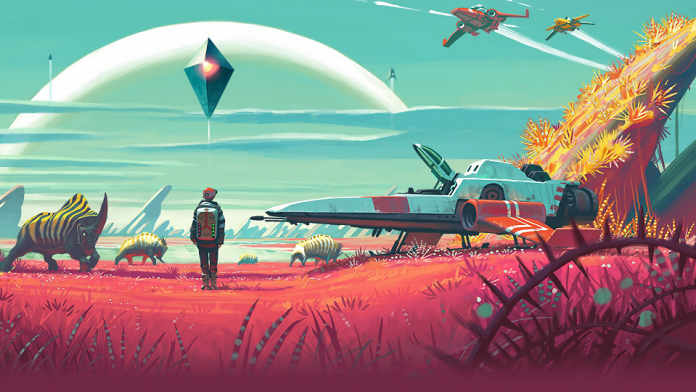 It’s been already 3 years that we started to hear about No Man’s Sky, the PlayStation 4 exclusive game where everything is generated procedurally.  What it means is that everything we see and interact with is generated through a series of mathematical formulas which create the entire world in which we live in this game.

It allowed the developer Hello Games, a small studio of not even 20 people, to create a gigantic world that would not have been possible to create by hand.  There is 18 quintillion planets to explore (exactly 18,446,744,073,709,551,616), with each having its own ecosystem of weather, fauna, flora, etc.  The day-night cycle will even be based on the characteristics of the planet (like rotation, curvature, etc.) and will be almost physically accurate (some compromises had to be done for purely aesthetic reasons).  A glimpse of what can be seen is displayed in this new trailer released today.

The trailer mentions that the 4 key elements in the game are : Explore – Fight – Trade – Survive.  The objective seems simple : try to reach the center of the universe.  To do so, you’ll need to travel and explore planets, which will allow you to gather resources.  These will allow to travel even farther and try to reach your goal.  You’ll be cataloging all lifeforms that you encounter.  There will be aliens that can be met. There will be enemies to counter you. There will be interstellar space combat that seems to be inspired by the dogfighting scenes of Star Wars.  It looks like there will be a ton of things to do in the world.  This game is seen as a survival sandbox game.  You can have a look at a list of other features available in No Man’s Sky in this article found on the Tweaktown web site.

For those that like technology, science and love to know “how does it work”, I found a really interesting video made by GameSpot about the concept of procedurally generated world and the vision and idea behind No Man’s Sky, with some interview bits with one of the co-founders of Hello Games, Sean Murray.

For those that would like to see more trailers and videos about the game, you can go the official Youtube channel of the developer.

The game will be released August 9th in North America, and August 10 in Europe.

I am personally SO excited about this game.  The technology behind it just blows my mind. Even as a programmer, I cannot put my head around the amount of work, science, engineering and mathematics that is needed to create a world with such variety, life and cohesion.  It has been on my radar for a long time and I’m sure it will deliver.  Are you as anxious as I am ? Do you want to play this game ?  Let us know in the comments and forums.