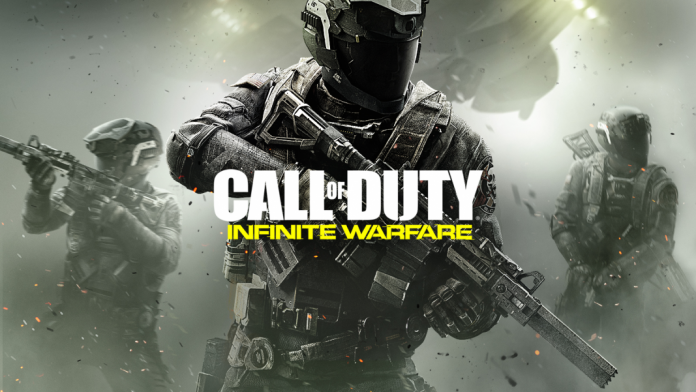 Once upon a time, there was a game called Call of Duty. Just… Call of Duty. No kind of Warfare, no kind of Black Ops, just good old Call of Duty. And you know what, it was really good. No wait, it was fantastic! At a time when games like Medal of Honor: Allied Assault and Battlefield: 1942 were smashing it though, it started to feel like World War II FPS games were reaching their own crescendo, like for the time being, the genre had given all it could. However, then Call of Duty came out and reinvented the genre.

I liken the original Call of Duty to the fantastic HBO series, Band of Brothers. It was gritty, it reflected real battles from World War II – battles and skirmishes like those at Sainte-Mère-Église, Carentan or Stalingrad, as well as having some original content introducing the original Captain Price as part of the British SAS missions. You knew that with every step forward, you were progressing in ending the war, you knew that with every checkpoint reached you had helped. There were a lot of games based around World War II, but for me, Call of Duty seemed to be the first where it felt like you were really a part of it.

This continued with Call of Duty 2 and Call of Duty 3, but by the time CoD 3 came out in 2006, the reinvention of the genre was again starting to reach it’s climax again. Games like Gears of War, The Elder Scrolls IV: Oblivion and Dead Rising were out with the (then) next gen consoles starting with the Xbox 360. Change was needed, but the spine of Call of Duty needed to remain. Which is why 2007 brought us one of the most critically acclaimed games of the decade in Call of Duty 4: Modern Warfare.

Call of Duty 4: Modern Warfare was, I think it’s fair to say, a masterpiece. Infinity Ward knew what was needed and they delivered to such a degree that pretty much any FPS game that came out around it would always be in its shadow. It didn’t just redefine and reinvigorate a theme of game like it did with World War II shooters, it completely took the FPS genre, took it to pieces and made it greater than it was before.

CoD4: MW was beautiful. I remember playing missions like “Crew Expendable” and “All Ghillied Up” for the first time and being completely blown away. I’m sure many, many other gamers felt the same way. It maintained the grittiness that was so recognizable in previous Call of Duty games but brought it to the modern era. What’s more, it all seemed relatively conceivable. When you look at what’s happening in the world in recent years, the rise of the so called Islamic State, Russia’s annexation of Crimea, the Arab Spring – the events of Modern Warfare could, in all honesty, have been very plausible and very possible. This also helped it remain at the forefront of video games. Modern Warfare also added more plot and story to it, perhaps because in the original games the plot was simple – defeat Nazi Germany and end World War II, whereas more dialogue, more setting was required to again give you a feeling of worth, give you a feeling that what you were doing mattered in the wider context of everything else going on in the world. The end of Modern Warfare cried out for a sequel, which would come eventually but Activision wanted one last throw of the World War II dice for Call of Duty, in Call of Duty: World at War.

With more of a focus on the Pacific theater and the Eastern Front in Europe, World at War was again a brilliant World War II game, but stood firmly in Modern Warfare’s shadow. Gamers had a taste for Call of Duty in the modern era, and moving back was not an option for the time being. Although getting scores around the 85% mark, it fell short of what the people wanted, and the people wanted to continue where Modern Warfare left off.

Enter Call of Duty: Modern Warfare 2. Enter controversy on an international scale, enter even more story, enter grand returns, enter a continuation of the grit and sense of belonging that previous games brought by the barrel-load. Enter a continuation of something I’ve yet to mention – the amazing multiplayer. The multiplayer aspect of Call of Duty was prominent from the first installment and was a major reason for the popularity of the games throughout the 00’s.

MW2, as I mentioned, brought controversy, the likes of which hadn’t been seen for some time in video games and certainly not on this scale. This was all focused on the infamous “No Russian” mission, where you had to gun-down innocent civilians at a Moscow airport in a brutal terrorist attack. It was deemed by many as too close to the bone, and with similar terrorist attacks like those committed in 2011 in Norway by Anders Brevik and in Paris last November at the Bataclan theater, you could argue that it was in fact too close to the bone. Personally, I believe in artistic freedom, and if people are inclined to commit these kinds of travesties they will regardless of inspiration from any form of media, be it video games, music, film or TV. Barbaric acts have been committed by men and women since the dawn of time, and since the dawn of time, good men and women have needed something to blame.

Anyway, I’ve diverted a little. MW2 continued in a grand fashion where Modern Warfare left off. With Russian boots on American soil, the game was as near to perfect as any Call of Duty game before or since. I would argue that the Call of Duty series of games reached their absolute peak with Modern Warfare 2, with the series on a slippery slope since then, starting with Call of Duty: Black Ops.

Set in the 1960’s at the height of the Cold War, Black Ops was released in 2010 to fairly mixed reviews. The interactivity of the game was heavily criticized and it was shipped with too many bugs. It really wasn’t that good, however its redeeming feature was the multiplayer, especially the Zombies aspect, which has remained popular and will be a part of the upcoming Infinite Warfare game.

Following Black Ops, the Modern Warfare trilogy had to come to an end, and it did so in spectacular if a somewhat more Hollywood style than we were perhaps used to, with Modern Warfare 3. MW3 continued only a few hours following the brutal climax of MW2, and was incredibly fast paced. The Russians were still in the US and were advancing through Europe, the series antagonist, Makarov was still creating havoc and the dynamic duo of Price and Soap were were hunting him down. The game seemed to be almost trying too hard to be liked and surpass previous Modern Warfare games, but as I say, with more Hollywood influences with scenes like the Eiffel Tower collapsing and the fate that befalls Makarov. One thing was certain though – the spine, the heart, the soul of Call of Duty was minimal in Modern Warfare 3. It passed muster, but only just – this was mainly due to it being the 3rd part of the Modern Warfare trilogy.

The following few years felt like Call of Duty had lost its way. There were 2 more Black Ops games, which boggled my mind at least, Call of Duty: Ghosts was released seemingly trying to capitalize (albeit 4 years late) on the popularity of the character Ghost from Modern Warfare 2. This was loosely based on an alternate timeline to Modern Warfare, where a federation of South American countries united following the Nuclear annihilation of the Middle East and reeked merry Hell in Central America and the Caribbean. However, in terms of Call of Duty games – Ghosts was panned. There have been rumors for years of a possible Ghosts 2, but I seriously doubt it. 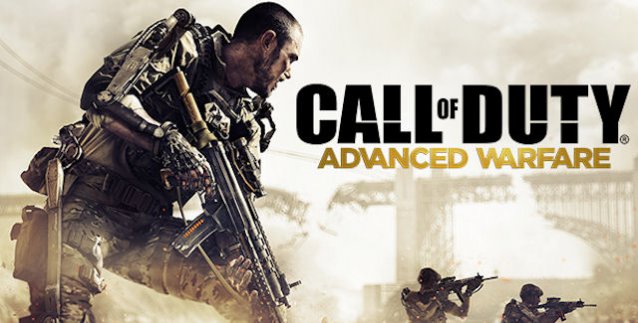 There was a slight improvement with Call of Duty: Advanced Warfare, but again the series marched on away from the grit and realism that made the franchise so incredibly popular and took further lurches towards a more Hollywood style. Call of Duty no longer felt like Call of Duty… and to be honest it hadn’t done for a while.

Now what do we have? Call of Duty: Infinite Warfare. Sigh…

Now I’ll be honest with you. I have – on occasion – mocked Infinite Warfare in the digital office of Real Game Media, and incurred the wrath of our Editor in Chief, Bella Ryse on more than a few occasions as a result of this. However, I’ll be completely honest with you. Call of Duty: Infinite Warfare looks good. Actually it looks very good. It looks like a fantastic new approach to the Call of Duty series and a welcome advancement like Modern Warfare was to the World War II games. Space based games are huge right now, games like Star Citizen, No Man’s Sky (OK perhaps a bad example), EVERSPACE and Mass Effect: Andromeda are huge talking points and Call of Duty moving in this direction is a good thing I think. However, there’s one problem…..

It’s NOT Call of Duty. Call of Duty hasn’t been Call of Duty since 2009. Not really, not properly. Infinite Warfare looks amazing, but it doesn’t look like Call of Duty. I, and many others, may be proved wrong on release. It might just return to the grittiness that was so prevalent in the Call of Duty games of old. A Google image search of “Call of Duty then and now” will illustrate this better than anything I can say will. Here is what I mean. 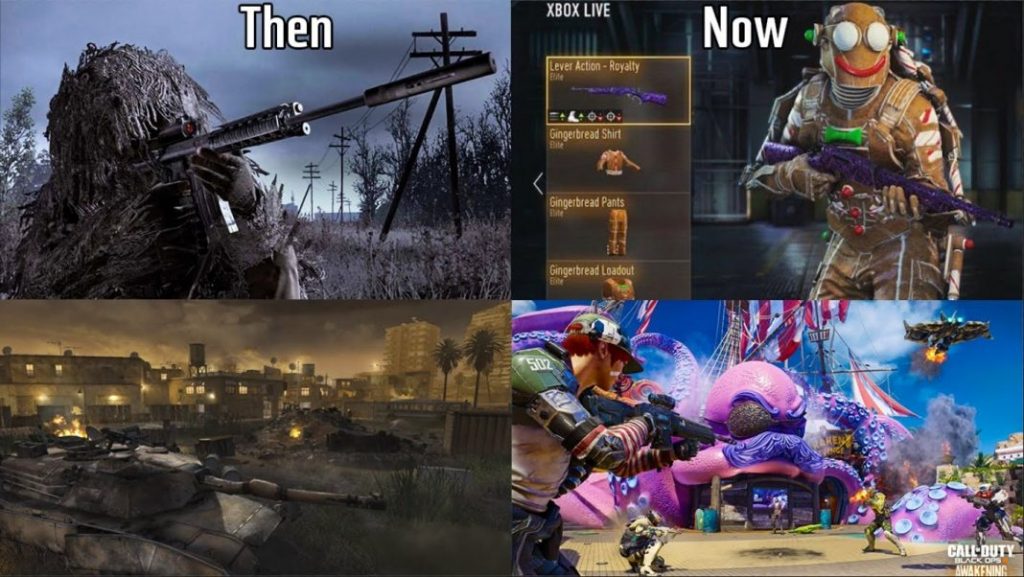 Call of Duty was muddy, wet, real, brutal, engrossing, immersive and stunning. Now it’s so far away from what made it what it was, that it’s almost an insult to call the games they’ve been churning out over the past few years Call of Duty. It has truly mutated and changed to such a degree that it is barely recognizable anymore.

Thank you so much for hanging in there! What do you think about this? Has Call of Duty forgotten its roots? Do you agree or disagree? You tell us in the comments below, on the RGM Forums or on Twitter.