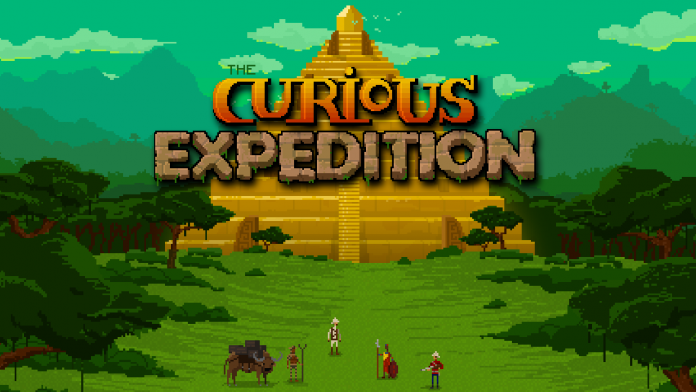 Have you ever dreamed of exploring dense jungles, desolate deserts or dangerous drylands in search of fame and wealth? Could you handle the company of diverse companions, some of whom may be kleptomaniacs, racist, sexist or alcoholic? Ever wanted to go toe to toe with gorillas, tigers, maybe even a giant crab? If yes to any of these, then this is the game for you.

Having been in Early Access for around a year, The Curious Expedition has recently had its full release. I’ll be honest, I hadn’t heard of the game before, so this was the first experience with the game I’ve had, and I couldn’t say what’s different now from earlier releases, even after watching a couple of videos from the early days. However, if the game had any issues before, it seems they’ve been improved for the full retail release, as I can’t find too much to complain about.
Set in the 19th century, you choose from a selection of famous names from the past such as Charles Darwin, Marie Curie and Richard Burton (I’m assuming not the actor). You unlock a multitude of other explorers as you perform different actions in the game itself (For instance, blowing up a mountain lets you play as Nikola Tesla). You also get related items and companions to bring along on your first expedition, ranging from mystics and shamans to soldiers and, at one point in my adventure, a blonde boy and his trusty dog. I’m hoping for Cpt Haddock DLC.
The aim of the game is to compete against 4 other explorers to gain the most fame after 6 expeditions, and have yourself immortalized in statue form in order for future generations to remember how awesome you were. Fame is achieved through finding relics on your adventure, culminating in the discovery of a golden pyramid in each area. The first explorer to find the pyramid gets a nice bonus, with smaller amounts of fame the slower you are. This adds an element of speed to the game, as you lose time quickly by exploring areas and resting.

On top of this, you have to keep your sanity meter up in order to move. each tile requires sanity to move to, but different terrain require certain tools to help reduce the amount of sanity used up. For instance, climbing gear will let you climb a hill with ease, which in turn reveals a large amount of the map in order to help you plan your next move. Resting in villages is a good way of regaining sanity, but make sure you have good standing with the natives or things could get messy.
Combat involves a dice rolling mechanic which is simple to use. Each member of your party gets a die, some might have more. Weapons also add to the tally. When you roll, you can make various combinations to cause more damage, or defend your party with greater success. You can also flee at any point, but this could have serious consequences for your party. 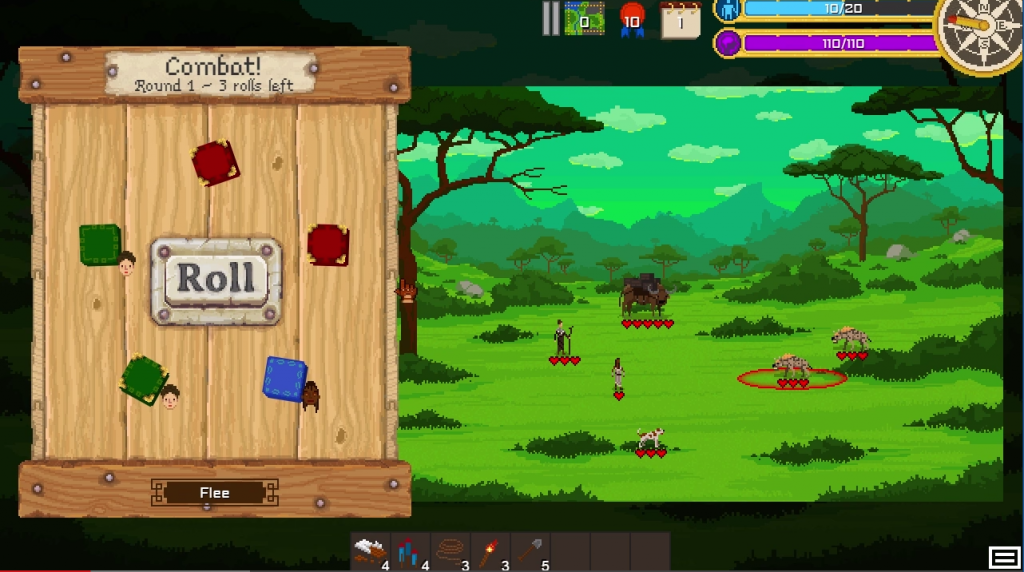 Keeping your party healthy is important, as untreated wounds can become infected, slowing things down or leading to a rather unpleasant demise. You can acquire items to heal your party, so it might be advisable to stock up before each expedition (trust me on that). Adding to the danger, the environment itself could be your doom. For instance, you may come across some ancient ruins, and fancy the golden idol within. Sometimes nothing happens, sometimes it causes something very bad to happen, so be sure to plan an escape route or be prepared for a deadly fall down a bottomless chasm.
The first expedition is fairly easy, breaking you in gently before the difficulty ramps up in later journeys. Each map is unique, as it is randomly generated, so no adventure will go the same way. So that, multiple options during the expeditions, and the various perks each explorer and companions offer come together to make a game with a lot of replayability for those who fancy it. So if you remember those old adventure shows like The Lost World, give this game a go. It’s simple gameplay and charming style could be right up your alley.

Which roughly translates as…