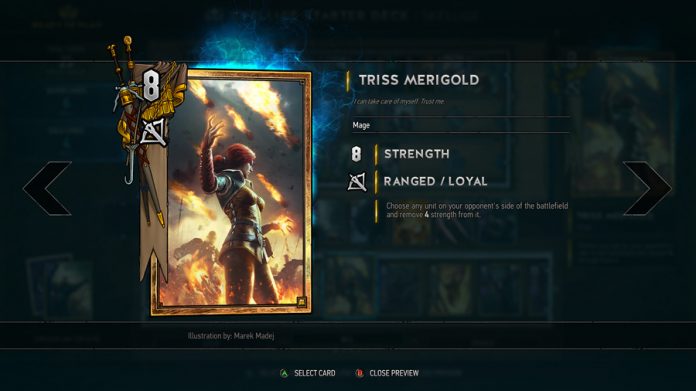 The Witcher 3: Wild Hunt is arguably one of the best games of this generation and the multitudes of awards thrown it’s way can attest to that fact. While Geralt’s adventures were exciting, many players also heaped praise upon the game within the game. I’m talking, of course, about the collectible card game, Gwent, which is playable at many a tavern and muddy street corner around the expansive world of The Witcher.

Such was the popularity of Gwent, developer CD Project Red have constructed a standalone version of the card game which has just entered closed beta on PC and Xbox One. Apparently, PS4 gamers will get their chance to play “later”. Savvy Gwent fans have probably already signed up for the beta and should be receiving keys now. However, if you are keen to try the game, there is still time to register at their website.

For those who still have no idea what Gwent is, take a look at the official trailer below for a look at it’s card collecting goodness:

Do you enjoy a friendly round of Gwent with your fellow witchers? Let us know in the comments or on the RGM Forums.