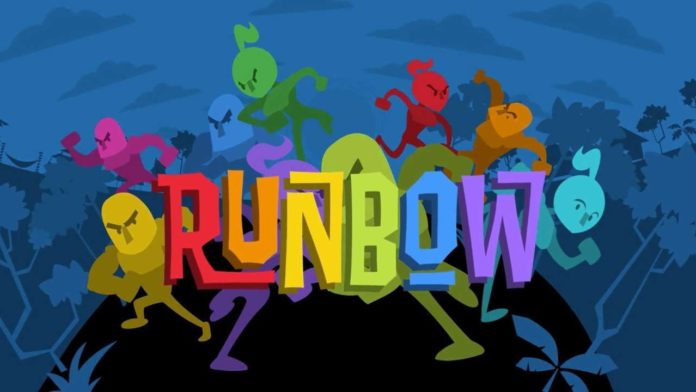 Runbow is a ‘platform, racing combo’ developed by 13AM Games. The aim of the game is to be the first to get to the trophy at the end of the level. Players jump, run and attack there way to the end whilst trying to not fall behind. But this isn’t your standard side scrolling 2D platformer, oh no.

The first thing that grabbed my attention was the stylized look of the game. It has a sort of ‘papercut’ look; mixed with the choice of vibrant contrasting colors it looks very unique. While it is unique it is a little hard on the eyes sometimes, especially when the game gets more hectic, there is a lot of contrasting colors and changes.

The main mechanic of Runbow is the color; the background has different colors which scroll independently of the player. Certain objects if they have the same color as the background disappear, however, if the background is in another color than the object it is solid. This allows for strategic use of the scenery and you will need split second timing at times to make sure you don’t fall foul of a trap or pit. This could be walls, spikes or even platforms needed to progress further through the level. It is a great mechanic that I haven’t seen anywhere else and it works really well.

This combined with traps and various enemy types make for some challenging gameplay as you progress. The abilities you’re given as a player also play a role since you’ll often need to destroy enemies or just smash through a wall here or there. Even though combat isn’t the focus it does add to the overall experience and melds well with the platforming. You also can choose which level to go on the larger stage. if one is too hard you can just go to another one instead. Even for someone like me who is normally very good at platformers, i found it very difficult at times. 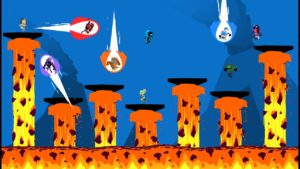 The music is decent and it changes depending on the level to match the theme, the genre is mainly jazz. It doesn’t really hinder or help gameplay so it’s kind of just ‘there’. Player sounds are also kind of just there; everything sounds the way you’d expect. Though it all fits well with the action and adds to the hectic nature you feel when it all gets a bit full on.

After awhile I realized I had been playing for hours. Even after stopping and returning to the game I still found it enjoyable and challenging for hours. And it only gets crazier, the game supports local multiplayer (up to nine players which is massively impressive). I was able to play with friends and we all had a blast with the color mechanics and we all thought that the game worked well. Although you might think it was hard to keep a track of what was going on, none of us seemed to think this was the case (well no one said anything). 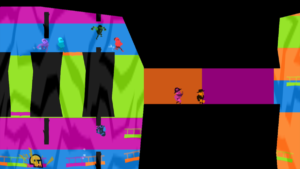 Players can play in a variety of modes including: head-to-head in Run, Arena, King of the Hill, and ColourMaster. There’s even an adventure mode and a mode called ‘The Bowhemoth’, a challenge mode designed to really test your skills. Add on to that a level creator and you have a massive amount of content for only $15, bargain!

All in all the Runbow is solid with the only real issue being that the controls which are a little bonkers to start with but you can change them in the menu so it doesn’t really matter. Multiplayer is great fun and reminds me of Cloudberry Kingdom, it’s fast and frantic and a great laugh.

Runbow is available on Wii U, Nintendo 3DS and Steam. There is also new DLC released for the game, adding even more content to it.

If you’ve played the game, let us know what you think in the comments below or on the RGM Forums.