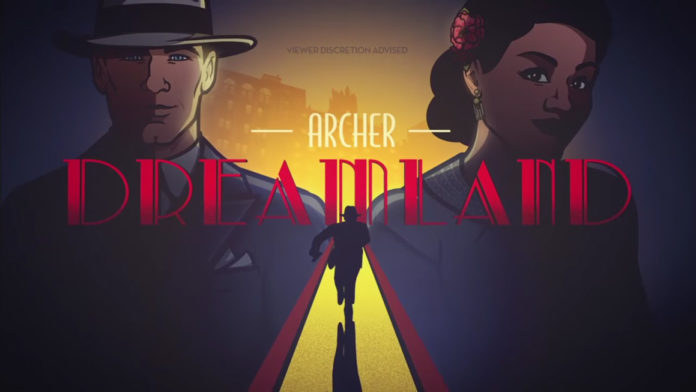 We reported back at the start of the year that this year’s season of Archer would be taking us in a different direction. We know from the end of season 7 that Archer was left floating in a Hollywood celebrities swimming pool. Presumably, with at least three seasons to go, he won’t be dead, most likely in a coma whilst he tries to uncover the secret as to who murdered his partner, whilst in ‘Dreamland‘.

A press release from FX (featured on Polygon) confirmed this information:

“The case proves to be more difficult than expected after Archer quickly gets mixed up in a deadly game of tug of war between Los Angeles’ most powerful crime bosses. Every clue leads Archer further away from his goal and deeper into a mystery involving kidnapping, prostitution and drug addiction.”

Check out the new trailer here:

The trailer showcases a fair amount of cool new stuff and also the return of all our beloved characters. In their new Dreamland roles of course. We also see the return of Barry Dillon, Archer’s cyborg nemesis, who is presumably not a cyborg this season. We also see Len Trexlar, head of ODIN, one of ISIS (original name for spy agency that Archer worked at) competitors, which is interesting.

It is unclear at this point as to whether the 1920s setting will be for the entire season. Though it is possible we will not find out what happens to Archer before season nine. This isn’t the first time Archer has changed its setting; season five’s story moved away from the spy agency to Archer: Vice, where the team became drug dealers, before becoming a detective agency.

There are a lot of explosions and guns fights too, as you would expect. Dreamland, interestingly, is the name of the club where Lana seems to perform. Archer Dreamland airs on April 5th on FXX.