Hollow Knight is an upcoming 2D action adventure game filled with bizarre creatures, inter-connected worlds and quirky NPCs. Take to the mysterious underground to unravel the secrets of a forgotten kingdom. The developers of Hollow Knight; Team Cherry, consists of only three people who all have a shared passion and unique role in the creation of the game. What started out as a project on Kickstarter turned into reality as 2,158 backers funded well over the original goal of $35,000.

The developers put an emphasis on exploration and adventure as you will be able to find hidden pathways and enemies throughout the game. There is sure to be a plethora of unlockable items, spells, and abilities as you progress through the story. The art style is  dark and eerie, but full of charm; reminiscent of games like the Don’t Starve series. The animations are all done by hand which really breathes life into the characters. 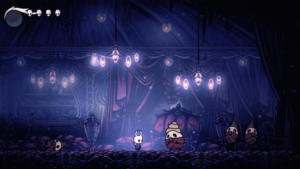 Hollow Knight is being developed using the Unity Engine, and will therefore run at 1920 x 1080, 60fps.

Hollow Knight will release February 24 on Steam. Originally due for a release on Wii U, Team Cherry ran into issues with hardware limitations and stated via their website:

“Our Wii U release has recently been hampered by several technical challenges and though we’d love to see Hollow Knight on our favourite console, we feel the quality difference would end up such that Wii U players will be experiencing a lesser version of the game.”

Instead, Hollow Knight will be releasing on the Nintendo Switch later this year. Will you be picking up a copy on Steam or will you wait for the Switch release? Let us know on Twitter, Facebook, or in the comments below!