Hunter’s Legacy joins the never-ending growing horde of 2-D Metroidvania style games but, like so many, it fails to break the mold into something new.

At first glance, the cat filled world of Hunter’s Legacy is bright and colorful. Its environments make players reminisce of games like Castle Crashers and Braid but it quickly never grows to create something of its own. While the idea of a cat filled world facing a catastrophe sounds like the ultimate internet connection but, it really isn’t anything different. 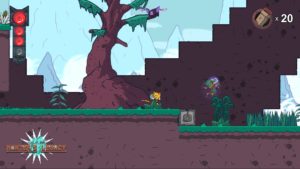 The gameplay is very akin to the genre. The player uses an arsenal of weapons like swords and bow and arrows to assault the onslaught of enemies while platforming around each level. While it may seem that the main scope of the game revolves around precise platforming it actually truly revolves around backtracking. While the metroidvania genre is built off of backtracking Hunter’s Legacy takes that concept to an entire new level but, not in a good way. The backtracking hardly feels rewarding as it seems more of a way to extended the gameplay rather than give it depth. Nearly every level contains some type of backtracking leaving the player quickly frustrated or bored after completing a level only to go back and essentially complete it again. 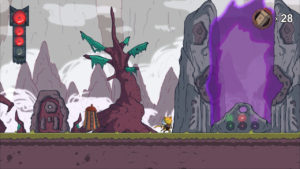 The story for Hunter’s Legacy takes the usual action tropes. The world is facing its end and only you can bring peace back to the realm. While Hunter’s Legacy does try to mix it up with having the world being filled with sentient cats, that just doesnt’ do enough to truly entertain the player. With it’s lack of interesting characters and the average conflict that the player has to face, you will quickly forget the story all together as you face the countless hordes of generic enemies. 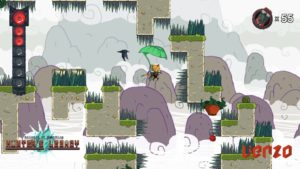 Sound for Hunter’s Legacy doesn’t add much to the games overall setting or genre. While Castlevania is known for its dark and harrowing soundtrack and Metriod is built on the haunting sci-fi feel the sound creates, Hunter’s Legacy just feel painfully average. It is nothing you can truly hold against the developers but it just cements the point of Hunter’s Legacy never being able to stand on its own two feet.

Hunter’s Legacy is not worth the second play through but not because the game doesn’t offer enough, in fact it is the opposite. Since the game is so heavily focused on backtracking nearly every level, by the time you finish the game it will feel as if you have already played the game through twice.