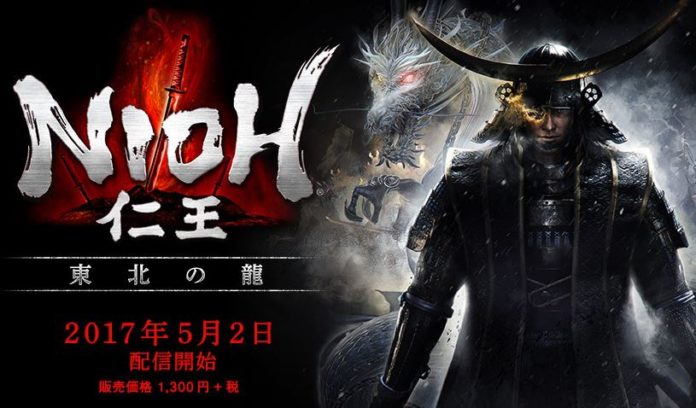 If you love a game that punishes you but is somehow still entertaining and addictive, then chances are you are playing the PS4 Exclusive NIOH, and loving it! We have been waiting for more details to be revealed regarding the first story DLC named The Dragon of the North (as it’s named in the west however, known as ‘The Dragon of Tohku’ in the east) and now we have it.

This DLC comes with a heap of new fun and deadly additions to the games such as:

The release date is set for May 2nd with a purchase price of 1,300 yen which translates to roughly $11.77 USD at the time of this article.

Along with this DLC on May 2nd, you can also look forward to an update that will add online PvP and a variety of other bits and pieces that are yet to be divulged.

We will keep our eye out for further details regarding the contents of the update and let you know more when we find out.

In the meantime, here’s a bit more about NIOH if you haven’t yet had a chance to encounter it:

Nioh is an action role-playing video game developed by Team Ninja for the PlayStation 4. It was released worldwide in February 2017, and was published by Koei Tecmo in Japan and Sony Interactive Entertainment internationally. Gameplay revolves around navigating levels and defeating monsters that have infested an area. Nioh takes place in the early 1600s during a fictionalized version of the Sengoku period, when Japan was in the midst of civil war prior to the ascension of the Tokugawa shogunate. A sailor named William, in pursuit of an enemy, arrives in Japan and is enlisted by Hattori Hanzo, servant to Tokugawa Ieyasu, in defeating yōkai that are flourishing in the chaos of war.