Metroid fan and music composer Alexander Brandon has announced he’s working with Retro Studios on a new project. Could it be a new Metroid for the Nintendo Switch?

In a Facebook post last week, Alexander Brandon talked about his past projects and then mentioned that he’s working with Retro Studios. This kind of partnership certainly raises eyebrows. 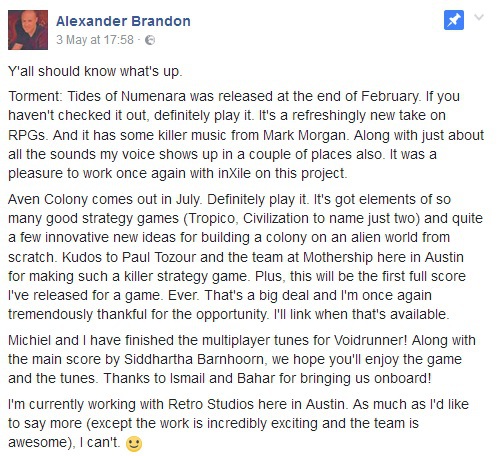 Although this does not confirm a Metroid game, there is still a remote possibility. Retro Studios has worked on past Metroid titles for Nintendo consoles, from the GameCube to the Wii’s Metroid Prime: Trilogy.

Then there are these tweets from earlier this year that seem to suggest that Retro Studios will not be working on a Metroid title. The plot thickens.

Haven't seen OBE1's vid yet but you know I've been saying Metroid on Switch is happening for a while now. I have his back on that part.

I don't know his sources but RE: Metroid @OBE1plays vid holds water. Metroid in Dev, not Retro developed.

Very interesting stuff. With these kinds of conflicting reports and rumors it’s pretty difficult to gauge who’s right. Regardless of the developer, it certainly seems like a Metroid title is coming to the Switch soon. Hopefully we’ll see some announcements at E3 2017 that might help clear things up.