The ocean of video game rumors has been very turbulent and stormy over the last few days. Several possible leaks, rumors and comments have indicated that among other things, a new Fable title may be in the works. Is there any truth to these rumors? Let’s dive in and see if we can separate fact from fiction (as much as is possible). Bear in mind that most everything discussed is still a rumor, even if it’s likely true.

Where did this all start?

While there have been low rumblings and whispers of a new Fable ever since the disappointing cancellation of Fable Legends and the shuttering of Lionhead, the first tangible proof came in the form of a post on the ResetEra forums. First though, a bit of background. Now, the person who made this post is not just some random individual, he’s actually the guy who leaked almost the entirety of Xbox’s E3 2016 conference (you can read that post here).

As you can see, most of what he predicted from his access to the Xbox API came true. Therefore it’s at least worth considering something he has to say.

So, under the username Klobrille, he posted a list of things on ResetEra gleamed from accessing the Xbox API, prefacing most with “I would like to see” instead of stating of something as 100% fact. You can find the post here.

While these are fascinating rumors, we’re going to focus on the very first for the purposes of this article. Klobrille says it’s possible that a new Fable is being developed under the name Project Wisdom by a UK studio. Now, what UK studio would be equipped to handle such a task?

What’s Playground Games up to?

For some time now, we’ve known that Playground Games (developers of the critically acclaimed and commercially successful Forza Horizon series) were recruiting for some sort of big RPG. We also reported last year that this new game required Playground Games to open a second studio. Job listing descriptions stated that those who applied would be working on a “AAA open world action / RPG project.” Playground Games is located at Royal Leamington Spa in Warwickshire, UK.

Now, the assumption of many, including myself, was that this would be for some sort of new multiplatform RPG, that Playground Games was working on something that wasn’t exclusive, unlike the second-party relationship they have with Microsoft to develop Forza Horizon.

In light of this new (possible) leak however, it’s entirely plausible that Playground Games has actually been trusted with developing a new Fable game. They’ve shown immense care and quality with Forza Horizon, so with some fresh talent and new talent capable of working on an open world RPG, Playground Games handling Fable begins to sound like a great idea.

In addition to everything above, there’s more evidence that is beginning to crop up. Jez Corden, Senior Editor at Windows Central, made these posts on Twitter:

Still trying to lock it down 100% but lots of separate sources told me stuffs.

Jez has a history of accuracy so there’s no reason to doubt his word.

It doesn’t stop there though. Don Williamson, formerly of Lionhead, took to Twitter to speculate that he knew who Microsoft had developing a new Fable. While he later deleted his tweet, you can see one of his responses here: 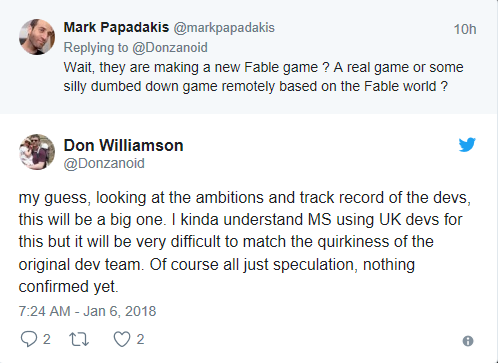 Is it outright confirmation? No, it’s not. It is however another small piece of evidence clicking into place.

When I wrote about what I expected from Sony, Microsoft and Nintendo this year, I pointed how Xbox needed to be willing to show us what was coming in the future. I also stated that just one new studio and new IP would mean massive things for Xbox as a brand. While this wouldn’t be a new IP, having a big open world RPG in a new Fable, developed by Playground Games, would be a huge confidence boost for many Xbox fans. Not only that, it would fill a critical hole in Xbox’s lineup that has been empty for some time.

While I obviously can’t guarantee that it’s true, in light of all this evidence, I believe more likely than not we’ll be seeing a new Fable title.