A review copy of the game was provided to Real Game Media, courtesy of PopAgenda

When I first saw this game, at Montreal ComicCon in 2017, Berzerk Studio’s booth had loud music with resounding bass, and a large screen with 4-player coop. Their presentation was definitely something that attracted me, especially when I heard the theme song from the movie Mortal Kombat. After demoing the game there, I knew I had to get my hands on it when it released, because it was a LOT of fun. Now that we have it, here is my review of the final product.

While there are many game modes available, the single-player experience, includes a simple yet effective storyline where we see a blue happy world being corrupted by an evil pink monster. Your objective is to embark on a journey to save your blue square friend that is being affected by this corruption. There are over 20 “levels” (music tracks) in the single-player mode. It made me smile many times, which is the only thing I was hoping from an artistic musical game. 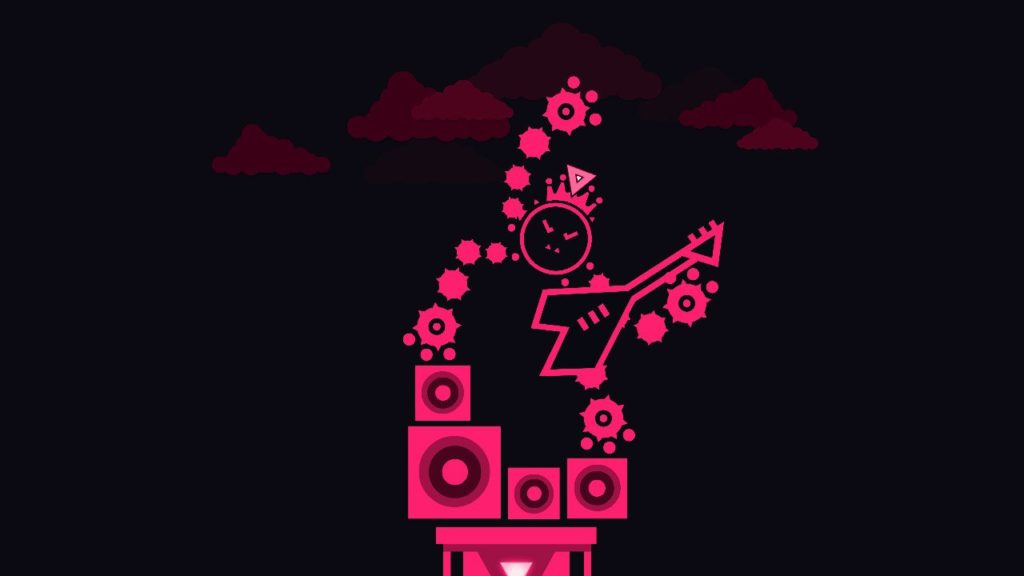 The gameplay is really simple-to-understand but hard-to-master. Your single objective is to survive. As a little blue geometric figure (a blue square in the story mode, in multiplayer, you play as 4 different shapes) you have to avoid all of the obstacles thrown at you. Some levels are stationary in a single screen and require you to complete the entire song without dying. In others, you travel horizontally. During these levels, you have checkpoints that you can reach to avoid restarting at the beginning. You have 3 weapons: 1) A boost button which allows you to travel a very short distance while being indestructible 2) Your sense of rhythm 3) Your reflexes.

The invincible boost is something you learn to use quickly, because some of the level design is meant to use it. Level design isn’t the most complicated I have seen however, certain levels demand incredibly precise movements to succeed. The best way to describe Just Shapes and Beats is a bullet-hell non-shooter game.

I played the game on the Nintendo Switch. I highly recommend playing with a Pro controller due to its analog stick. This will give you a better level of control than playing with a Joy-Con, as the timing felt a little off sometimes. 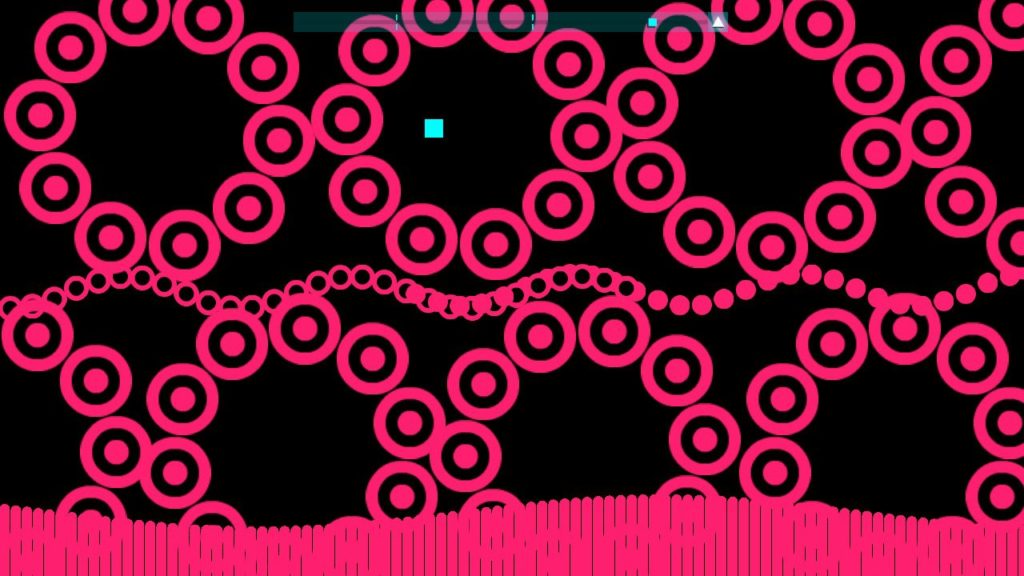 There are a number of modes that are available in both single and multiplayer locally. The first one is called playlist. In this mode, you select a playlist of songs that you have unlocked, selecting the level of difficulty (casual or normal). Naturally, in order to unlock all songs, you must complete the story mode and play the challenge mode. 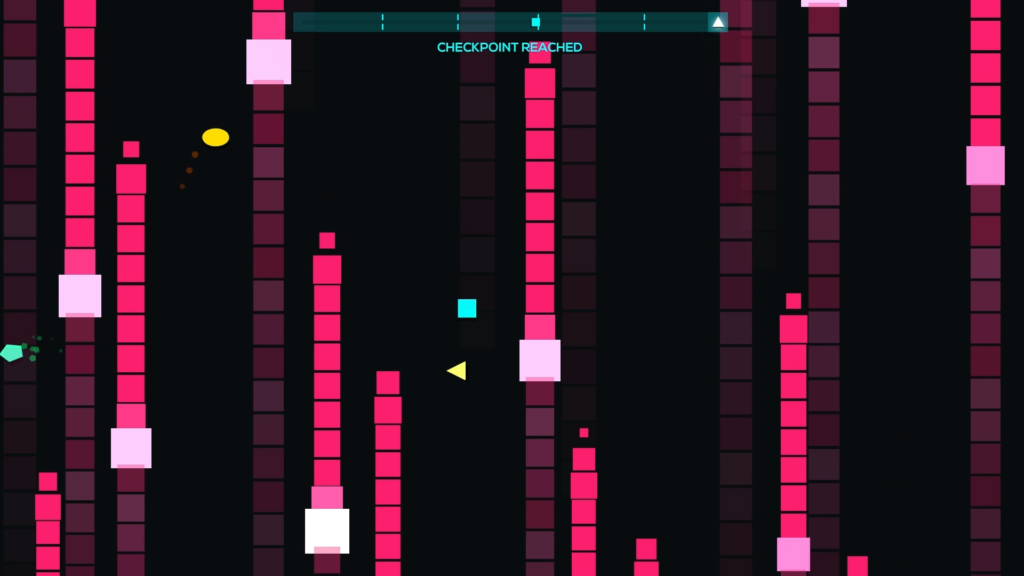 The main competitive multiplayer mode is called challenge. It allows you to play online or couch coop up to 4 players. Each challenge consists of 3 rounds. The very pleasant surprise in this mode is that you don’t have to unlock any songs to play it. Players can choose between a random selection of 3 songs from the entire soundtrack, and the one with the most vote wins.

There is also another option called party mode. The rule: having fun while staying alive with friends. Levels are put in a super easy mode, the music is non-stop and the winner is based on the score each player achieves.

With this variety in game modes, there is a lot of value and replay-ability. 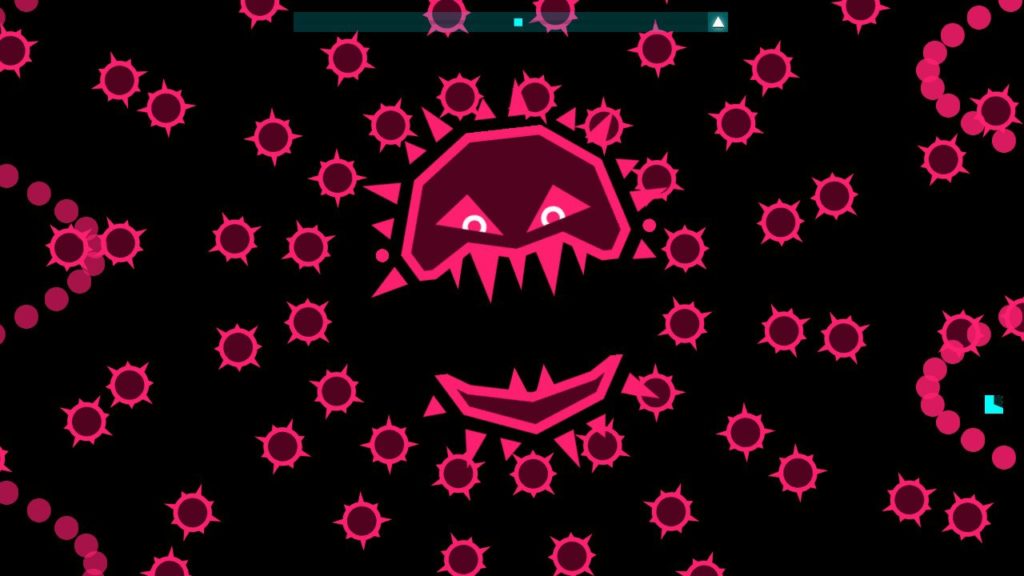 It shouldn’t be a surprise that music is an integral part of the experience in a game called Just Shapes and Beats.

Each level in both single and multiplayer modes is based on a song from a list of more than 30 items featuring artists from the chip tunes/EDM genre. Consequently, the sound and level design for obstacles are integral to the notes/sounds and tempo of the song. For example, you might see drops of rain when the song has a sound effect similar to this. It is the same thing for saw blades, explosions and so forth.

Everything feels connected and vibrant, it feels very…alive. With this coordination of light and movement to the rhythm of the song, the ensemble is very artistic. In this zen-like atmosphere, we forget that there are only a few colors in the entire game.

Have you played this game? Let us know what you think in the comments below or on Twitter!